Every Tuesday a new 6.5" block pattern is posted at the Canadian Quilters Association website and I thought I might just follow along. It's 52 blocks in 52 weeks and since I have so much fabric to use up and since they don't take long to make, I am hoping to keep up. 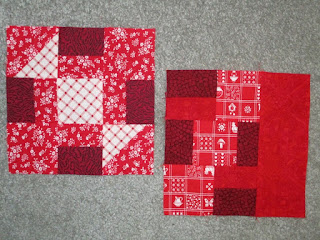 Here they are together. Week one on the left and this week's block is on the right. The patterns call for three different fabrics and I decided to stick with one colour in three shades.
Posted by Dolores 4 comments:

My eldest daughter Laila requested a mug rug for her office. I had made a few and so I knew what I was doing. Since she didn't say what she wanted on it, I decided to capture something that she was interested in. Photography is one of her hobbies and she has always enjoyed reading. 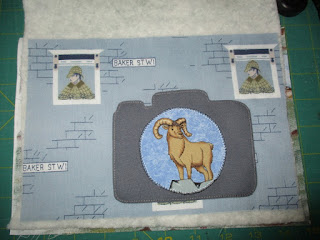 I had the background fabric and thought that it was almost perfect. 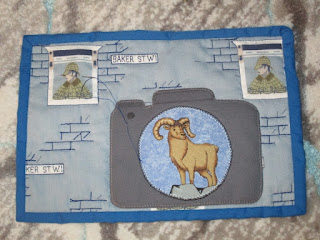 The camera outline was a free pattern that I found online and instead of just keeping the big lens circle black and boring, I figured I may as well do some fussy cutting. 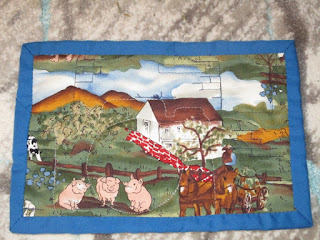 This is the reverse side. I thought that if she got bored with the camera, she could look at this scene.

I've got a couple more mug rugs to make but right now I have some little people sewing to finish up.
Posted by Dolores 3 comments:

There are so many blocks of the month starting up right now and it's hard to decide which one I want to follow - if any. The Canadian Quilters Association has a mystery beginning but they also have a block of the week that I thought I might just do. It's 52 blocks in 52 weeks. Every Tuesday they have a new 6.5 inch block. You don't have to be a member of the association to participate. 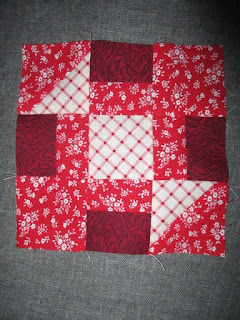 This is the first block. One can use three different fabrics and I decided to go with just one predominant colour.

It will be interesting to see how long I last with this. 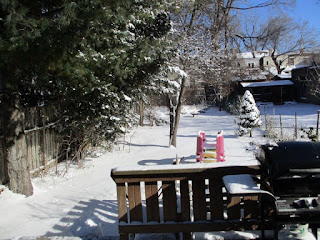 We had some light snow fall yesterday and it stopped sometime late last night. I went out and swept twice yesterday and I was going to shovel this morning but out neighbours beat me to it.

I'm trying to finish off a few things. I did knit a hat and I sewed some new pants for my youngest granddaughter, Wren, but I totally forgot to take a photo of them before I handed them to the recipients. Oh well. The hat is the same as the ribbed hats I showed before but this yarn (Patons Decor) was the nicest colour yet and I will be making more pants for my little granddaughter so hopefully, I will remember to take a photo of them.
Posted by Dolores 2 comments:

One of the guilds I belong to put out a request for some placemats that were to be handed out at Christmas with Meals on Wheels. Since I use polyester batting, I didn't know if I could participate. Well, the night I attended the meeting it turned out that someone in the guild had supplied some flat batting and some backing fabrics if there were people willing to sew up some placemats. I grabbed some batting pieces and brought them home. I knew I had Christmas fabrics that I wanted to use up so here's the result. 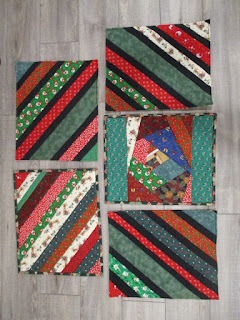 Five placemats completed. Two had binding and when I showed my quilting buddy Marg, she suggested that I make them pillowcase style so I didn't have to do that extra step of cutting and sewing on binding. I must say, it went together a lot quicker. I just quilted in the ditch and actually, I machine finished the sewing of the binding. 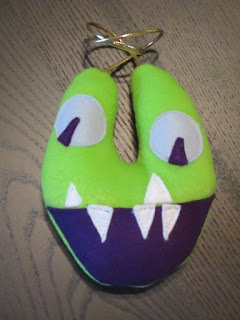 I forgot to show this last year. Just before my two eldest grandsons came for a visit in November, my daughter Laila, their mom, informed me that Patric had a loose tooth. I had been meaning to make him his very own monster tooth fairy pillow and so I got moving and produced this. Before I even planned it or sewed it, Patric's tooth fell out. Oh well, I hope it comes in handy for future baby teeth.


I have made other things but because they haven't yet been given to the recipients, I can't show them just yet.
Posted by Dolores 3 comments:

Something old and something new

Now that the holiday season is officially over, I have time to get some sewing and knitting done.

My eldest son Mark, turned 40 last week (January 2nd) and he had a party for family and friends at a legion just after Christmas. A fun time was had by all and there was a time when his friends, siblings and wife spoke about him. Some roasted him and others thanked him for being the person he was. I was asked by his middle sister Maili, to re-make a hat that he wore in his younger days. 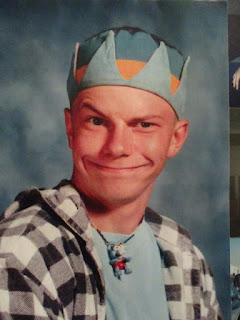 This is the hat. He made it himself years ago (I don't remember how old he was) out of fabrics from my stash. He does know how to use a sewing machine. (this is a photo of a photo) 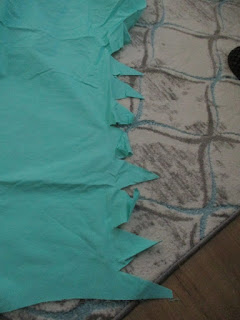 This was found in my stash just before I started working on the hat. 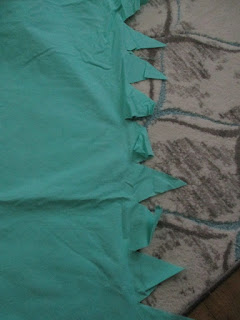 It doesn't show up so well but this is the actual fabric my son used to make his hat. It's a light green. I was amazed when I pulled the fabric out off the shelf in my sewing room. He didn't use a pattern but just cut into the fabric and lo and behold, I still had this! I was so happy to have found this because I used it as a template. He has a big head and I didn't quite know how I was going to make those points and have them turn out to meet evenly but I guess luck was with me. 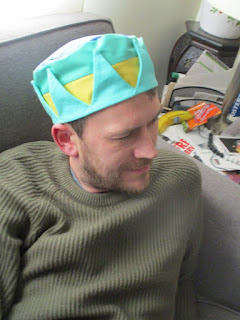 Here's my son-in-law David trying the hat on once I finished it. 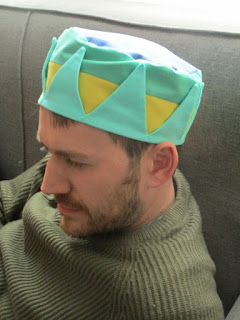 Another angle. It appears as if he has a big head himself. 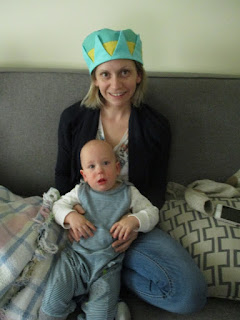 See what I mean? It's a big hat - modelled here by my youngest daughter Ayla with her little son, Atticus. We were so glad that they could all join us for Christmas this year. 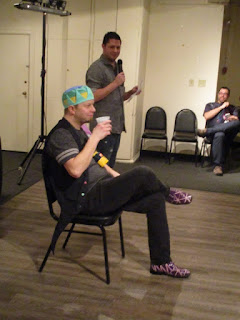 The birthday boy himself wearing his old/new hat, a vest he made himself years ago and the shoes he wore to his wedding over 12 years ago. His brother Eric was host to his roast and one of his old scouting friends, Matt is waiting his turn to say a few words. 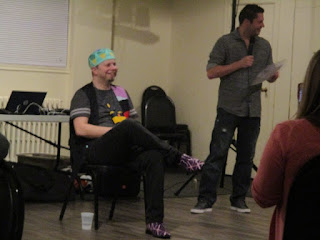 Here's another photo of the vest. The two sides are very different and vary in length. He's also wearing toy binoculars from years past. (apologies for the blurry photo)

All in all, a good time was had by everyone who attended. To celebrate his 40th birthday, Mark went to Yellowknife for 5 days. Yes, it is winter and yes, it was cold but then again, he went to Whitehorse for his 30th and got background material for his published novel, Snowman.

I do believe that hat was the last thing I made in 2018. I repaired some very worn out jeans and shorts but we won't go there. I still have some skirts to hem and other garment sewing to do but I am also working on a few quilts.