Just sewing (and knitting) along...

Once again, I have completed another part of a BOM (block of the month) but this time I skipped one month. 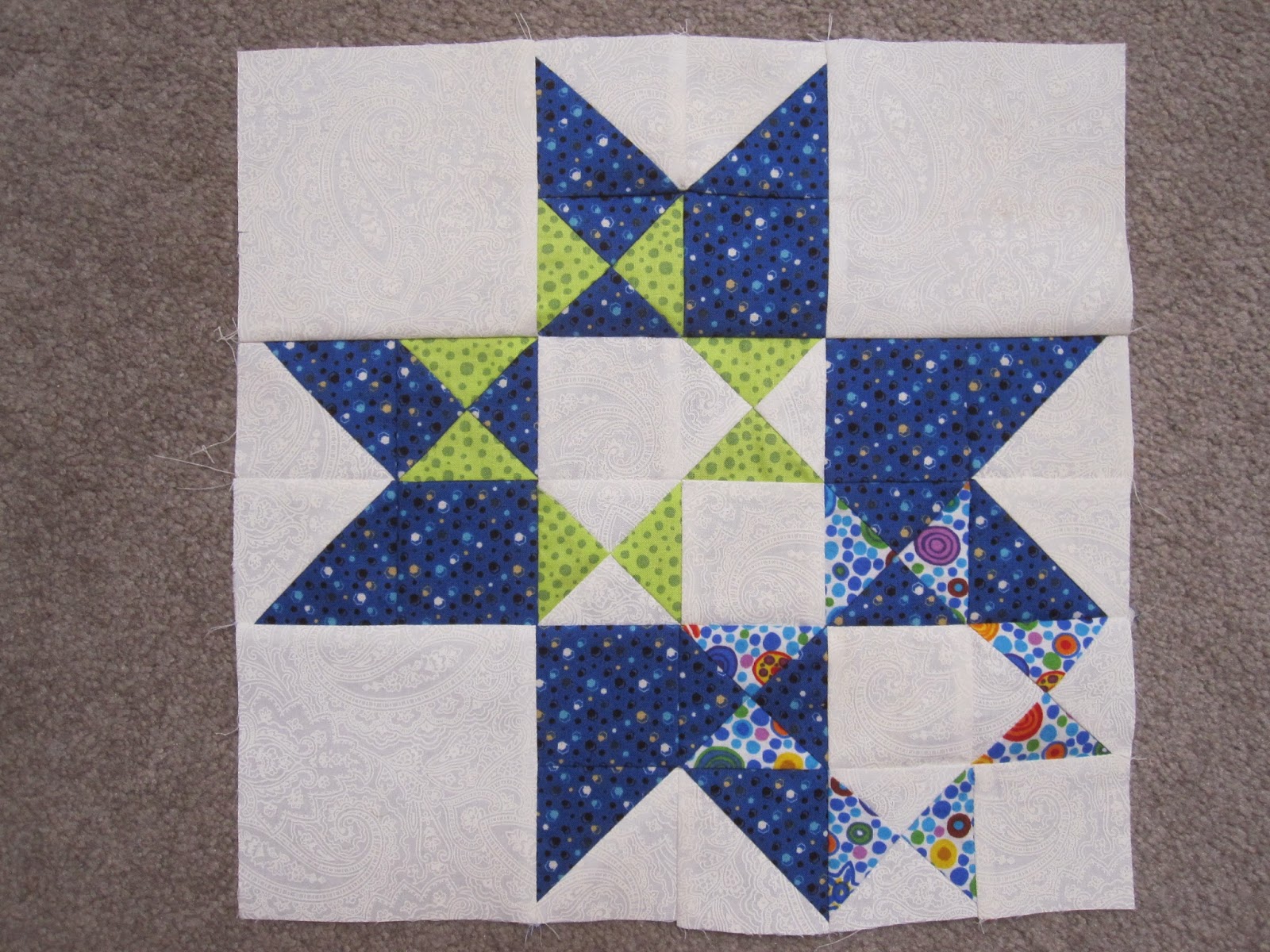 This is called Cathy's Star (at Quilters' Cache) and it's January's installment of Cathy's Carousel BOM. This BOM began in October and the patterns are still available if anyone wants to join in.
I have not yet done the December paper pieced compass and since I don't want to make a mistake, I will work on it slowly. I have the colours of the fabrics chosen so I just have to sew it. 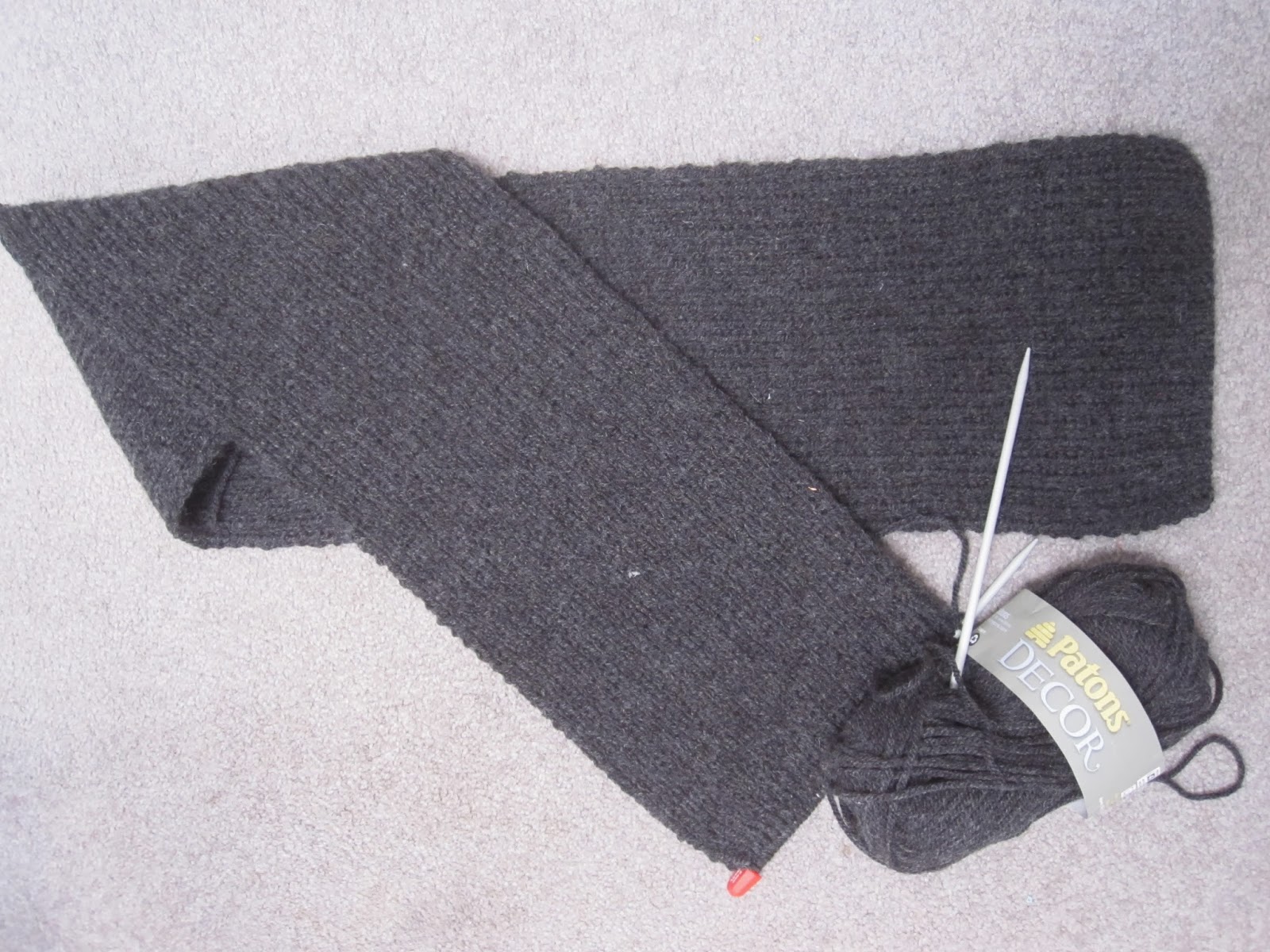 I am almost done the second cowl too. 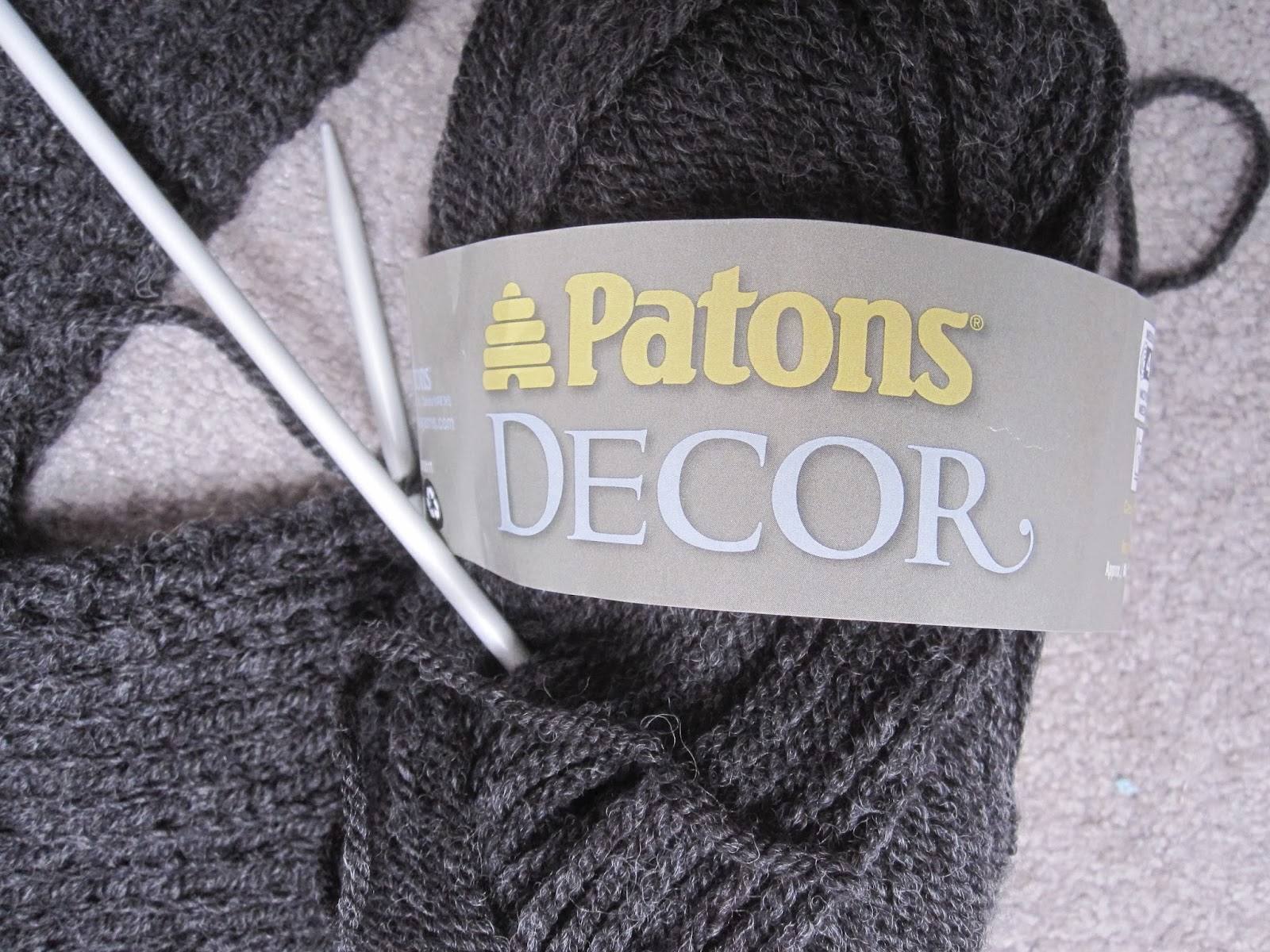 This time I used Patons Decor. Another nice, soft yarn - great for around the neck. 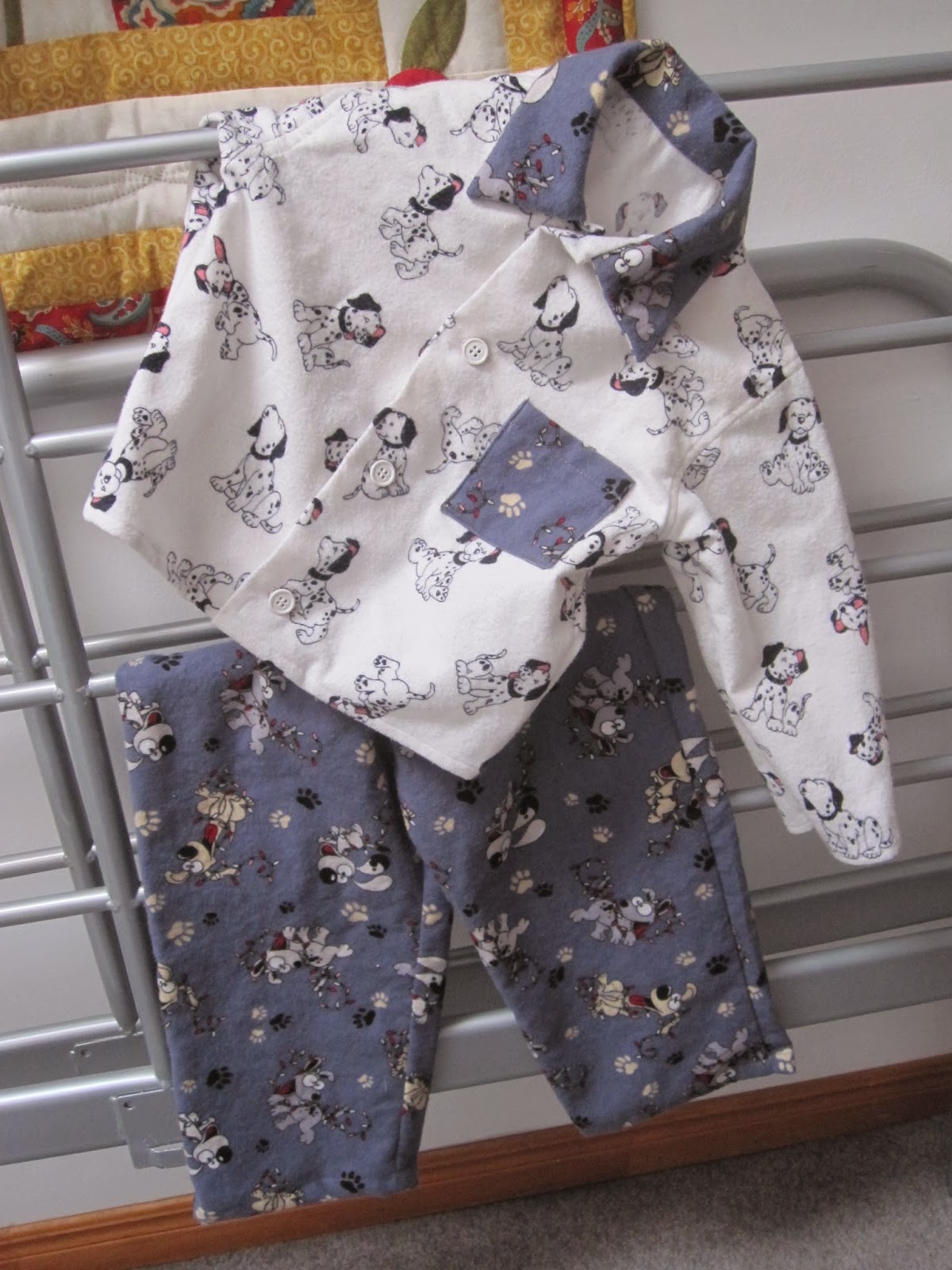 Another pair of pajamas got made too. They are for Luc again. Doggy fabric remnant at Fabricland for $1.60. I'm glad I picked it up because... 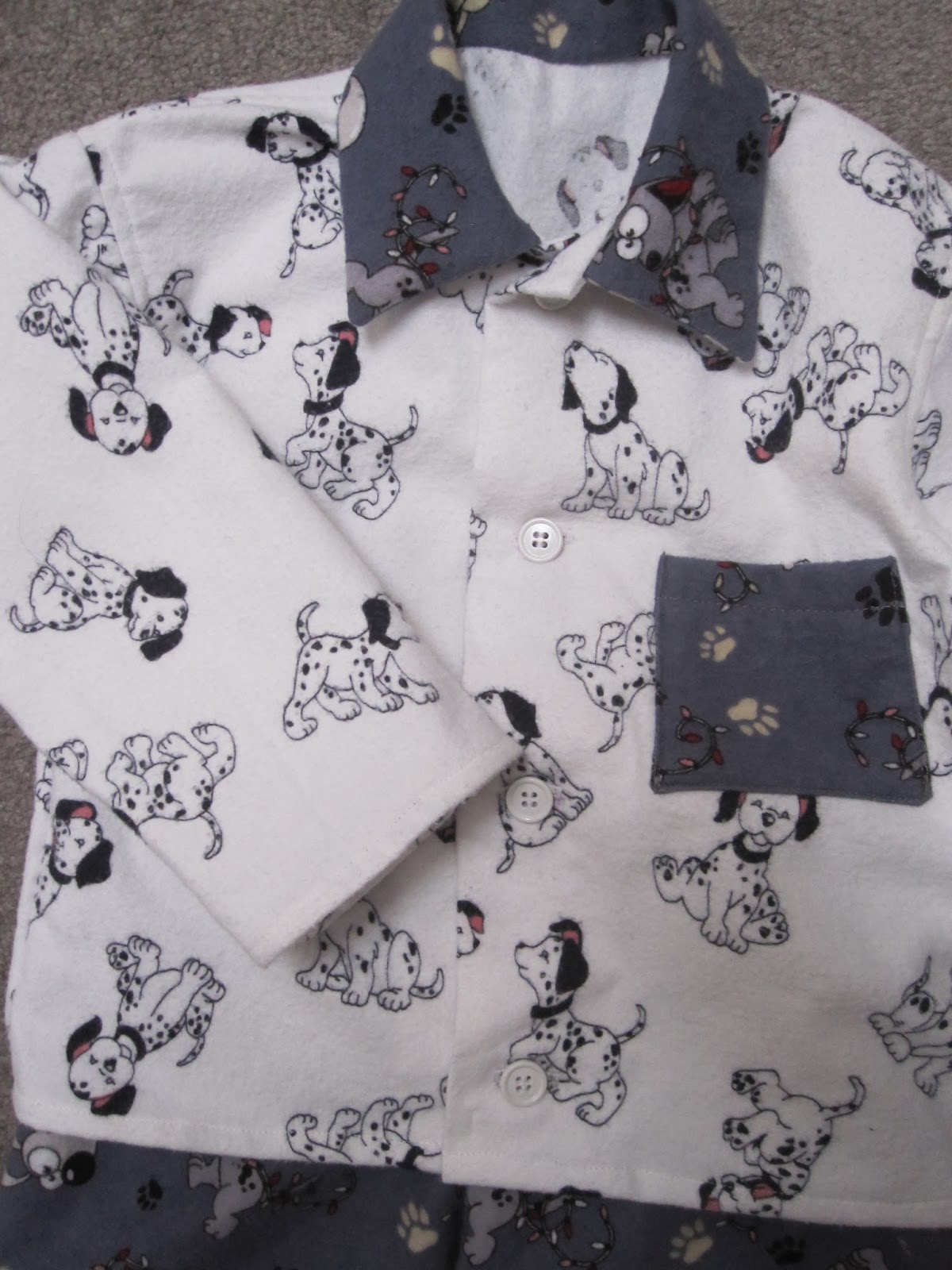 I didn't have enough of the Dalmatian flannel to make the pants too. I suppose I could do shorts but I won't. 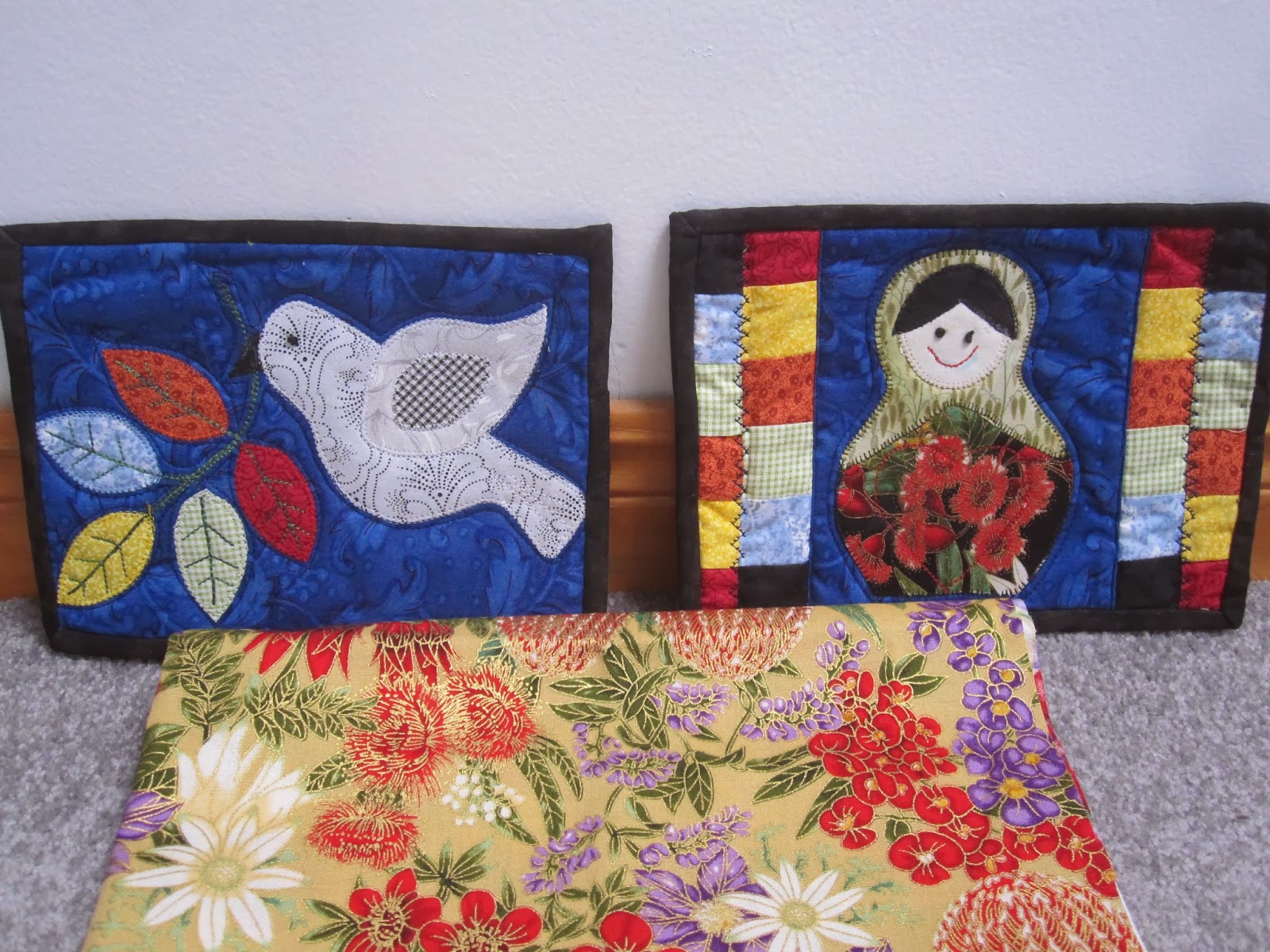 This came in the mail. It's from my Quilting Gallery Sochi Mug Rug swap partner in Australia. Christine lives in Australia but she is a New Zealander. The fabric is a gorgeous piece depicting the flowers of Australia. Thank you very much Christine. I will show you all what I sent to Christine once she receives it.

I'm going to link up with the Needle and Thread Network and with Esther's blog.
Posted by Dolores 20 comments:

Another BOM (block of the month) 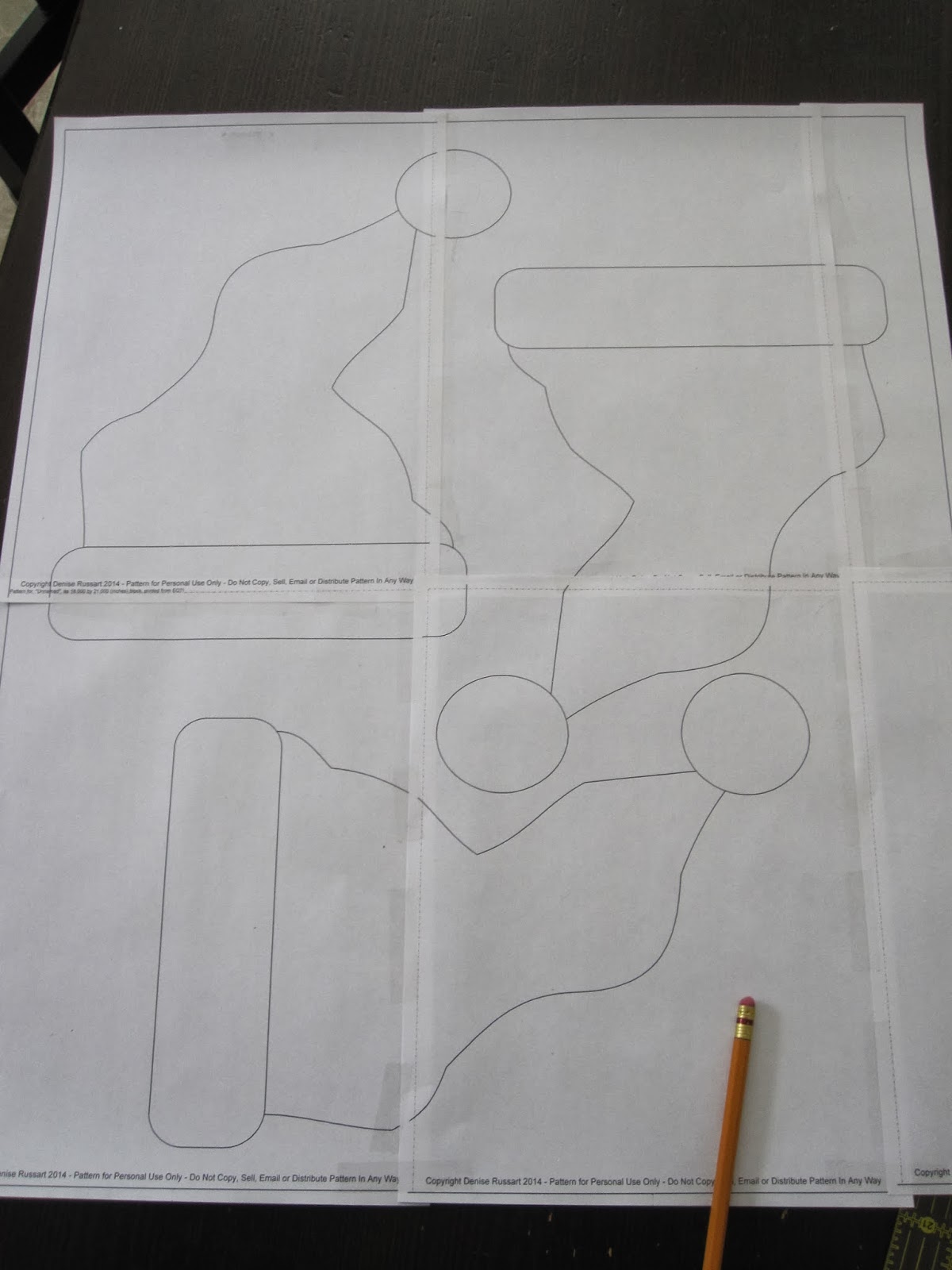 I downloaded the pattern, taped it together and cut the backing fabric (slightly larger.) 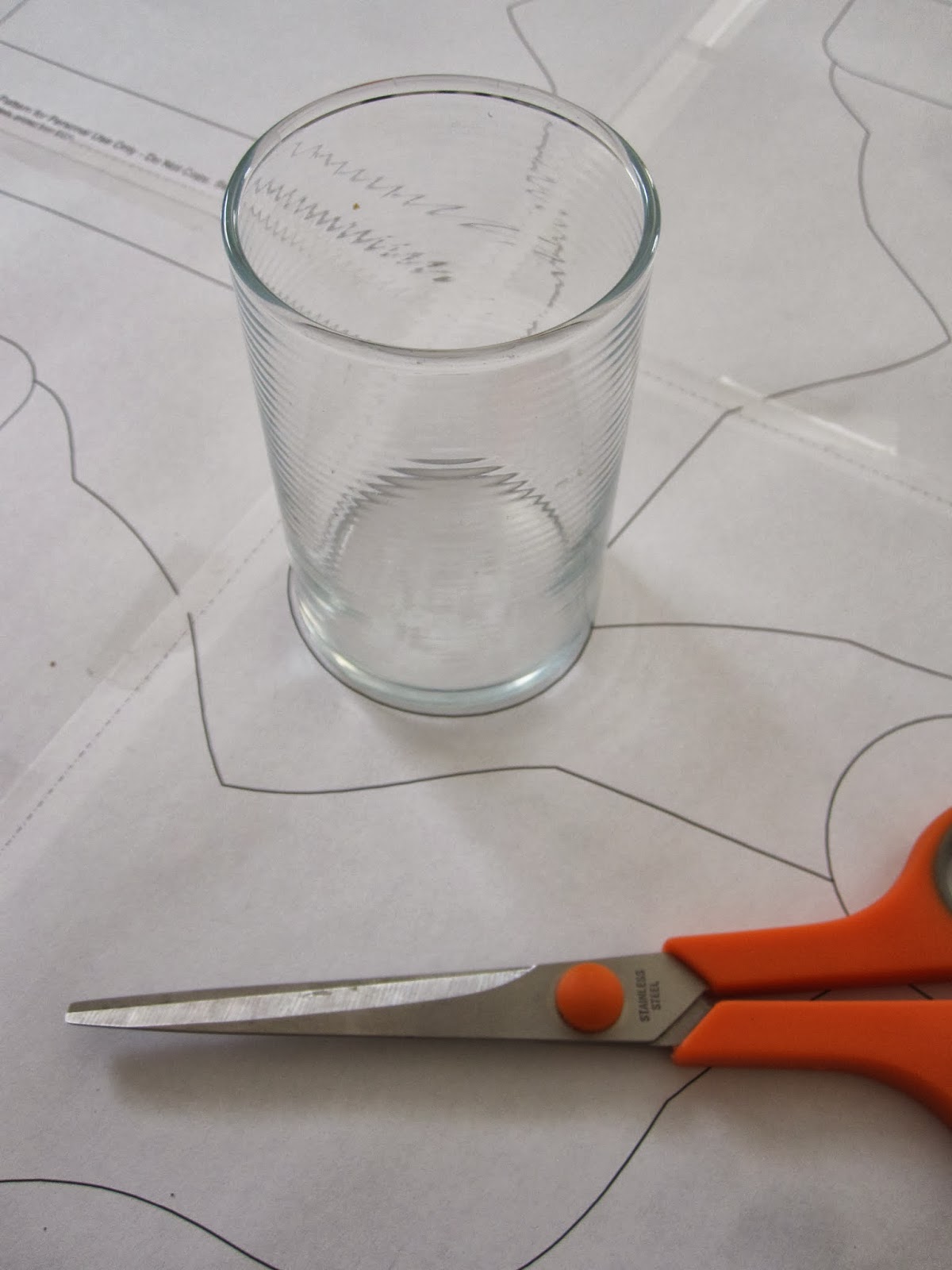 I got lucky and found a small glass that is the same size as the pom pom on the hat so I don't have to make a template for it. 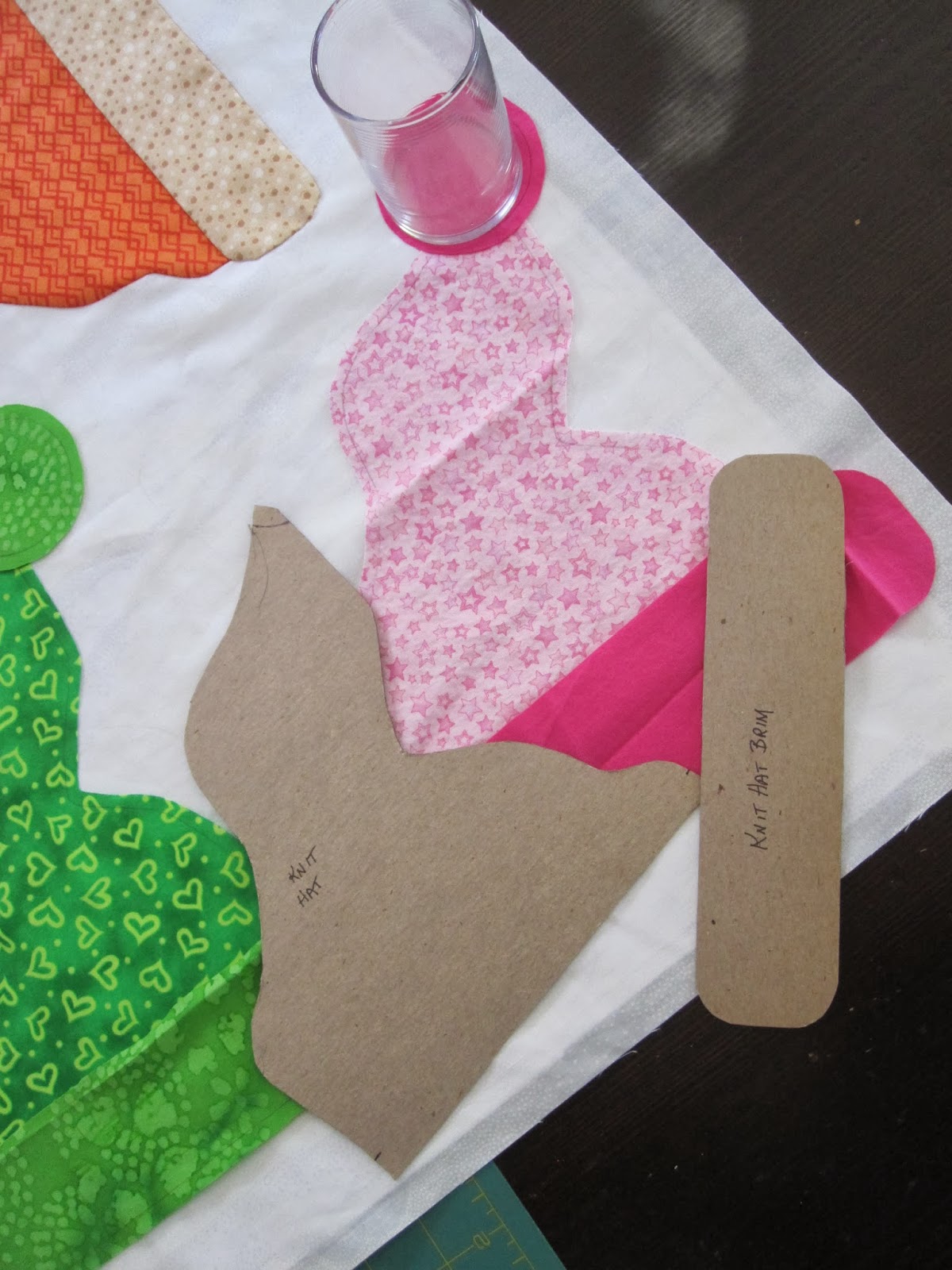 I am very 'old school' when it comes to applique and since the hats are almost all the same - and one is reversed, I only needed one hat template and one brim template. These are just made of some cardboard that I had  put aside for templates. I have template plastic too but cardboard is a bit thicker and I seem to prefer it. I often use cereal boxes. 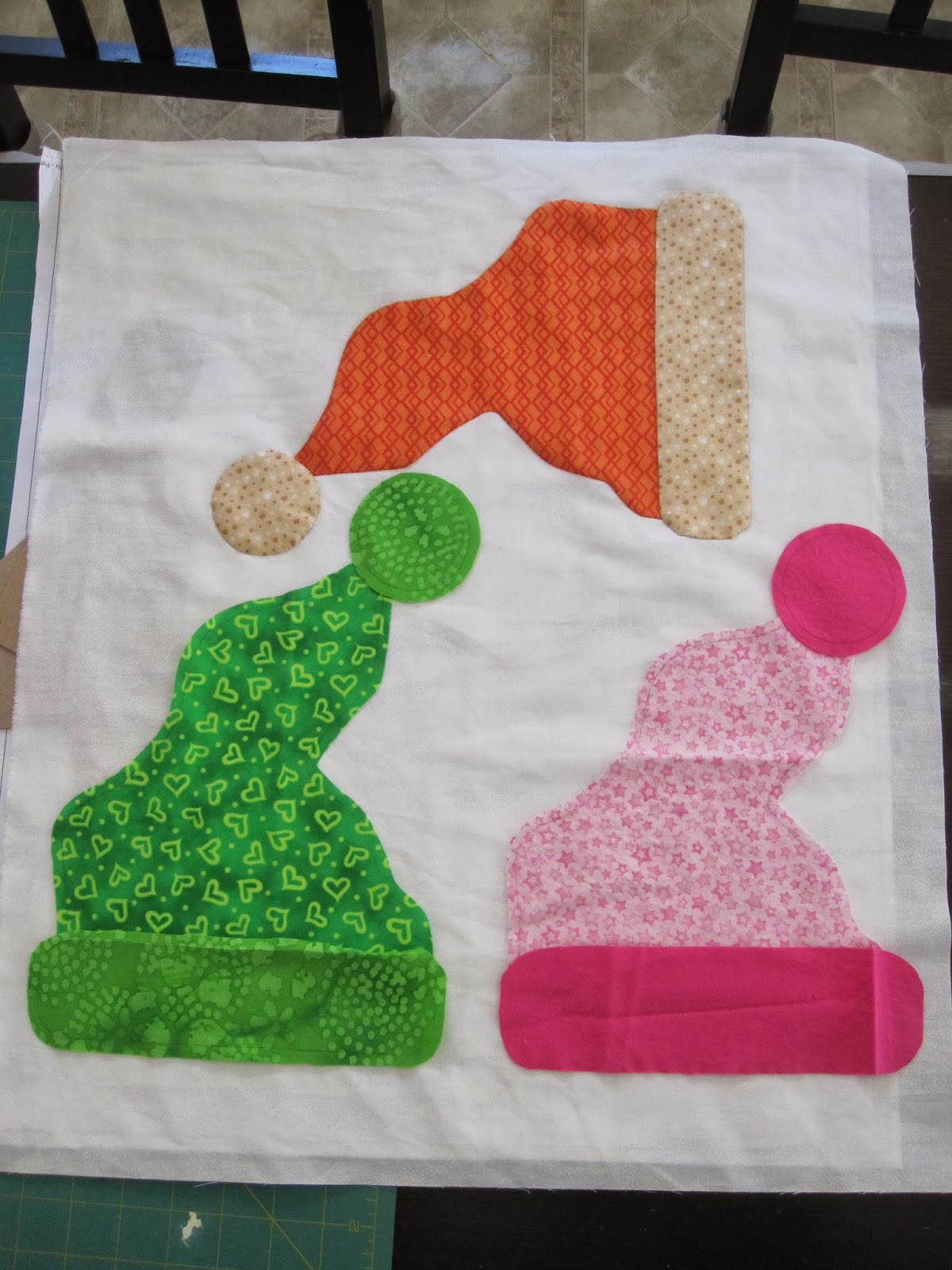 I will iron the pieces before I applique them. The orange hat is complete. I do like this BOM. This block is 18" by 21" finished. There are to be two of these blocks. It's fun looking for suitable hat fabric from my stash.

This block of the month is called From Head to Toe - A Knitter's Gifts and the pattern is by Denise Russart. It just started on Feb. 15th but once a new block is posted, the previous block will no longer be available for free.

Speaking of free patterns, there is also a cute sew along put out by the Red Boot Quilt Company called Baby It's Cold Outside and I had mentioned it a couple of posts back. Well, all the patterns are now available but only until the Olympic closing ceremonies. So if you want to make it, download the pattern now.
Posted by Dolores 13 comments:

Update on BOM (block of the month)

This year it seems like there are a lot of different (and nice) blocks of the month. One of the ones that I have decided to take part in is by Quilt Doodle Designs.
The first installment was a row of snowmen and I actually thought that the whole quilt was going to be done in rows. I was wrong and so here's the next part. 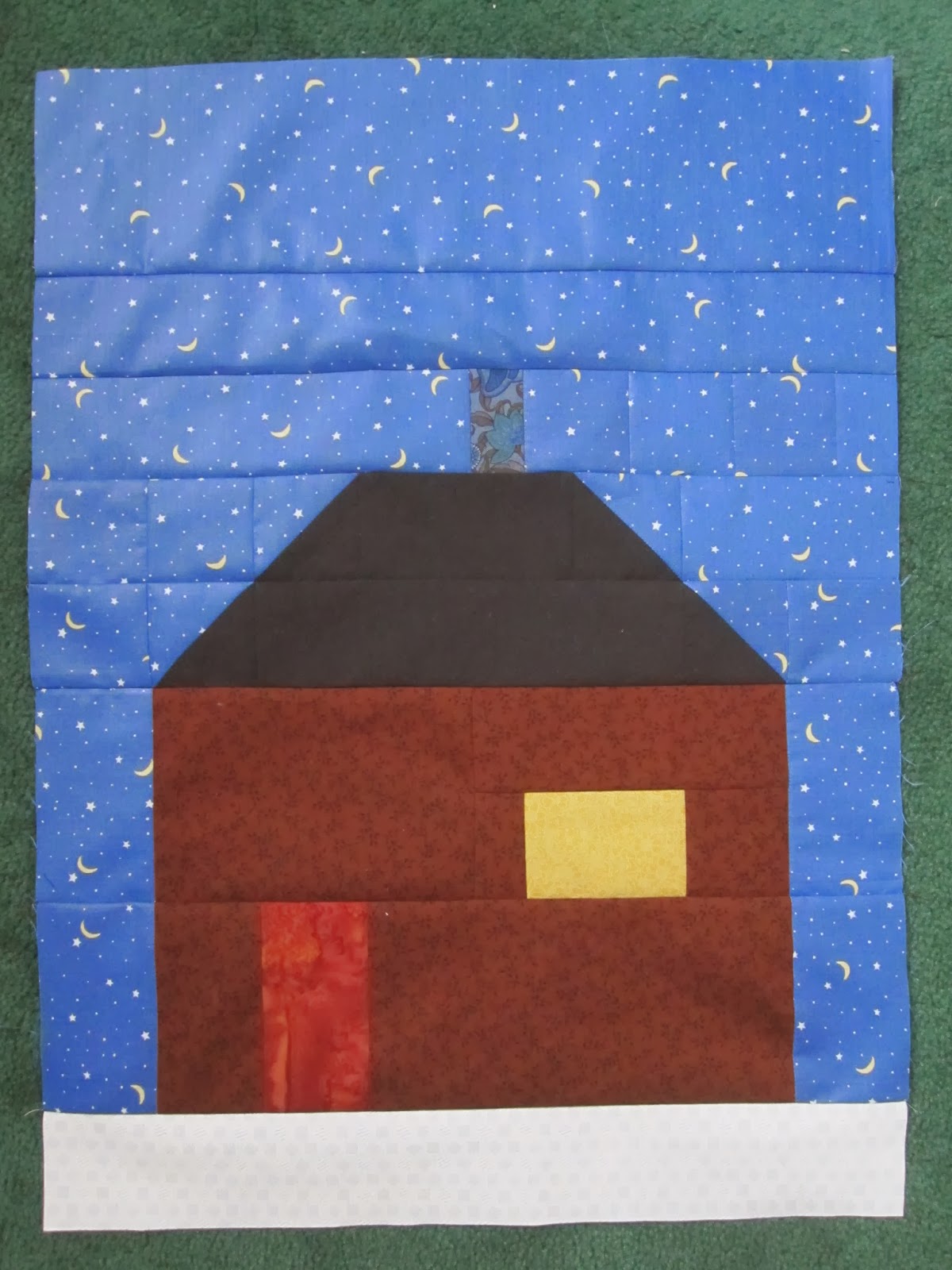 The cozy cabin block is 16.5 inches by 22.5 inches. A fairly big block. I was glad to be able to use the same blue for the sky as I had for the snowmen and now I have very little left. It's always nice when fabric gets used up. The stash is so big and I am trying really hard to just use up what I have.This block really does look kind of bare and empty. I think it needs something...


I will post more sewing related stuff as I get it done.
Linking up this week with The Needle and Thread Network and with What a Hoot! Pop on over to see what others are working on this week.
Posted by Dolores 17 comments:

Happy Family Day! It's a holiday over here and we celebrated yesterday when everyone came over to watch the Olympic hockey game.

Here's a free pattern from The Red Boot Quilt Company in Australia but only as long as the Olympics are on.

Please note: If you are printing in North America, this will fit a legal sized paper. Otherwise, A5 will do. Printing on 8.5" X 11" may cause you some headaches and the feeling that you are missing something.


Check out their other patterns that are equally as cute.
Posted by Dolores 8 comments:

I haven't posted in a while about the quilt that the Champagne Quilters are working on so here are a few photos of the quilt on the frame. I had to stand up on a chair to get these photo. It's a big quilt and we are making it to give to Marg's church to raffle off. 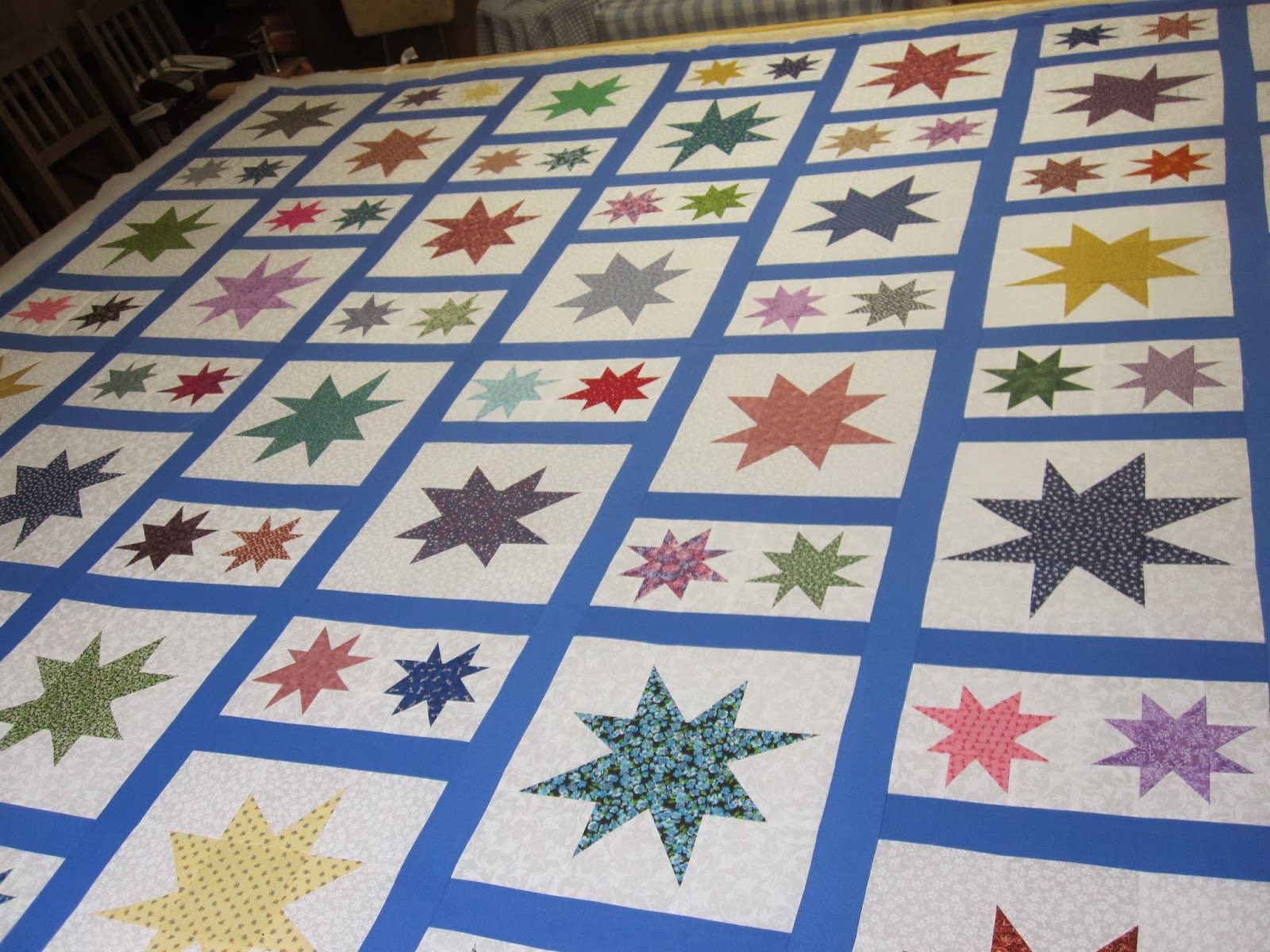 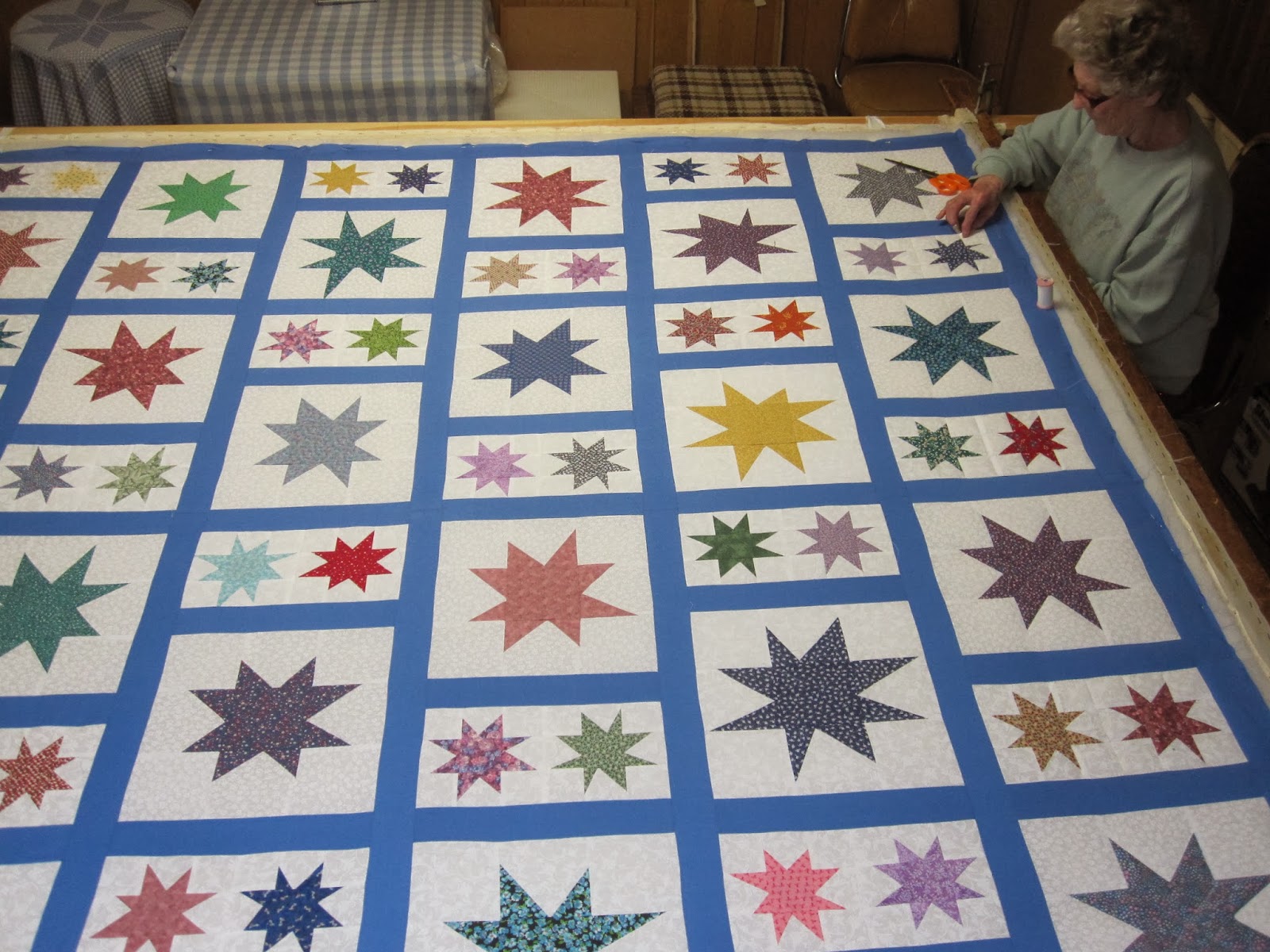 Here's Marg diligently working away at her end. She's just about to finish up the first row. 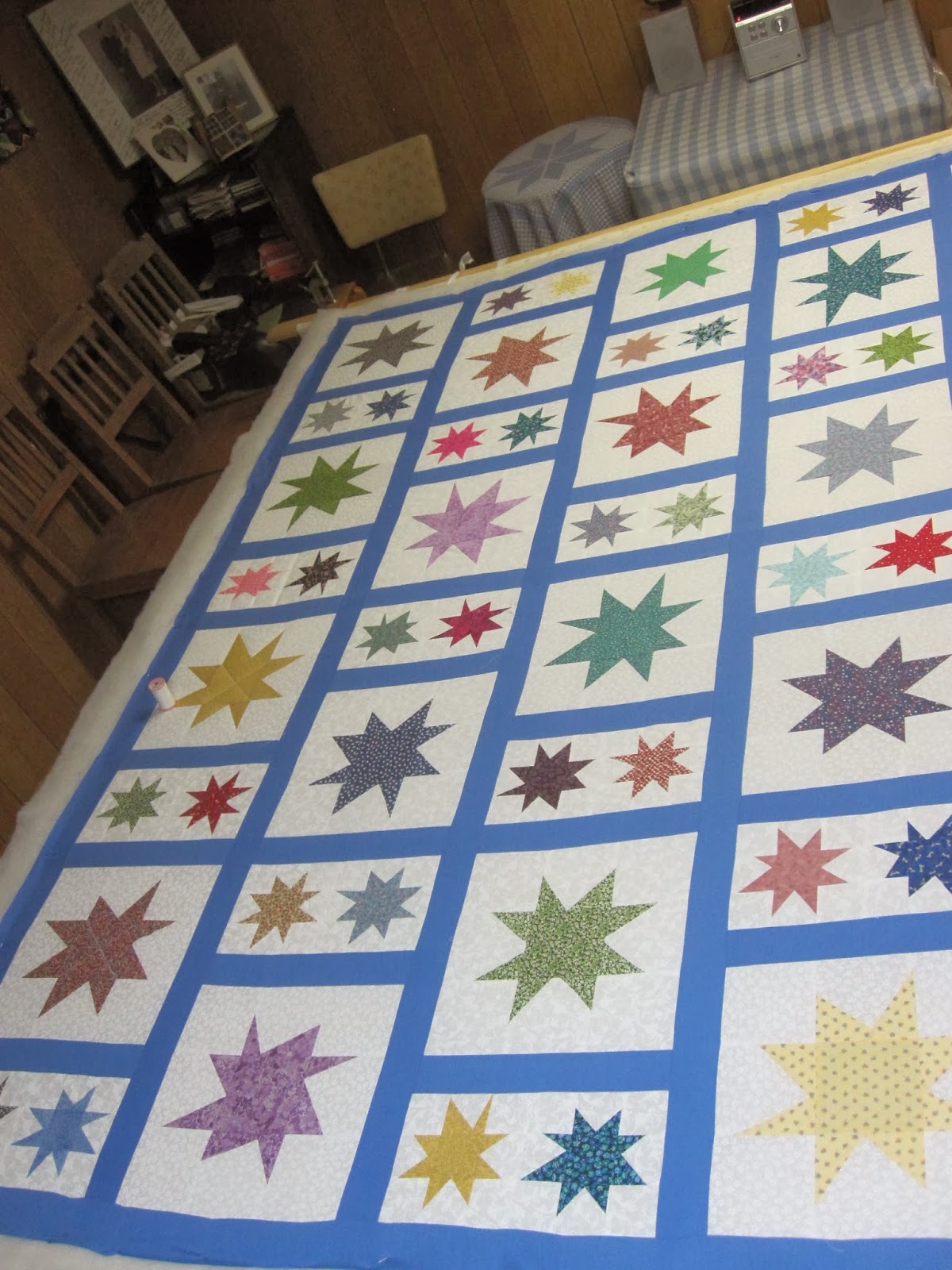 It's a colourful quilt and that particular shade of blue is just perfect. 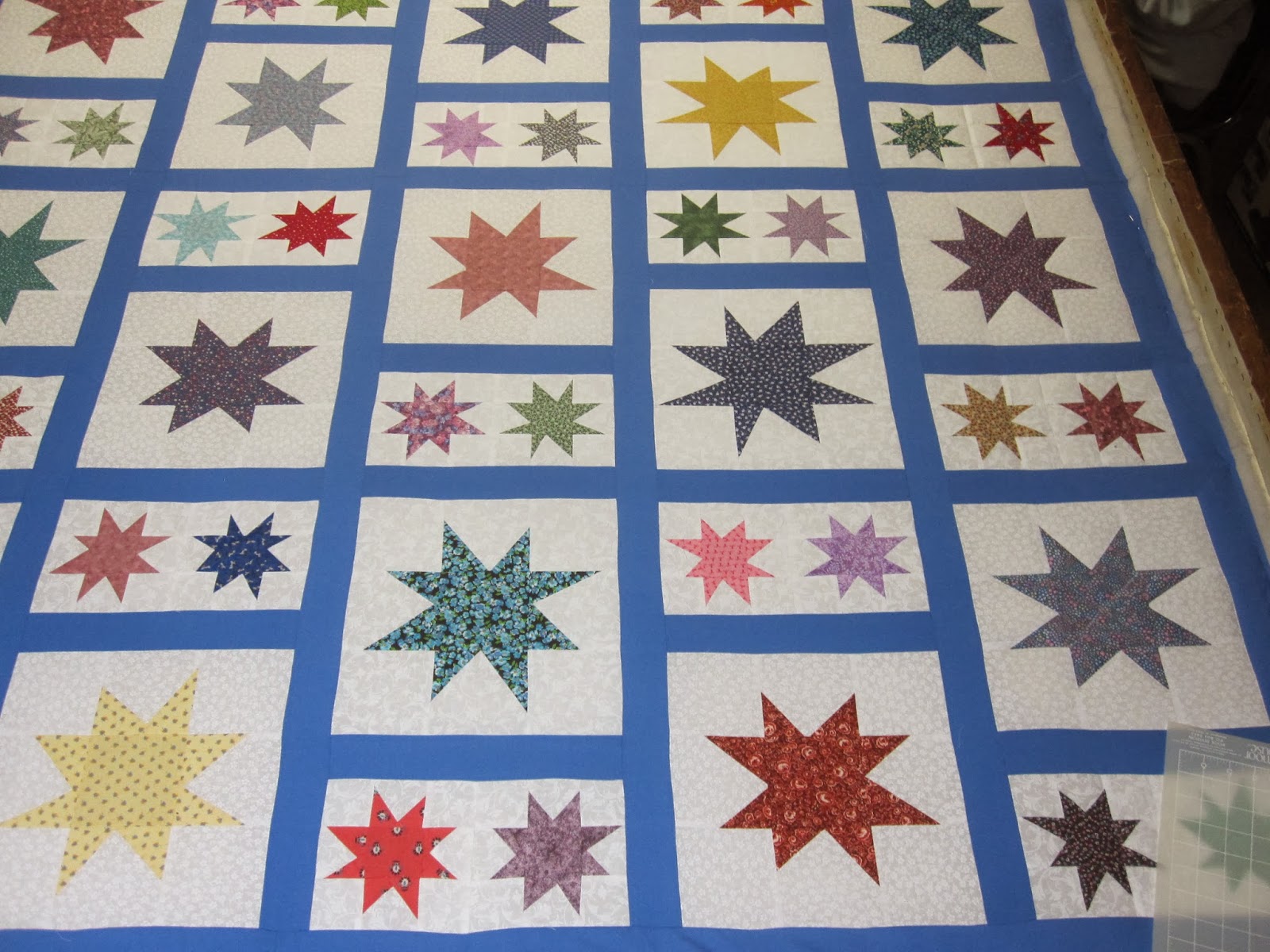 There are only a couple of stars where the fabrics are repeated. 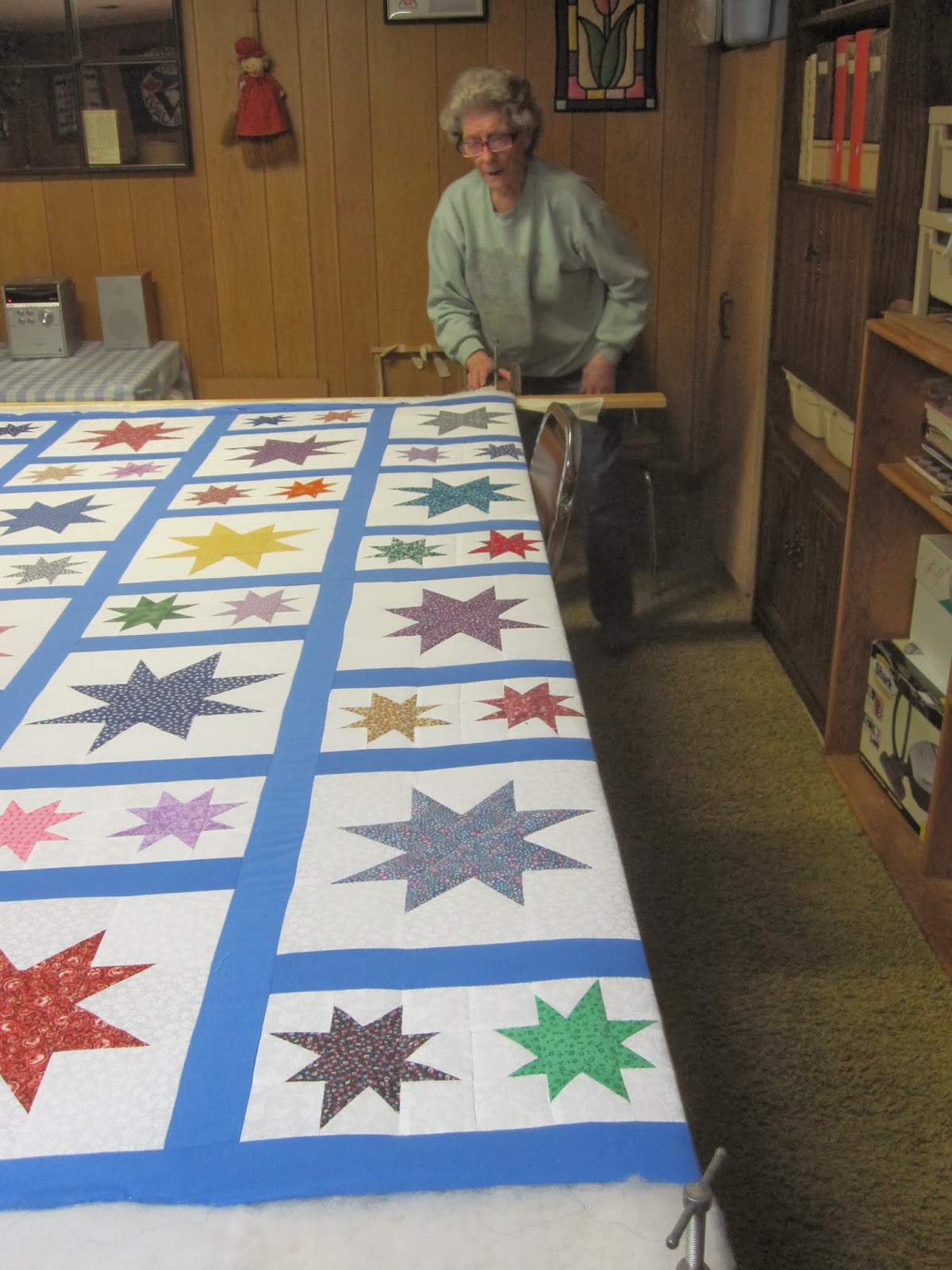 Marg's end got in a couple of turns by the end of the evening.
Posted by Dolores 12 comments: 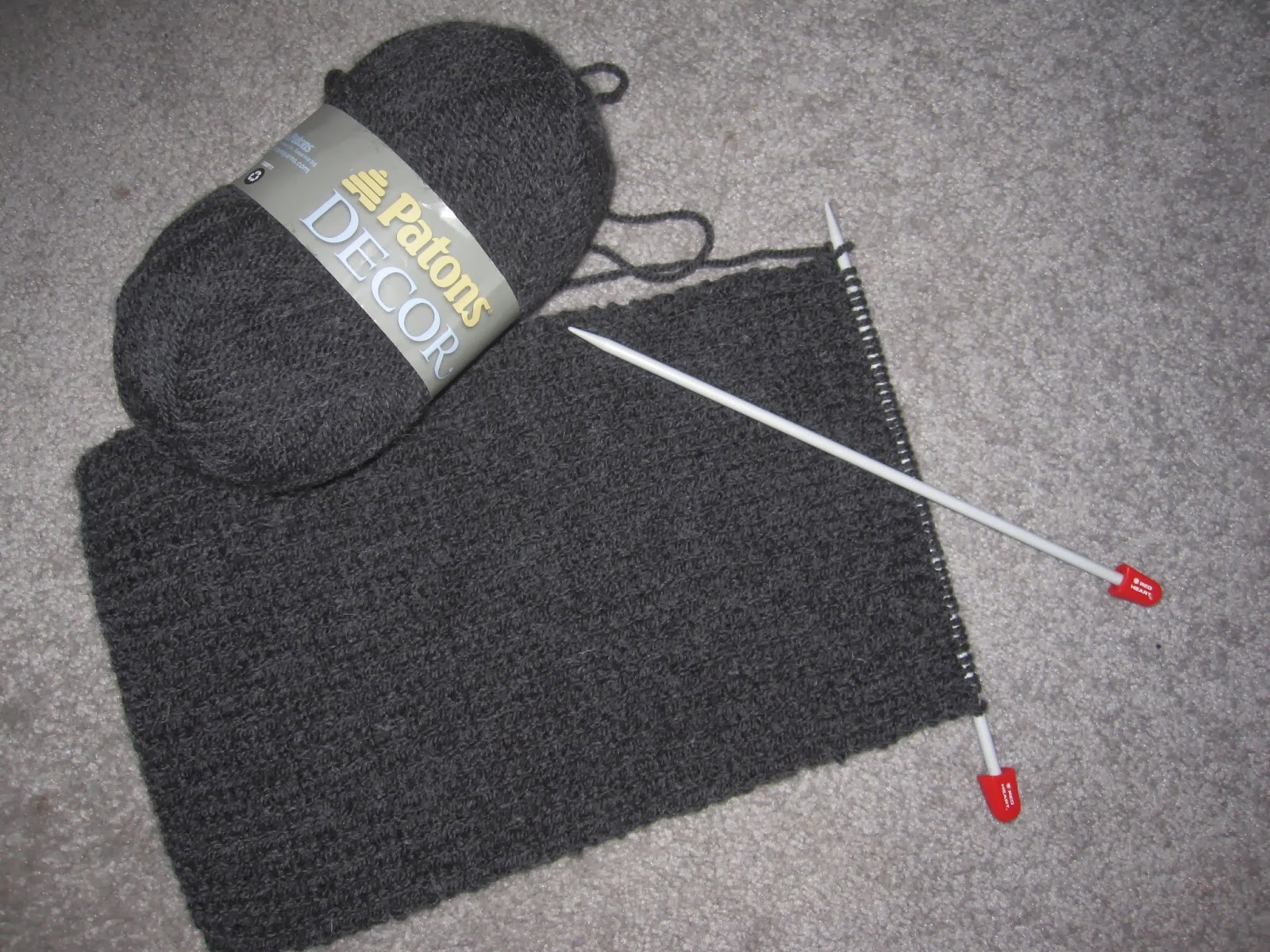 The beginning of another cowl. Gray again but darker this time. 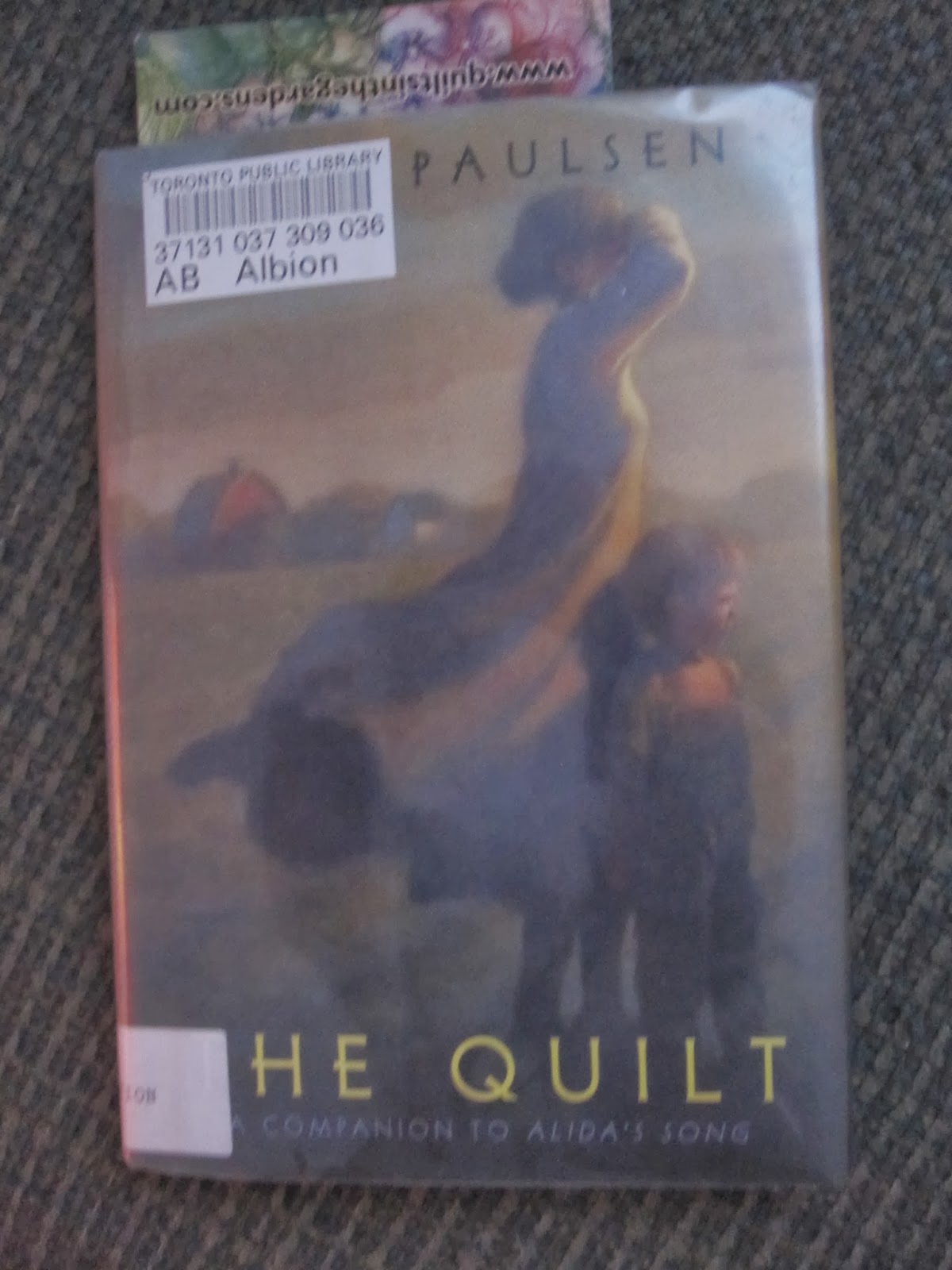 This is what I am reading. It's small and it's been on my list for a while now. 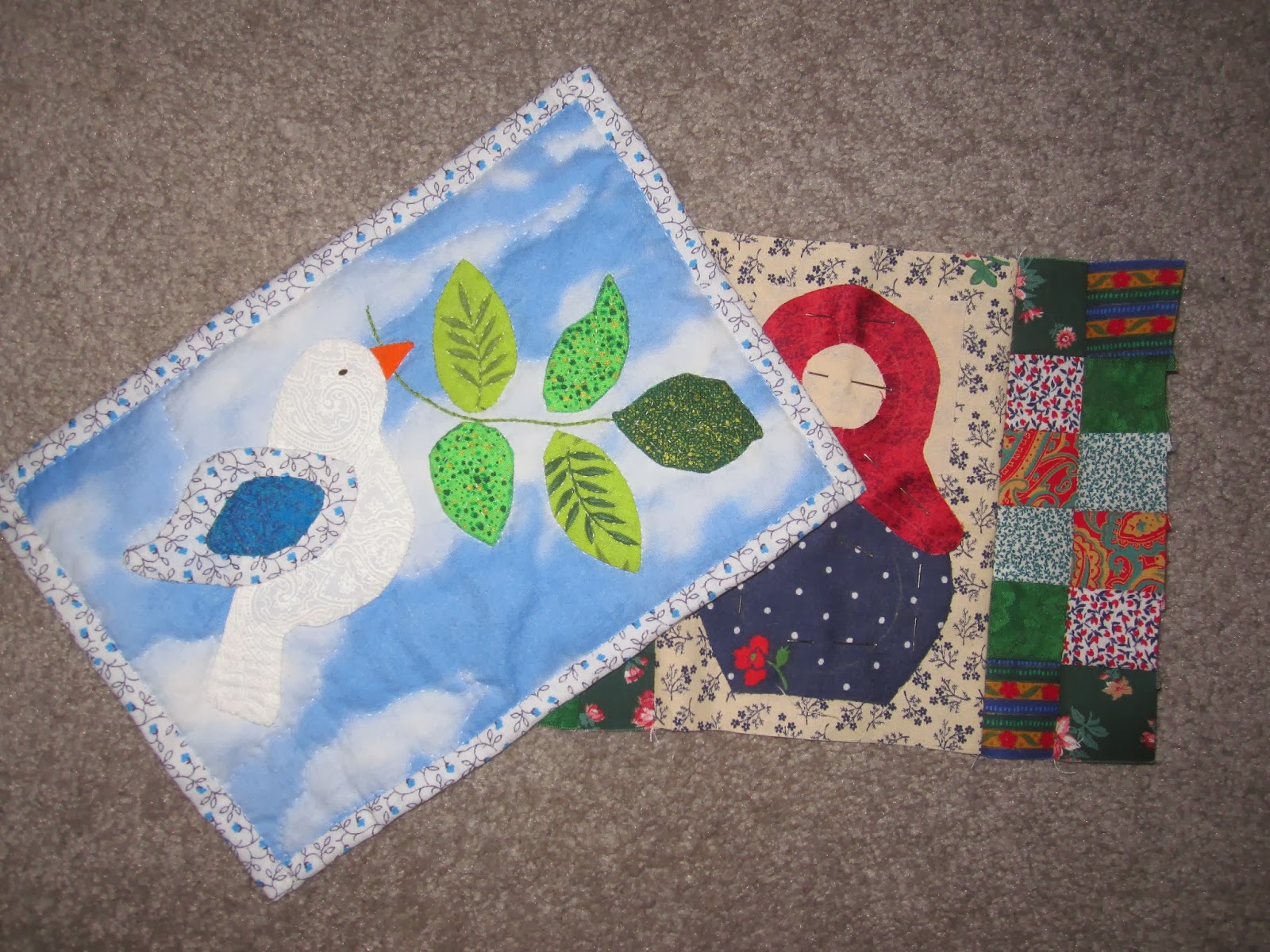 One mug rug finished and one more to complete. These are part of the Quilting Gallery's Mug Rug Swap celebrating the Olympics in Sochi. The patterns come with the sign-up and everyone makes these two patterns. I am hoping to finish both of them this week and send them off to my partner. They will both need labels.

I'm linking up with the Needle and Thread Network and with Esther's WIP blog.
Posted by Dolores 8 comments: 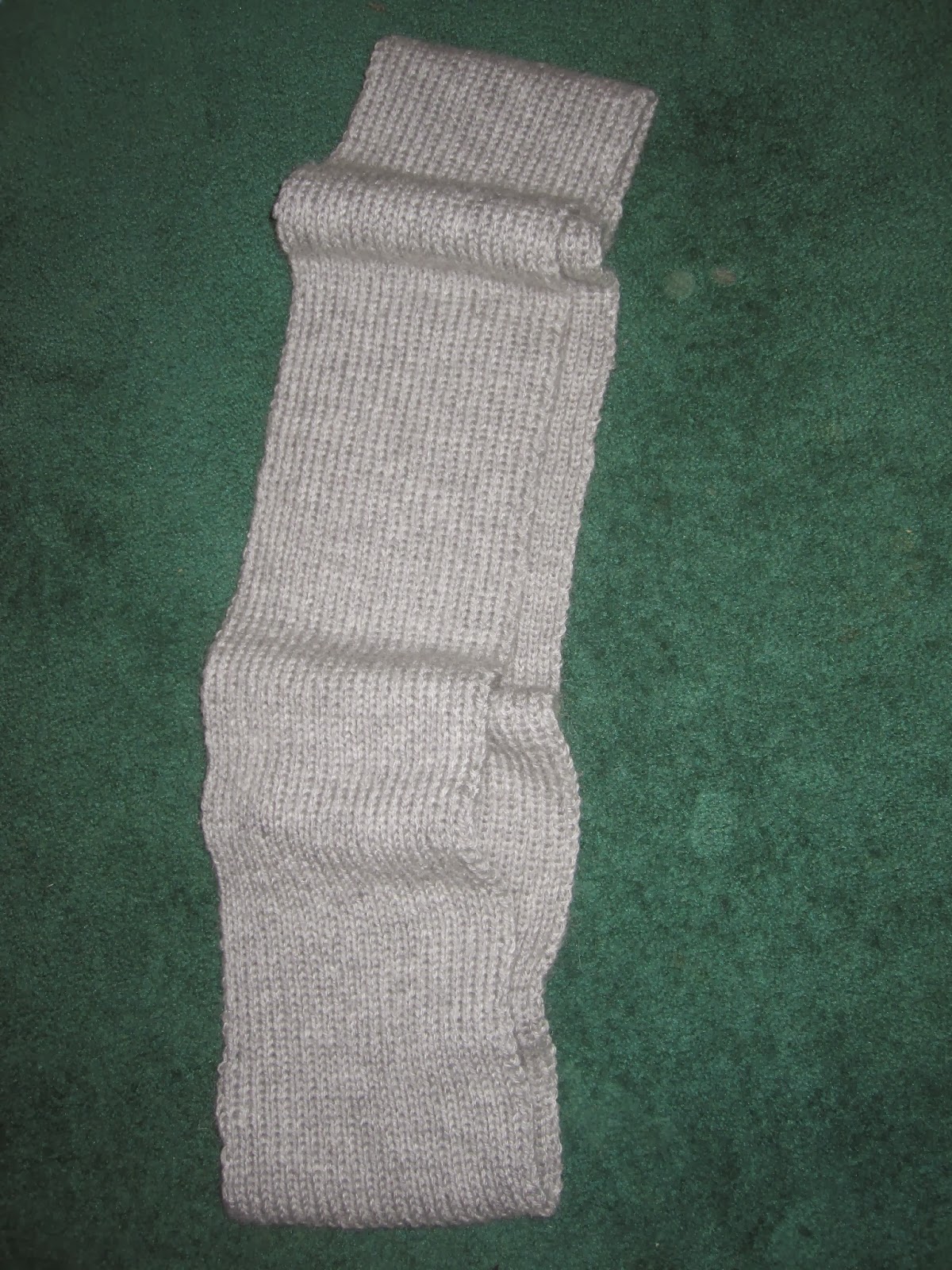 This is for my daughter-in-law, Kate. It's 70.5 inches long. The next one will be in a darker gray and slightly different yarn. 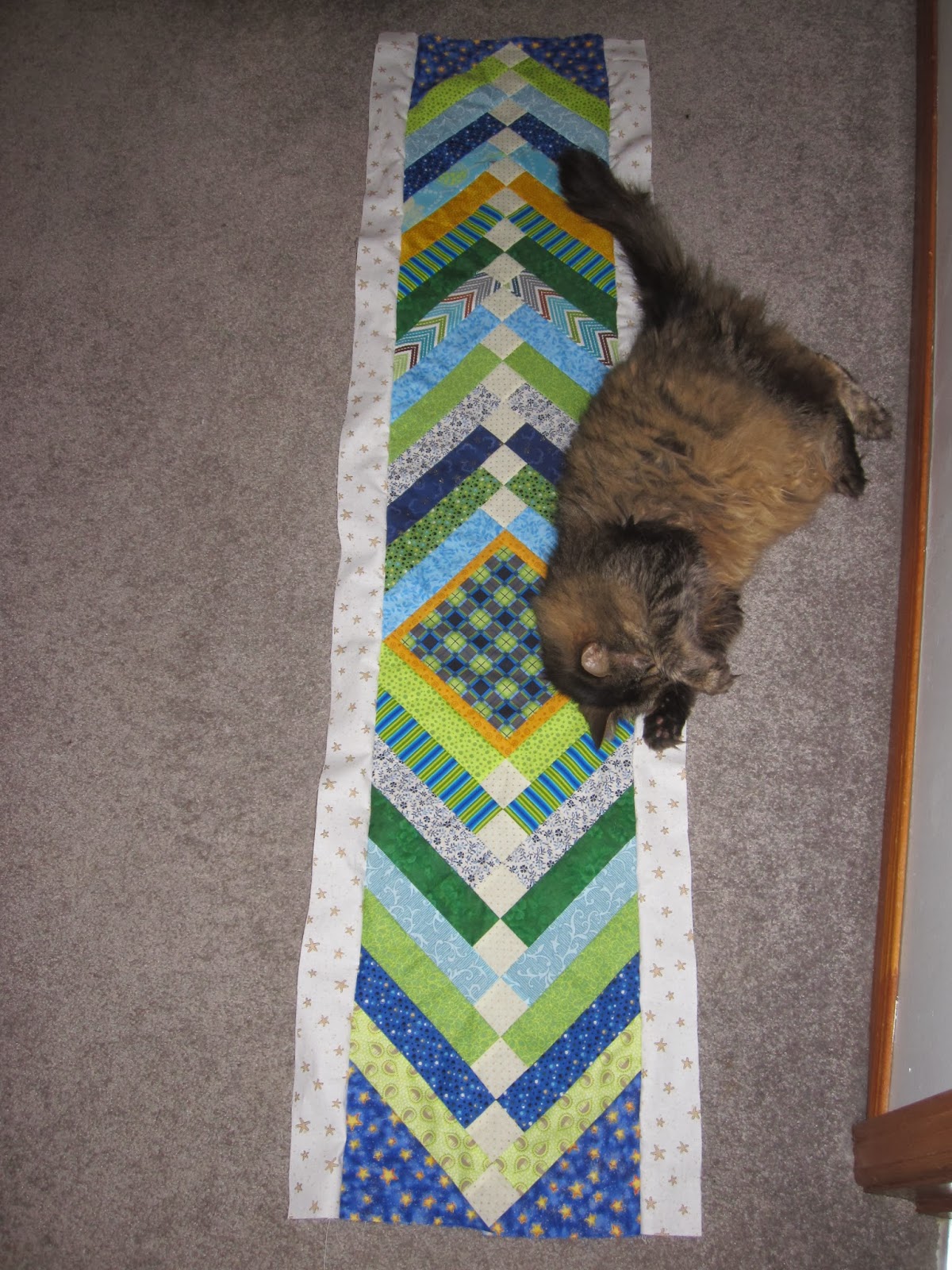 For those of you with cats, you can relate. I tried to take a photo without little Pixel but she insisted on assisting. This is the braid for the block of the month called Cathy's Carousel hosted by Pam at Mad About Patchwork. I had finished the braid before but I finally decided what fabric to border it with. 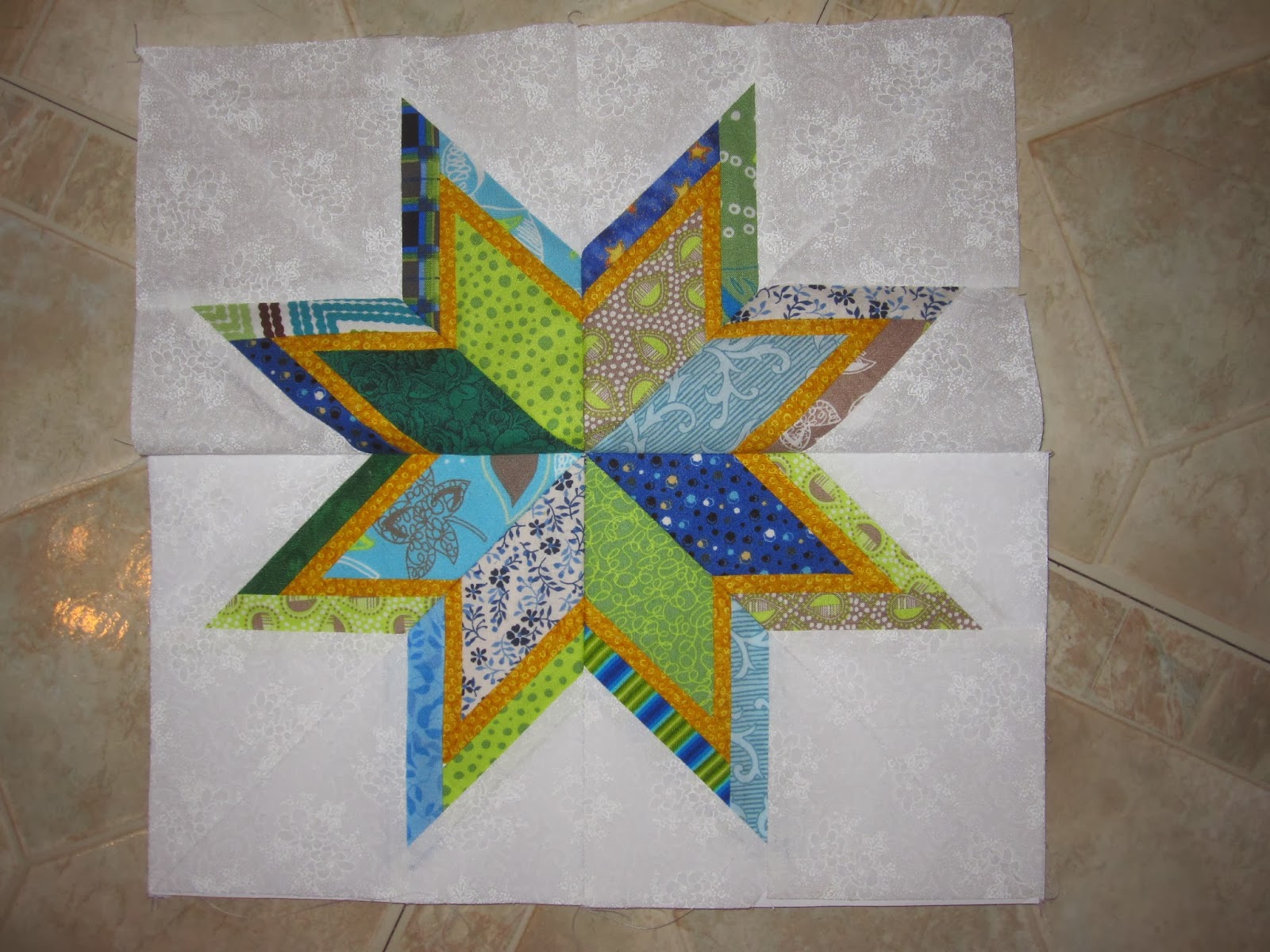 This is the second installment of the BOM. As you can see, half of it still has the paper attached to the back. It's the first paper pieced block. The next one is much bigger.

I'm linking up with What a Hoot Quilts. Pop on over to see how other people are getting along with their blocks of the month.
Posted by Dolores 17 comments: 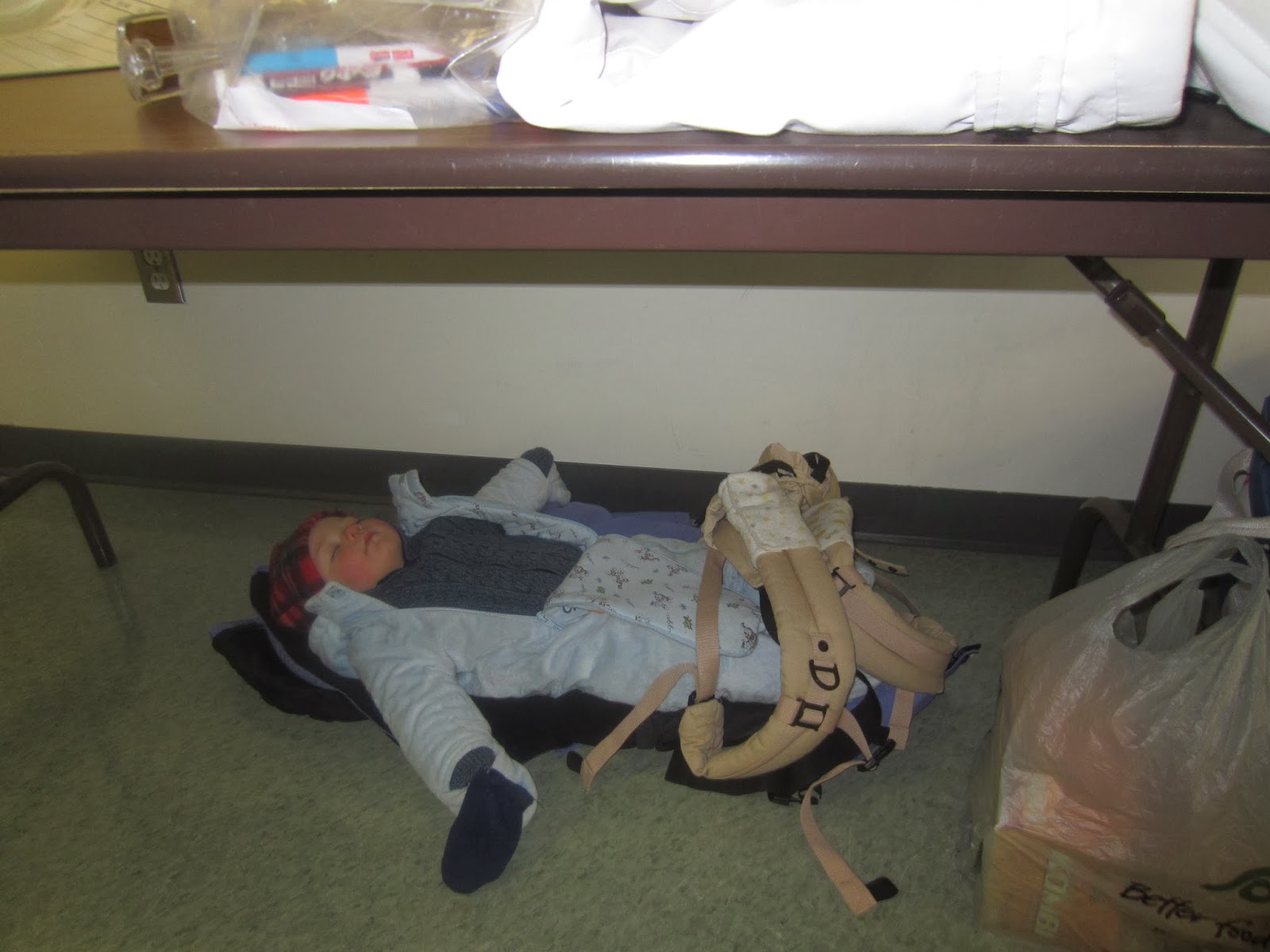 Poor little Patric. He and his mom, brother, uncle and aunt went to watch the cousins ski. It must have been all that fresh air that got him so tired. 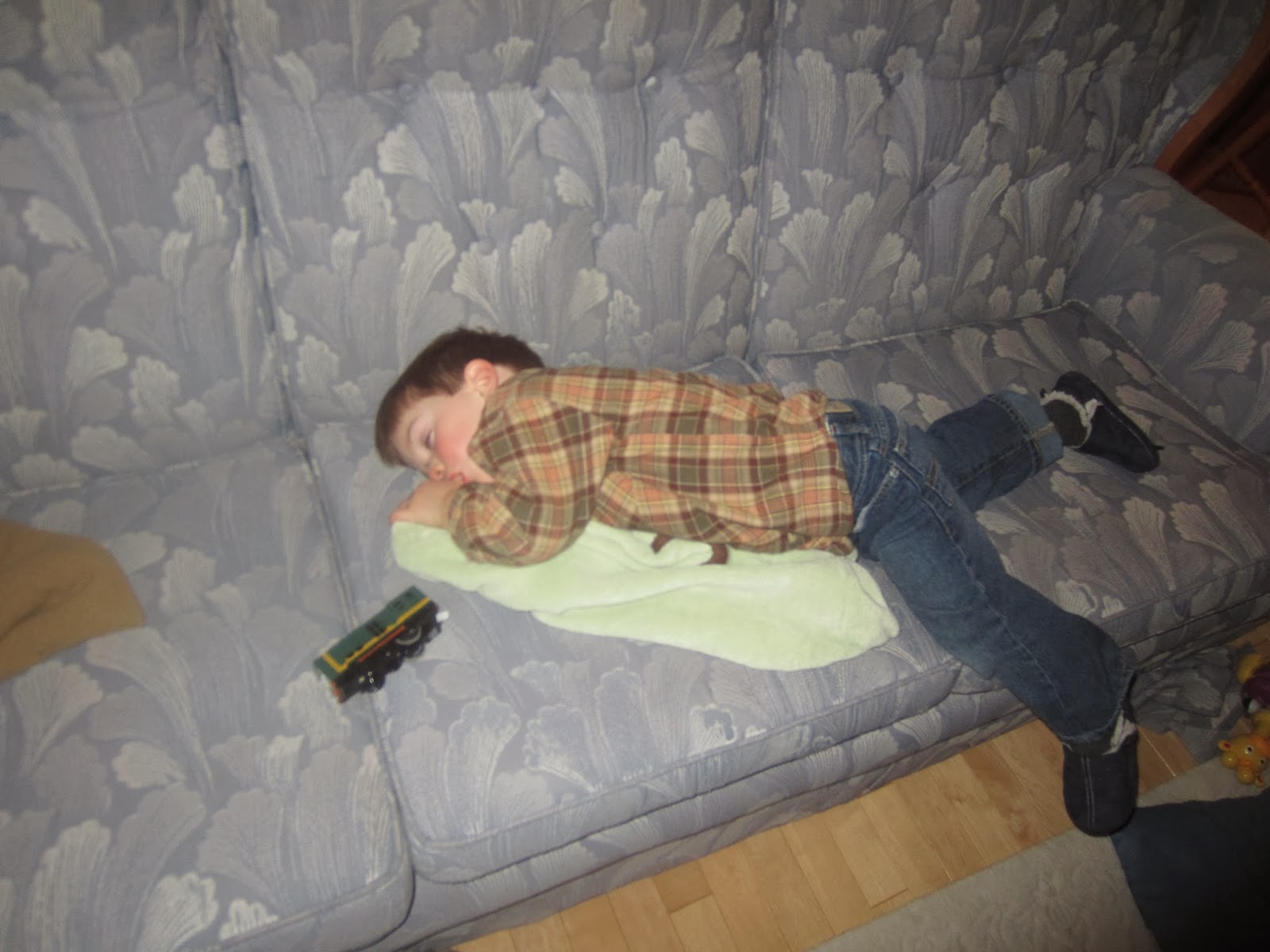 Playing with new toys sure can get tiring too. Luc is taking a nap at grand pere and grand mere's house. Looks like grand pere got plum tuckered out having little ones visit. I guess little Patric has to find another person to play with.
Posted by Dolores 12 comments: