This time it's for me. 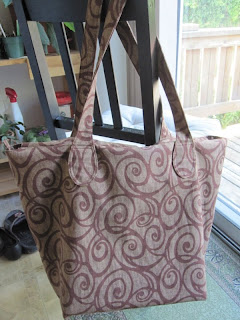 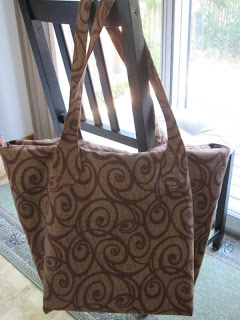 A tote with loads of room and an extra pocket. It took longer than expected because for some reason I have problems putting in the part that is the zipper and facing. Took it out twice and was about to take it all apart when I figured out how to do it successfully. Upside down zippers don't work so well.
Posted by Dolores 10 comments:

These are some of the rejects. I did not remember to take photos of all of them while we auditioned fabrics. 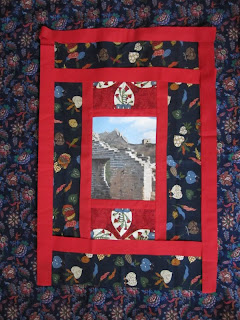 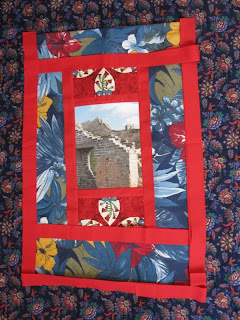 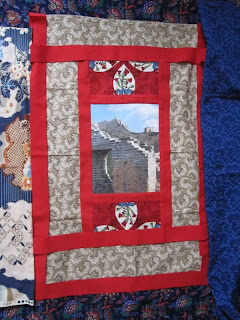 Hmmm. At first we thought OK, but then again, we decided to keep looking.
My place now looks like the tornado touched down here with all the fabric laying about but we only had the earthquake. 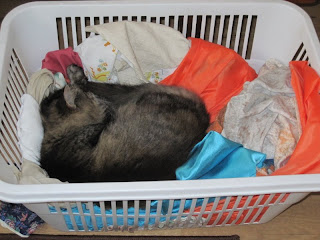 Never experienced one before and neither has my kitty who was sleeping peacefully here in the laundry basket where there were some fabrics that I just washed. She jumped up quickly when we felt the tremors and I thought at first it was the washing machine. We were both surprised. Baxter didn't stir from his nap except to lift his head and I don't know where Digit was.
Posted by Dolores 5 comments:


My eldest daughter Laila took up photography in high school. She has the cameras, the lenses and the other equipment. Over the years I have been the recipient of her talents. At one time she lived in Thompson, Manitoba which is a nine hour drive north of Winnipeg. There were lots of places to hike and fish and skidoo. This first photo is of a petroglyph that she found high up when she was out hiking. She knows I love native art and so one day this arrived in the mail just the way you see it - fully matted and framed. 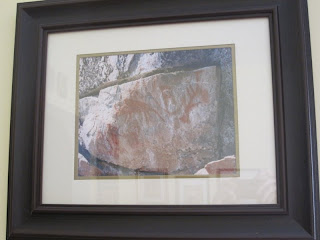 The bad photography on my part shows the reflection off the glass of the other wall of pictures (the female art wall.) 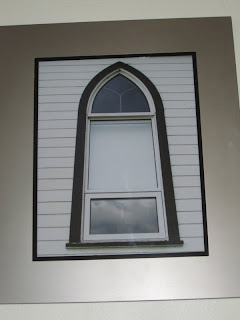 I love architecture - especially windows and doors. This window is from a church in New Finland Woods, Saskatchewan. Outside the church is a monument that has my grandfather's name inscribed as one of the founders. In 2004 my daughter and I took a road trip (she did all the driving) to the Calgary Stampede after meeting up in Winnipeg. This area was on the way and we just detoured a bit so I could show her some of her heritage. 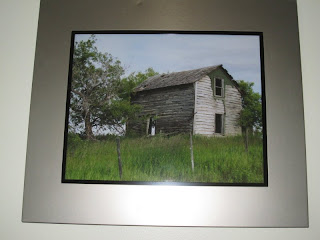 Another favourite of mine is old delapidated farms. We saw a few but didn't stop to photograph them all. This one I do believe was on the road to the church. 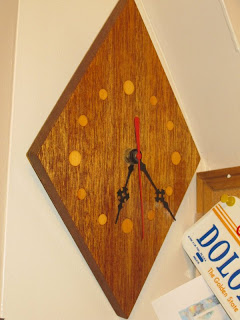 This is a clock that Laila made me when she was in junior high. The girls got to take shop class while the boys took home economics. This clock hangs in my studio/sewing room on a narrow wall that seems just the right place for it.
Posted by Dolores 4 comments: 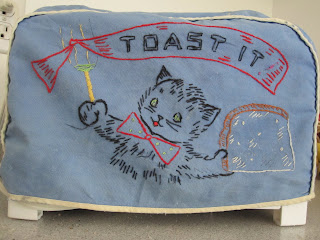 This lovely piece of embroidery was made by me. I have no idea how old it is but definitely a lot older than the second photo. I'm pretty sure the pre-stamped toaster cover was purchased at either Kresge's or Woolworths. For years it spent time in the linen closet with a bunch of other old stuff until my daughter found it and decided that it should be used. 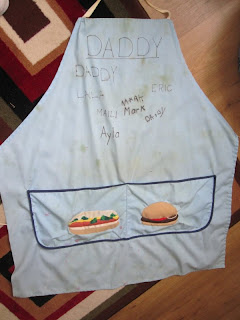 With Father's Day almost here, I thought I would show you all this beauty. This barbecue apron was made as a Father's Day gift from the little ones. Obviously Ayla was here so it must be about 25 years old (either that or I added her name later which would make the apron even older.) Believe it or not, it is clean but those darn stains will not come out. 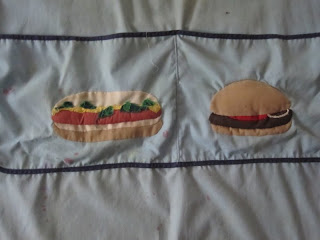 I used a bit of stuffing to give these the 3-D look. Everything was made from scraps I had on hand. I sewed most of the children's clothing and there were (still are) a whole lot of scraps around.
Although these may be judged vintage by some, I just think they're old. Vintage would be what my grandmother had.
Posted by Dolores 9 comments:

Lest you all think that I have forgotten about my monthly journal mini quilts, I haven't. I just didn't have the time since I was making t-shirts for my mom and doing other things that took priority. So, here's my little quilt for May - a tad late. 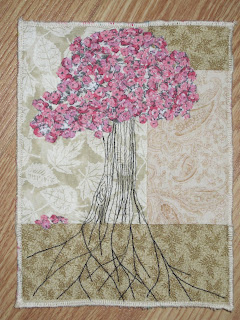 The idea came from Satu whose blog, Quilttales, I follow and who wrote: "I don't know how it looks there in Canada in May... But the first thing that came to me was the blossom of appletrees."
Go over for a visit and you can check out what she's working on right now. Her work is immaculate.
Now, whether or not this looks like an apple tree in bloom, I don't know but I did want to make a tree with blossoms on it. Here's the fabric from my stash that I cut out all those teeny tiny blossoms. 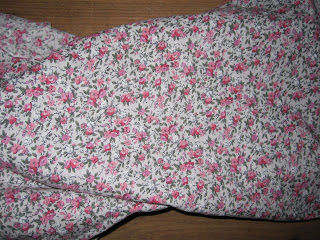 It's nice to just look around the studio and pick and choose fabrics to cut up. This is a really old piece of fabric that I have had for years that was probably bought for a garment or for a quilt but it is not a tight enough weave to be put in a quilt. It's OK for the back of mini's though - although I didn't use it for this quilt.
Just listening to a little Marco Antonio Solis on Youtube while I waited for these photos to upload. The last pic didn't want to upload properly and after 6 tries, I finally got it to upload in the way it was meant to - landscape, as opposed to the portrait that the other 5 attempts came up as. What I finally did was copy and paste the photo the way I wanted it and uploaded the 'new' image. It worked. I don't know why it wouldn't do that the very first time.
Posted by Dolores 8 comments:

Tile and a Gift 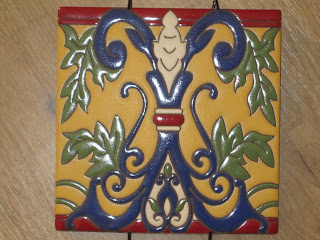 I have had a fascination for tile for a couple of years now. This is the tile that started it all. My daughter Maili gave it to me as a gift - either Christmas or my birthday or perhaps, just because. 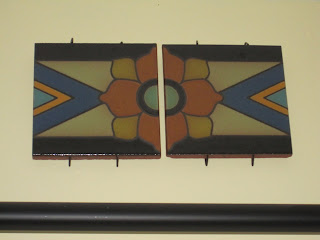 These are a couple that could be put either way but I liked the idea of the flower in the middle instead of the diamond shape that would have appeared if I had hung them the other way. These are above a window in the dining room - except we use it as a computer room. 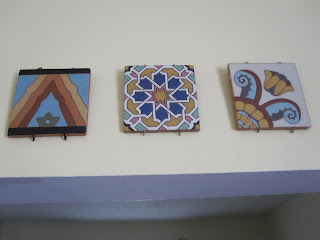 These are in the same room but are hung above an archway leading into the living room. 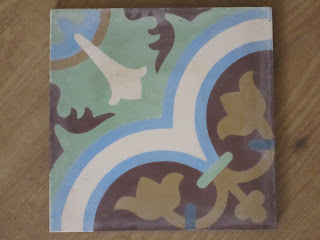 This one is almost 8 inches square and was given to me by Casey, Maili's boyfriend. 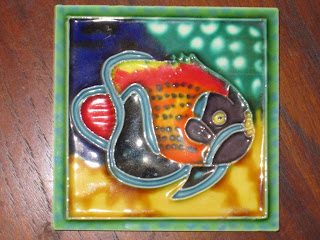 This is the smallest one I own at 4 inches square and is probably supposed to be a coaster. I purchased it on a trip to California. It just had such wonderful bright colours - and it was on sale. 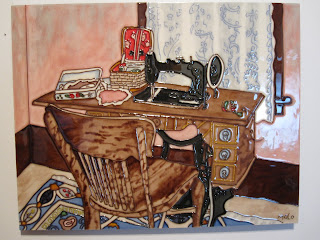 Since I own a treadle machine, this tile means a lot to me. It was a birthday gift from my eldest daughter Laila last year. 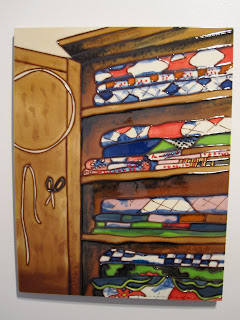 This is the companion piece to the one above and since I am a quilter, it is perfect. Both of these tiles are 11 by 14 inches and were delivered by Canada post from British Columbia. Both were wonderfully intact. 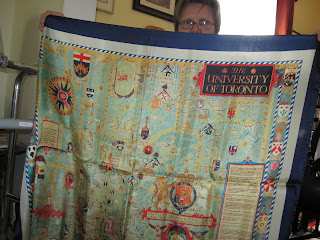 And lastly, here's a photo of my Mother's Day gift from my son Mark and his wife Kate. It is a scarf with a reproduction of a map of the University of Toronto. I love it. The legend goes from 1796 to 1935. Upon inspection though, I noticed that they left out a street. It no longer exists because when I was little they built a huge building complex on the site. It was called Division Street and would have appeared in the lower left corner where that blotch of red is. Maybe I should do some research to see when they put the street in. My children do seem to get me stuff I like.
Posted by Dolores 6 comments: