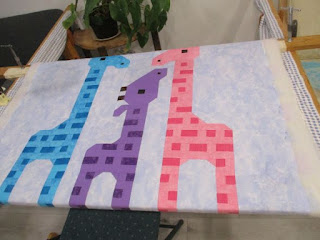 This is all that I have left to quilt. I'm trying to think of how to bind it - meaning what colour. 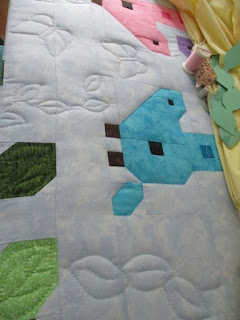 Butterflies and leaves are what I finally decided I would quilt in the big open sky area.
And when I'm not working on the quilt, I'm making more hats. 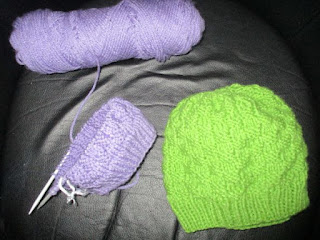 This is with the flash on my little camera. The green isn't a lime colour. 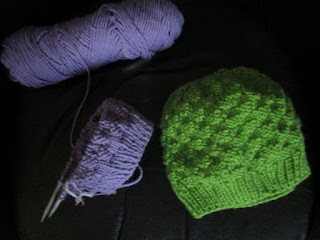 This green is closer to the colour but it's still not this bright - photo without the flash. My two little granddaughters need new hats so these are just trials. Pink and purple are this years colour so I shall see what I come up with. I will probably try a few different patterns too. There's bound to be someone who fits whatever size I make. I have a bench in my hall that has storage and so I keep hats, mitts, sweaters and masks in it for the little ones. They come in handy at times.
Posted by Dolores 3 comments:

I finally got the giraffe quilt on the frame and have started quilting it. I have it set up in my kitchen. 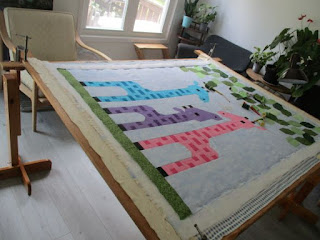 There's lots of light coming in from the window. I do use my lamp though to see where I am stitching. 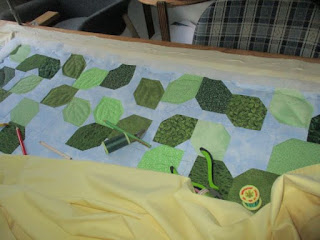 When I am not quilting, it is covered with a sheet. 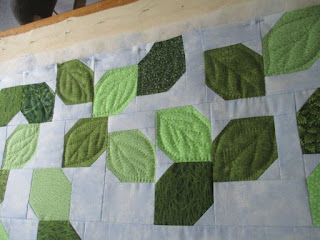 I really like the effect that quilting gives to something that is flat. It took me a bit of thinking to come up with how I was going to quilt the leaves but in the end, I just sat down and freehand drew a leaf with veins in each pieced leaf. I just have to figure out what on earth I am going quilt in the big sky area. Maybe some falling leaves...
Posted by Dolores 3 comments: 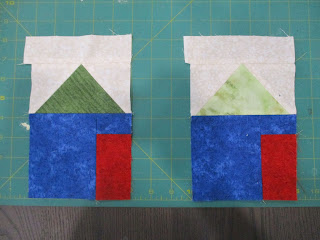 These are quilt blocks that I put together for one of the guilds I belong to. I requested 4 kits thinking I had time during the summer to get them done. The first one was a challenge. Those triangles (the sky) on either side of the roof had to be sewn in one way only. If they were switched, the sides were not straight. I think I unsewed them twice at least if not 3 times. As you can see, the top piece (the sky) is a tad longer. 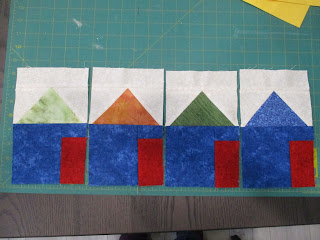 The block is supposed to measure 5" by 8.5" and the instructions said to use a scant 1/4" seam for all seams except the roof part which could be sewn with a full 1/4 inch. Well, try as I might, it was not to be. The 5 inches was fine but even with scant seam allowances, it only measures 8.25". I have to say that I did not cut the pieces out. The kits were pre-cut and you just had to sew them together. 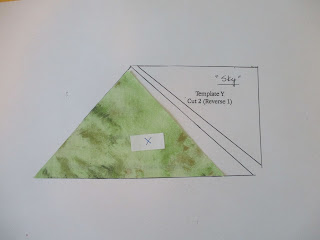 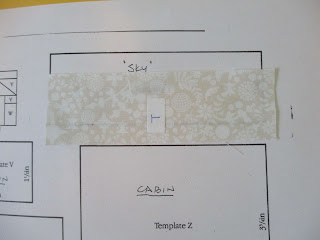 After sewing all four kits/blocks together, I finally figured out why they were not finishing to 8.5". As you can see, the sky fabric is 1/4" too long. 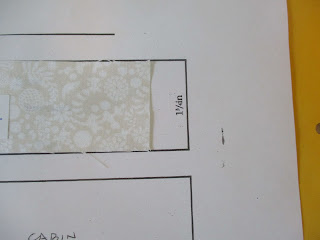 The 1/4" extra should have been added to the height of the piece, not the length. That is why all of my 4 blocks finish at 8.25" instead of 8.5". Apparently, no one has mentioned a problem with their kits. I don't know how many of these small house blocks were taken by the guild members because there were log cabin blocks and bigger house blocks to put together too. 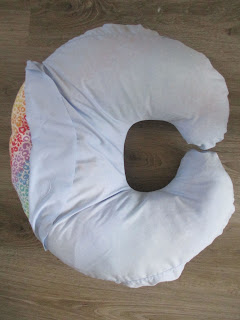 While I was in England, my daughter requested a new cover for the nursing pillow that I had made her a few years before. It was made with that rainbow coloured flannel. She wanted a plain cotton on top because she felt that the flannel would be too warm for the summer. Well, I didn't buy any fabric but my son-in-law was getting rid of some brand new shirts that had logos on them. They seemed to be wide enough. 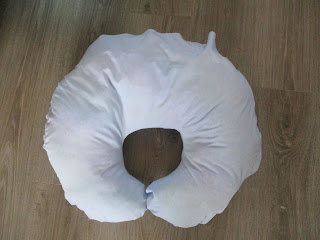 I put the nursing pillow on top of the shirt and used a pencil to draw around the pillow making sure to add seam allowances. It was all sewn by hand (back stitch for strength) since my daughter had sold the little sewing machine that I had used previously. Here, you can see that I left an opening in the outer edge so that I could slip the pillow in. I made sure to clip the curves. 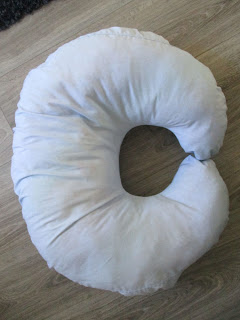 All done. Not perfect but where there's a will, there's a way.
Posted by Dolores 2 comments: 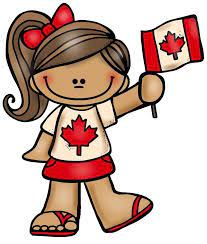 The old and the new in England

Over the years I have made a few aprons for family members. I don't have to make any for myself since I still wear the ones that my mom made. I love her full aprons and even though I use a different pattern, they are still a full apron. I don't think I have ever made an apron that doesn't have a top or 'bib' part to it.

I found this in my daughter's kitchen drawer when I was visiting her family not long ago. I always wear an apron if I am cooking or washing dishes. 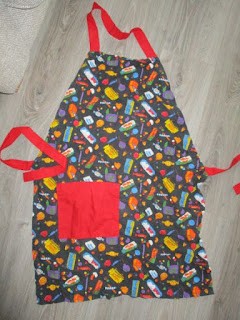 The fabric has candies on it. I still have some of it left and should really use it up. Perhaps a Hallowe'en bag? Or included in a string quilt? I have no idea when or why I acquired the fabric.
This is my latest knitting project. 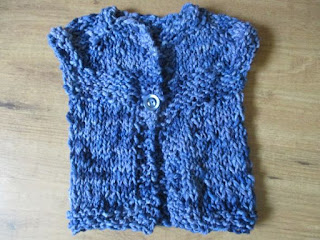 It's a Wee Speedy 2 pattern - free on Ravelry. I had purchased the yarn a few years ago. I saw this little sweater in the window of my local yarn store window in a yellow/gold colour and was then tempted to go in and ask about the pattern and yarn. They had no more of the yellow/gold colour but they did have this lovely denim colour. It's cotton and thick and thin yarn. When I asked about the pattern, I was told that it was a free Ravelry pattern and so I purchased the yarn intending to make it but never did - until a couple of months ago. This will fit the little newborn who is now named Phinneaus Hunter Oak. It took quite some time to decide on a name that both parents were pleased with. I'm sure he will end up being called Finn.
Posted by Dolores 2 comments: