Going back in time

In January, while I was in England, I kept busy doing a bit of crocheting. 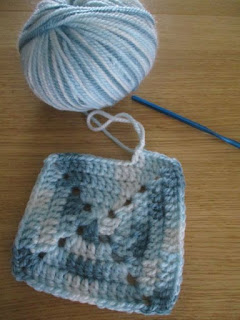 I had purchased a couple of balls of yarn from Fabricland with the idea of making the new twins something. 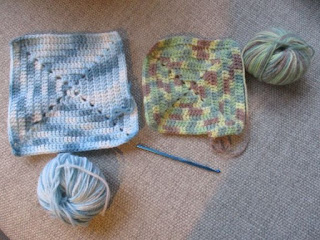 Luckily, there were two different balls of yarn. 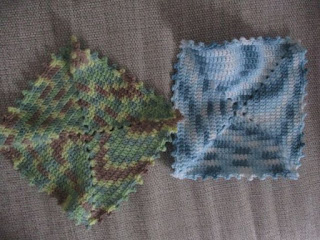 I don't often crochet but I don't mind doing it. 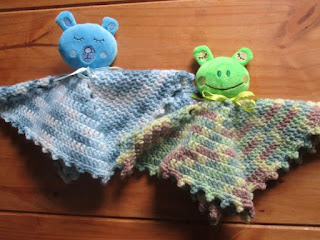 These are the finished items - a ball of yarn, directions and a soft, stuffed head. 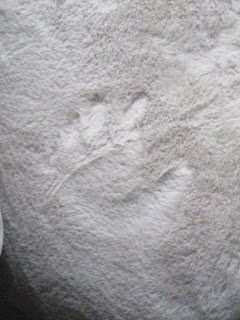 I thought this was interesting. 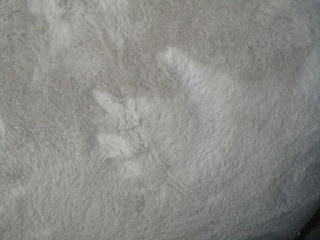 It's a little hand impression on a soft, thick blanket. It was of one of the twins in England. 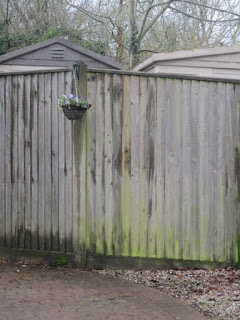 I saw this on the way to the park. It's a hanging basket of flowers - in January. 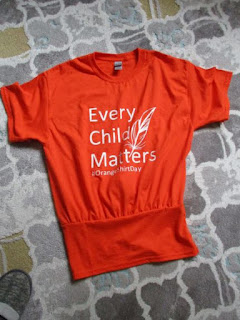 Tomorrow is Canada Day and instead of wearing the traditional red and white, a lot of people will be wearing orange to "honour the Indigenous children who were sent away to residential schools in Canada." My middle daughter got an orange t-shirt from a friend of hers but it was a large size. She brought it over along with a book that has instructions on 101 ways to transform a t-shirt. 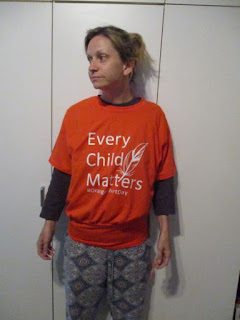 Here's her sister wearing the t-shirt after I transformed it. I just cut off a large chunk from the hem, sewed it so it's thinner and then gathered the top part. I sewed the two pieces together and voila, an easy fix. 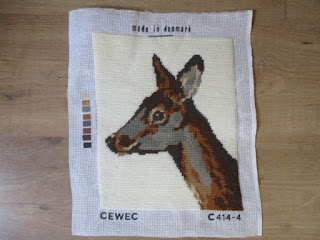 While doing some searching and cleaning, I came across some needlepoint that I had forgotten about. 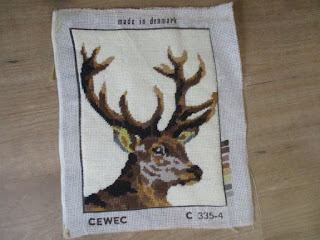 There were actually two. I asked my eldest daughter, who lives in British Columbia in an area where there are a lot of mule deer, if she wanted them. 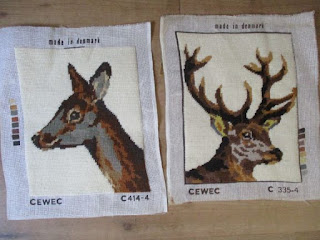 They need to be framed and the buck actually should be cleaned first. I still have another 'oldie' that I made but it's quite slanted. It's a couple of pandas and I suppose I could finish it and give it to one of my grandchildren.
Posted by Dolores 1 comment:

The old and the new and more...

Over this past Christmas, I spent time in England with my youngest daughter and her family. Since Covid kept everyone celebrating with their own family, no one was coming over to our house so I thought I would celebrate with my youngest grandchildren, the twin boys and their 3 year old brother. I had a return ticket from my stay there last spring/summer so I surprised my daughter. They have a granny flat where I did my quarantine so it all worked out. 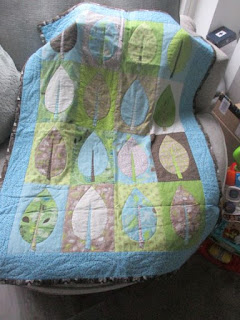 While I was there I came across this little quilt that I made for my youngest daughter, Ayla. The original design was in red, white and black (that is what was shown on the pattern) but both Ayla and I like turquoise. I think this may have been a kit from Connecting Threads. I didn't take note of the year that would have been on the label but it was probably less than 10 years ago. 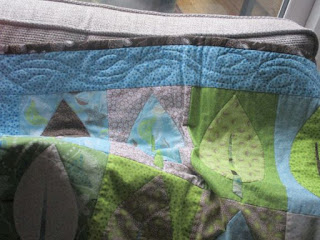 Here's a little close-up of the quilting in the border. 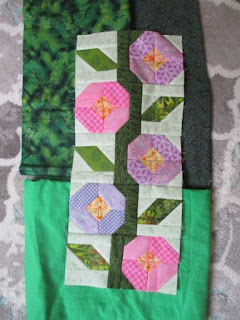 Since it is now spring, I decided that my hall wall could use a bright, but small, wall hanging. I have liked this pattern for quite some time now and one clever blogger, Life in the Scrapatch took the free pattern called Pretty Posies from EQ and made it into a very easy pieced quilt. The only thing to keep in mind is which way you make the leaves. Some of them should be sewn reversed. Once I sewed the middle part together, I decided to audition a border. 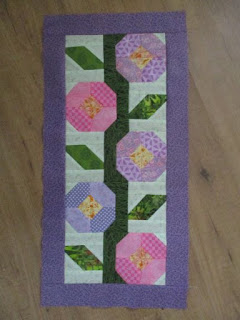 As you can see, I didn't go with a green border. 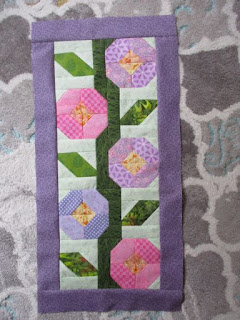 I haven't had time to finish this. I was just thinking on machine quilting it so I didn't have to baste it or put it on a frame.


On a personal note: My husband passed away on May 27th. He had had emphysema for many years and only quit smoking about 4 or 5 years ago mainly because of the grandchildren. Sadly, it wasn't soon enough. My family has been a great help and they are (or will be) all here this month. I have been busy each and every day but this post has been on my mind to compose for a while.
And...
I just received my second dose of Pfizer on June 6th so my youngest daughter and I fully vaccinated. She lives in the UK so she got the vaccine earlier than we here in Canada. I can't believe how many people are not going to be vaccinated. I don't know if I want to be around them. Some are neighbours and others are friends and even relatives. All of my children have had at least one dose and are eager to get the second one when they are eligible.
Posted by Dolores 4 comments: