I've now entered a quilt show, this virtual one. Thank you to Amy for organizing this! Click on the button to the right and see more quilts in this virtual show. 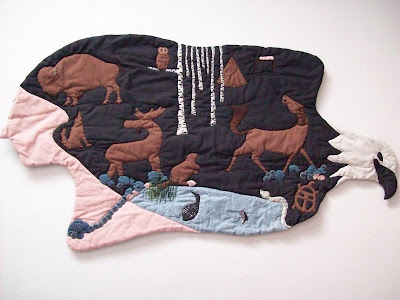 I have two favourite quilts but I will show this one since I already showed the other one. I made this for a quilt guild challenge in April 1990. 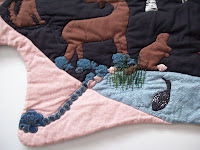 We were given three fabrics: the tone on tone that I used for the flesh; the blue print that I used as the necklace and for some of the flowers; and another print that I cut a motif out of to use as the snake and some of the pink flowers. The fabrics had to be visible on the quilt top. We could use our own fabrics but I can't remember how many. I used black, brown, white and the blue for the water. The finished dimension had to be less than 120 inches in circumference and I do believe the comment that went with the 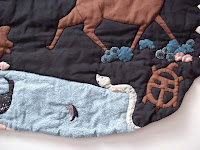 instructions was something to the effect of being creative. What I did was to take two tape measures and lay them out on the floor in the rough outline of what I had in mind. This was after poring over loads of quilt magazines and my Southwest Art and Art of the West magazines. I knew I wanted to do something that had a native theme. I also wanted something unique. I came up with "Mother Earth and the Great Spirit." Mother Earth's hair flows into the the eagle's wing. It was loads of fun trying to capture what I wanted. It has applique, reverse applique, embroidery and I even used white-out with its brush for the loon's necklace and spots on the back. I think I have to re-apply the necklace. The horse is looking back at its owner who has died (the shroud - up on sticks, so that animals don't get to the body.) I populated it with animals that my friends and children liked. All free-hand drawn, cut and appliqued or embroidered. It is by no means perfect but I do love it. I have recently taken it off the wall since the sun from the skylight is fading it. I didn't and still don't really work in prints. That's why I cut the prints up and used the motifs in them.
There were other quilts that were not the usual square or rectangle. Other people were just as creative with the fabrics and the instructions - one was even a 3-D mobile piece of art.
The guild challenge quilt that won was an appliqued quilt that was square. So much for creativity. Personal comments from several of the guild members later was that the judges were quite staid and old-fashioned - as were a lot of the members.
Posted by Dolores 39 comments:

As I was nodding off to sleep, I was thinking of my new header photo. It brought the Three Stooges to mind. If you remember them, then perhaps you may remember "Niagara Falls...Slowly I turned, step by step, inch by inch...."
So, I decided to see if there was a youtube on it and here it is:
http://www.youtube.com/watch?v=_yJBhzMWJCc

I liked Curly best of all - the original one that's in this clip.
I wonder if Niagara Falls is still the Honeymoon Capital of the World???

On a different note, little one (youngest child, youngest daughter) just found out that she passed her real estate exam. I guess she is now officially a real estate agent. It was a trying time for her since it took her forever to get through (pass) with part two (there's three parts to being a bona fide real estate agent.)
Daughter-in-law finished her masters program last Friday and so she can officially read for pleasure now. (It's a good feeling - honest, been there, done that last year.)
Posted by Dolores 5 comments: 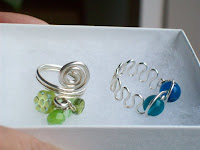 Here's my bling. Bought at a really nice store on the weekend just for me. Two lovely rings. A gift for me from me. 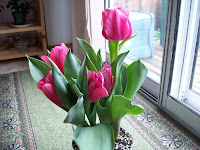 Another purchase for me. We had the family weekend dinner and I really wanted some colourful flowers. These will be planted in my garden when they are finished blooming. There was only one tulip open when I bought it but it didn't take long for the others to open up. It sort of makes up for today's weather. Sort of...
Posted by Dolores 6 comments: 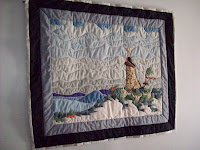 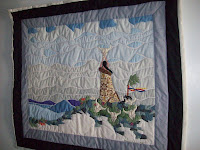 This is the second quilt you see as you enter my home. I just looked at the bottom right-hand corner - I made it in 1987. Wow, it sure is a long time ago but I still love it. It is a rendition of a picture taken from the book Buffalo Woman by Paul Goble. I love his artwork and have several of his books.
Posted by Dolores 3 comments: