While I was in England during December and January, I knit my littlest (youngest) granddaughter a blanket that she could use while sitting in the stroller. 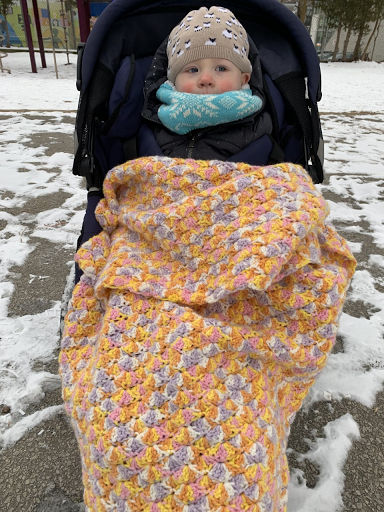 Here's Aurora using the blanket. We have had some really cold days but it looks like Aurora is bundled up nicely. 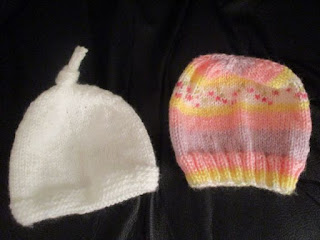 I brought home some double knit yarn from England and, since I like making small things in between bigger projects, I knit a couple of hats. These are free patterns on Ravelry. The one on the left is called 'Baby Hat With Top Knot - Tegan' and the one on the right is called 'Basic Baby Hat.' My daughter claimed them for her friend who recently had a little girl. 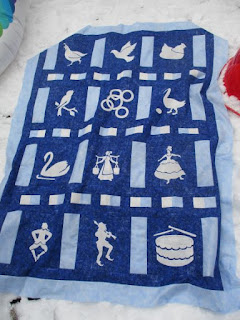 Here's the finished Christmas mystery top. I wanted to take a photo of it outside but there wasn't anyone willing to hold it up for me so I just placed it on the back deck. It worked out well. I have some of the light blue fabric left over to bind it with but that will have to wait for later. 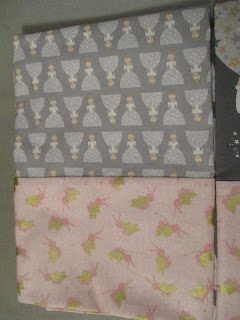 This is one of the pillowcases I made for Christmas for one of my granddaughters. 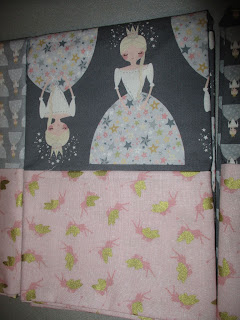 As you can tell, the theme was princesses. 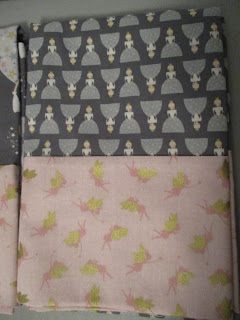 I purchased the co-ordinated fabric from Sew Sisters in Toronto. It was on sale and I thought it would make perfect pillowcases. The pink fairy fabric was in the mystery box I also purchased from them. 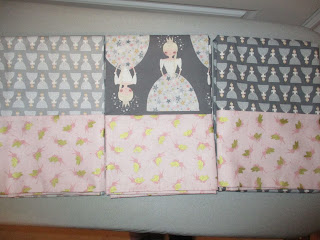 Here they all are. Unfortunately, because I wasn't here at Christmas time, they weren't handed out but once I got home, they were the first things the little ones got. 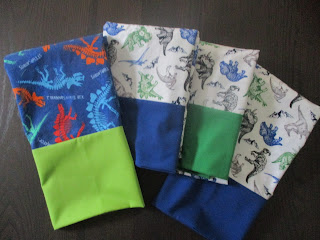 The boys all got dinosaur pillowcases.
Well, that's it for the finished projects at the moment.
Posted by Dolores 2 comments:

I am finding myself switching up what I work on daily. 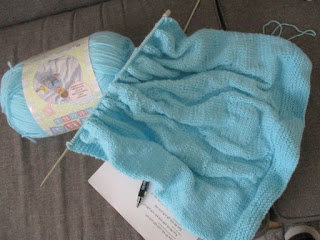 This is a little baby blanket that I am making for no one in particular. I belong to a Facebook group called Warm Baby Project that is based in the UK. They have offered free baby blanket patterns and they usually have some kind of design knitted right in. The first five patterns were free and this sixth one was only a couple of dollars so I decided to try it. I'm only on row 122 and there are 167 rows altogether. That means I have two more pages to go. Counting is all you have to do since it's just knit and purl. 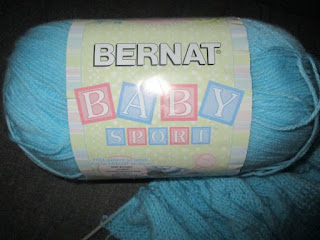 This is the yarn I'm using. It was on sale somewhere and I thought I would pick it up and use it for some charity knitting. 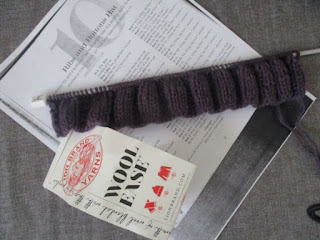 I have also started a slouch hat. This is on hold right now. 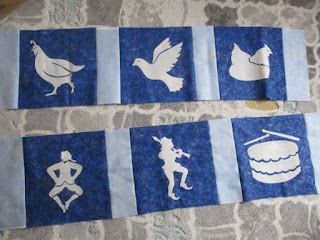 In the sewing department, I'm also working on finishing up this Christmas quilt top. It was a mystery quilt that I started early in December before I left for England. This one is a fused applique project. There is another red and green pieced Christmas mystery quilt that I signed up for too and was working on at the same time but I have left it for now. Too many things to do all at once and I found that some of the fabrics were too close in shading and it was confusing me. I need to concentrate in order to complete it. 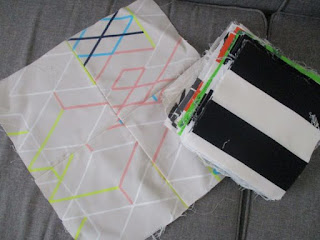 My eldest daughter requested some bags just to keep things in. Odds and ends or toys. I have a lot of longish zippers and a lot of these Ikea scraps (that are heavier in weight than cotton) so I thought I would use both to make some bags. After I found these pieces, I noticed that four had already been sewn together. Bonus for me. 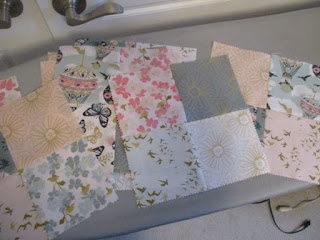 And lastly, I have started a baby quilt for one of my daughter's friends who had a little girl in late January. These were charm squares that my daughter arranged in a four patch. She wanted something more modern and neutral in colour for them instead of pink and mauve. The pattern is an easy one called Breezy Charm Quilt and it's a free pattern from Tacy Gray. I had all the fabric put aside before I left for England so I haven't had to hunt around for anything. I shall show you the completed top once it's all put together. Same with the Christmas blue and white one. 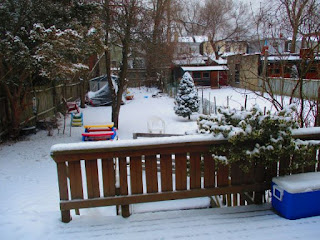 We had a bit of snow this past week. 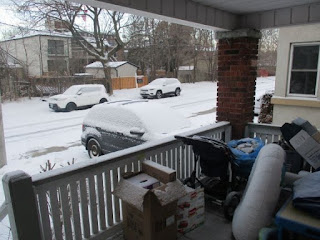 We had some really cold days too. 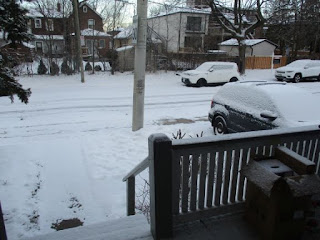 Some of the snow on the sidewalks melted in the sun and a bit of it came back. On Monday it's supposed to be a high of 3C and Tuesday we should be at 4C so perhaps more of this snow will be gone again.
We are still in lockdown and it has been extended for another two weeks. I don't mind since I'm such a homebody anyway and I have so many projects that I can work on to keep me occupied.
Stay home, stay safe.
Posted by Dolores 1 comment:

It is a sad, sad day when people you trust betray you. My son and daughter-in-law, both public school teachers, have been living with us for the past 7 months. They were to move into their renovated home early in December but so far, they are left with just a shell of a house. The contractor that they hired, the one who they researched and who was acredited by the Better Business Bureau, deceived them and took their money. They are left with very little savings to hire a new contractor. My eldest son has started a Go Fund Me page to help them get back on their feet and into the house for which they had planned and dreamed.

If you feel at all inclined to help, Thank You from the whole Sedore family. 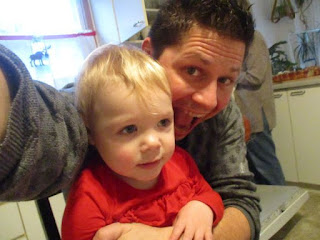 Daddy, ever the joker. 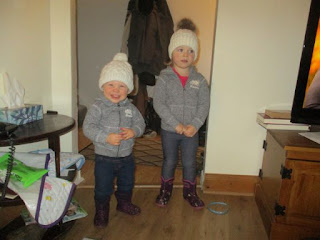 Ready for the outdoors. 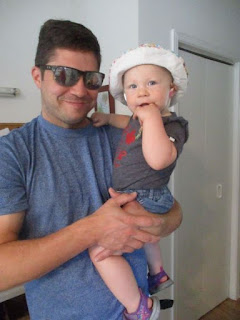 Daddy's little girls and this one was even born on Father's Day. 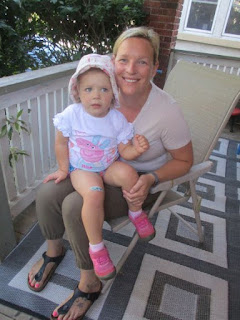 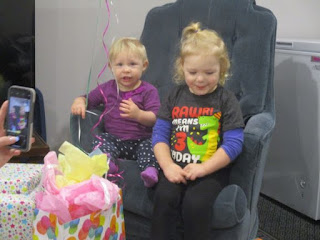 The birthday girl sharing space with her little sister. 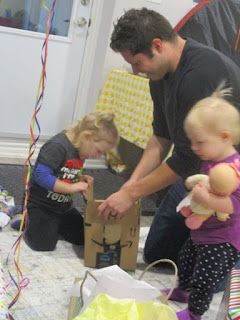 What is in there? 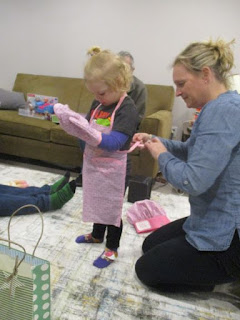 The little kitchen outfit I made with the chef's hat on the floor.