See this? The thread...I mean. 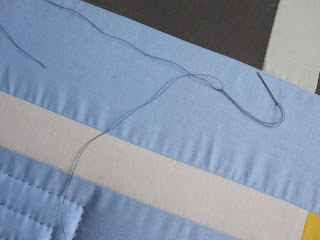 This is what I was working on, minding my own business. After taking a couple of stitches, I pulled the thread through. 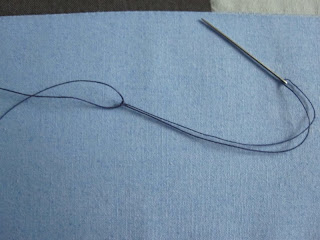 Maybe you can all see it better now. It's a knot. I tried to loosen it but it just would not budge. I don't know how on earth it came to be there. As I said, all I did was pull it through the quilt. I have to cut it and re-thread the needle. It's not a life-threatening situation but it is annoying. I will get back to it but not just now. I have other things that need to get done. See you in a bit.
P.S. what's up with Blogger now? Why did they change the way you upload photos - yet again. This time, if you do not upload right away - if you go and check another window, it doesn't click. You have to close the upload window and then click on the little icon - again. At least that's what happened to me. What a pain.
Posted by Dolores 8 comments:

It was a question a while ago that has led to this post. Myra had seen a quilt that I showed here. She had not seen how a quilt on a frame gets quilted in the middle. With all the machine quilting being done these days, some of the new quilters may not realize that hand quilting a big quilt was, and is, easy. Some people who hand quilt prefer a hoop and I have used a hoop but I have also just basted a quilt (with lots of basting) and not used a hoop at all. Here, I will try to show just how easy it is to hand quilt on a frame. All you really need is 4 C-clamps and 4 boards 1" X 3". Two of the boards have to be longer than the length of your quilt and the other two have to be longer than the width. Oh yes, a staple gun is needed too along with some fabric strips. 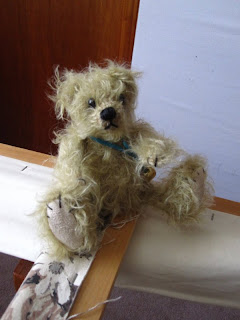 Little Ron wanted to know what these boards were for since they were just lying in the corner of the computer/dining room. I told him they were quilt frame boards and that I wanted to put a quilt on a frame but I needed to see if I had the boards to fit. I hadn't realized that I had so many boards of various lengths. Here he is sitting on a couple of the boards. You can see that there is fabric stapled to the boards. The quilt backing and (hopefully) the quilt top too gets pinned to the fabric. Since it has to take a lot of pulling and tugging, the fabric should be doubled and should be a fairly tight weave. The floral fabric here is not necessarily a tight weave but it is a sturdy fabric and this particular board is not big. 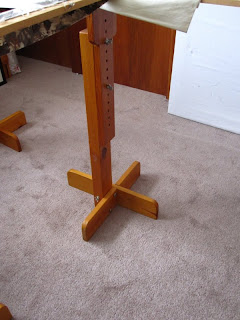 While I am lucky enough to own a set of 'legs' for my quilt boards, you don't necessarily NEED them. You could sit the frame over the backs of 4 chairs. These particular legs were made by a wonderful man whose wife was a quilter and he used to sell the legs and oval frames (both with a stand and without) at quilt shows. I used to attend quilt shows with my friend Marg and she is the one who first got a set of these. They are fully adjustable. I am short and so I like the frame to sit shorter than other people like it. 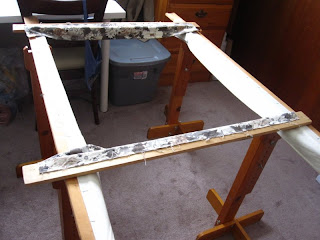 Here are the boards sitting on the legs. There are grooves on the legs that doesn't show up in these photos. If anyone is interested, I can take a better photo. 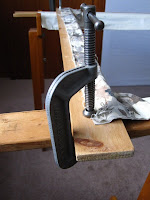 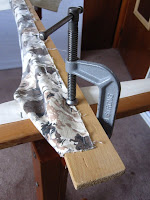 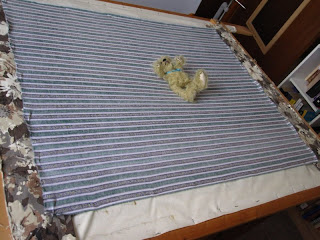 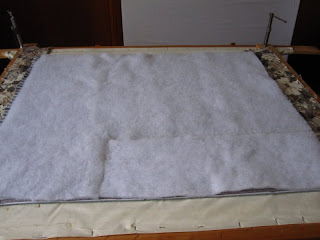 Next, lay the batting on top. The quilt I decided to put on the frame is the "Gees Bend Revisited" and since it is fairly small and not going to be entered into a show, I pieced the batting. 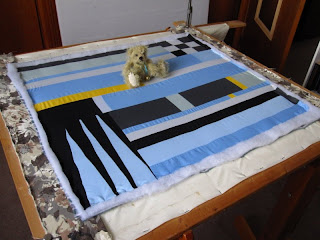 Then of course, comes the top. Here you can see that the quilt top is pinned to the fabric that is attached to the quilt frame. Once everything is pinned (from the middle outward) with quite a few pins, then you undo the C-clamps and tighten everything both ways - making sure you don't tear the fabric. 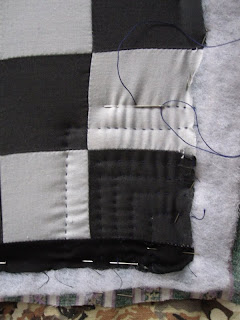 And now it's ready to quilt. Normally, with a full-sized quilt, it would be quilted from the middle outward, but I had this idea in mind when I thought about how I was going to quilt this and so I started in the corner. You should leave about a quarter of an inch from the edge since the binding will be going on it after. I chose not to border this and I was going to use masking tape to keep the lines straight but then I figured I would just go for it and eyeball the lines. 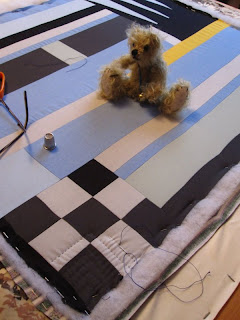 And here's my mascot. He's better on the quilt than a cat would be. I just hope he isn't jumping on it when I'm not around. Once I have completed quilting across as far as I can reach, I will show you how to "take a turn." 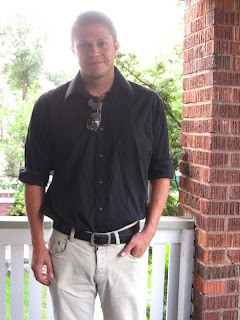 For the new teacher.
Eric did teach last year but he was a long term occasional taking over for a maternity leave. This year he is a bona fide board member. He is very happy and will be teaching half time gym and half time with those who need one-on-one help. The photo isn't the best and here's the other one I took as he was leaving... 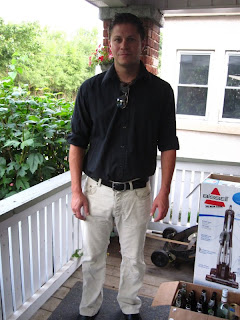 amidst the recycling.
Posted by Dolores 12 comments:

I really wanted to sew garments again and Mark wears what I sew. I asked him if he wanted me to make him a short-sleeved shirt and he said yes, since he only had one (other than t-shirts.) So, I took some of this - beige, denim-looking fabric...

and I used this pattern. It had been hanging around for years and looked quick enough to do. There is no back yolk and the collar is in one piece. The sleeves are sewn together with the side seams so there is no set-in sleeves. Even then, after not sewing shirts for quite a while, I mis-sewed the hem. It was only the front quarter and easy enough to unpick.

Mark came over last night to deliver extra copies of his new novel, SNOWMEN and tried it on without the buttons. It fit well and then I had him choose his buttons. I had lighter ones picked out but they were a tad bigger. He preferred the little ones. He won't get it until after the long weekend since he is writing again and supporting his friends who will be doing the marathon 3-day Novel Contest.
Note: He informed us that there will be a review of his book in a "small" American publication around Christmas time. Perhaps you've heard of it - Playboy Magazine? 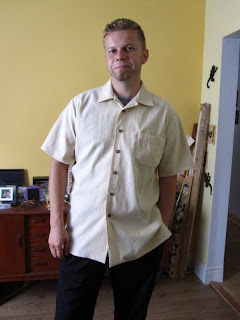 Mark just dropped in on his way out of town and so he took his shirt with him. Of course I had to take a photo before he left the building. (those are my quilt frame boards behind him.)
Posted by Dolores 13 comments: