Sometimes you just need a break from stuff you have to do and projects that are big. So, I decided to just play for a bit. I also thought that maybe I could make this into a journal project and do one a month. I'll see how far I get with that. 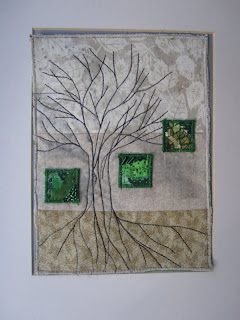 I had made some green fabric inchies earlier and incorporated them into this little 6" X 8" piece. It has a backing but no batting so it isn't technically a mini quilt.

I am nowhere near as ambitious as Joan at Rosegardenquilts who is sewing a face a day.
Posted by Dolores 16 comments:

For three years now my eldest son Mark has taken part in the 3-Day Novel writing contest. It takes place every year on Labour Day weekend. The object of the contest is to write a novel within a 3-day time frame beginning on Friday night at 12:00 midnight and ending Monday at midnight. You write on your honour anywhere you wish and the contest is open to anyone in the world. Yes, you are probably thinking that someone can write a novel during the year and then submit it at the end stating that they spent the entire three days at it but the judges can tell if it is a product that has been polished and one that has not been cranked out in three days. There is also a component whereby someone has to submit an affidavit stating that this person did spend the time writing that weekend.

In two previous years Mark wrote his novel at his home while his wife went away to a friend's cottage for the long weekend. This year Mark and three friends (who also submitted entries) wrote at a different location but one that had more space for all of them. They were not to communicate other than to leave notes to each other. Sleep was mainly snatches of naps and coffee was always on the go.
The prize for the winner of the contest is to have their work published. This year my son Mark WON!!!

I have a love affair with tile. I love the colours, the repetition and the way it is used. These are photos taken from our trip to Southern California last February. I really didn't know how many photos of tiles I had until I went to compose this blog entry. I hope you enjoy viewing them.

There is a unification in a lot of the tile used at this residential complex. You can see it in the green and the rust coloured sort of star-shape above and in the floor tile below - same shapes.

I have one of these red clay floor tiles. My daughter gifted me with one.

The tiles above have the same star shapes in the tile that I have mentioned.

The outer tiles of this fountain have the same star shape as mentioned above.

The photos above were taken at a new housing complex in Irvine that my daughter's work was involved in landscaping.

I'm pretty sure the photo above was taken at a train station close to San Clemente.

The two photos above were taken at an old hotel/apartment building in Santa Monica called the Embassy Hotel Apartments. Click on the link to see more photos. There was a really old elevator that could fit four people at the most with a door that you had to close manually. We only took the elevator once since we really didn't trust it. We only stayed there one night (very pricey) and then went to Venice Beach and also to see the houses that are situated along the canals that give Venice Beach its name.

This was at a restaurant in San Clemente. (Please ignore the date stamp - it is incorrect.)

A dry fountain just outside of the San Clemente Community Center which also housed the art gallery. Guess where I was heading.

A fountain at a shopping mall in Irvine.

Downtown San Clemente outside a Mexican restaurant (Del Agave) where we ate an authentic Mexican meal.

This last photo was taken in a walkway close to where the restaurant was. It may be hard to figure out but these were inset into the ceiling. In other words, I aimed the camera up to take this shot.

Some of these photos have been shown before on this blog but I thought it would not be a complete grouping without them.

NOTE: Please ignore the dates on the photos. It was a new camera and when a new battery was installed, I didn't know that the date had to be shut off or re-set.

CAPTIONS in no order whatsoever.

Pixel: "You mean you want me to go find mommy to open the door?"

Baxter: "Which one are you? Pixel or Digit? I can't see too good 'cause my hair's in my eyes."

Baxter: "Please....I promise I won't eat your treats anymore if you'll just get someone to open the door."

Pixel: "If the handle wasn't so far up, I could open it and then go find those squirrels."

The photo is on a card that my daughter's boyfriend Casey gave to us. He took the photo and I absolutely love it.

This is what my daughter picked out from the Wool Mill which is a yarn store just around the corner. It is almost the same yarn I bought for her from Michael's when we were in California visiting her last February.

I made this for her then. The beret recently went missing and so, I had to make another one to take its place. Gorgeous wool to work with and it took me very little time to finish it.
Posted by Dolores 5 comments:

Although the tree got taken down last week, I took photos of some of the ornaments before they went out of sight for another year. Here is just a small sampling. 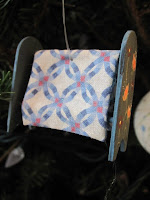 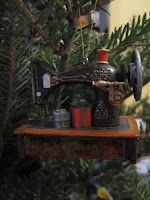 Mini quilt rack given to me by a fellow quilter and the sewing machine ornament that I saw and just had to have. I love these. 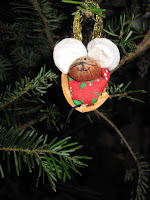 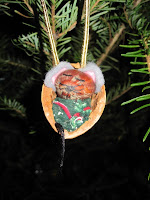 The little mice that my children made. 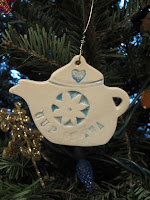 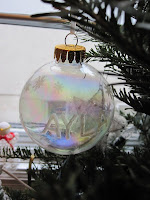 The teapot ornament that came from Ayla who is in London and just so she could spend Christmas in spirit with us, her glass ornament was hung. 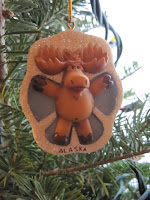 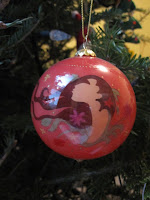 My children travel a lot - I mean A LOT and the Alaskan moose came from Eric when he was working on a cruise line one year. The glass ornament is a native design that Laila bought when she was in Vancouver. The name of it is "Spring" and I also have "Salmon." 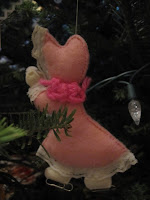 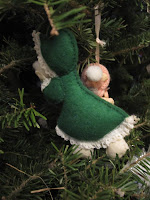 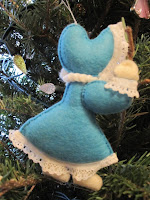 Each of the girls got her own "Skating Girl" one year and they always go up on the tree. 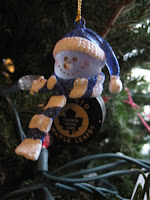 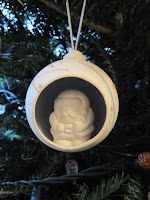 The porcelain globe with Santa in it is one of my favourites. It is hand crafted. Of course, the tree would not be complete without some hint of Canada's famous sport, hockey, and the favourite team here - the Maple Leafs.


The beaded ornaments below were made by Laila. I have two others that didn't show up well with my poor photography skills. I love these and wish she could find some time to do more beading. She used to make friendship bracelets out of embroidery floss when she was a teen. 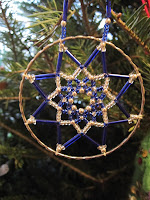 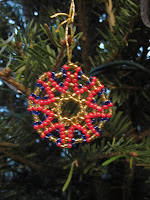