So far, I've made one for Luc, one for Patric and now here's the last dinosaur tail for Hallowe'en. 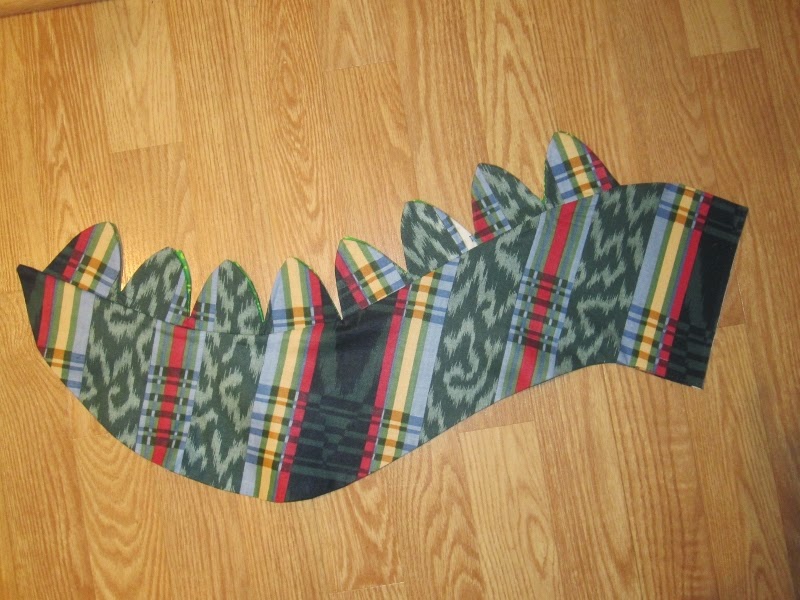 It's made out of light-weight upholstery fabric. My daughter takes her little boys out on Hallowe'en and the theme this year was dinosaurs - she likes to dress-up too. I free-hand made the pattern bigger than the ones for the little boys. I left the spikes the same size but just doubled the number. My daughter told me to use up some ugly fabric. 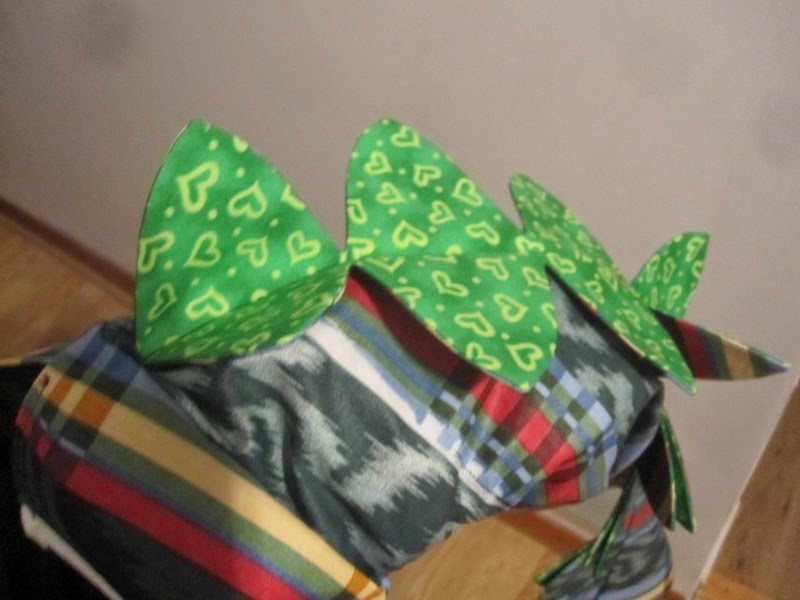 Sorry it's blurry but it's hard to take a photo of one's arm inside the tail while trying to keep the spikes open so I can photograph the accent fabric I used. It's the same as Luc's but in green instead of yellow.
Posted by Dolores 6 comments:

If you are in the Toronto area on November 14th and 15th, perhaps you would like to attend a quilt show. 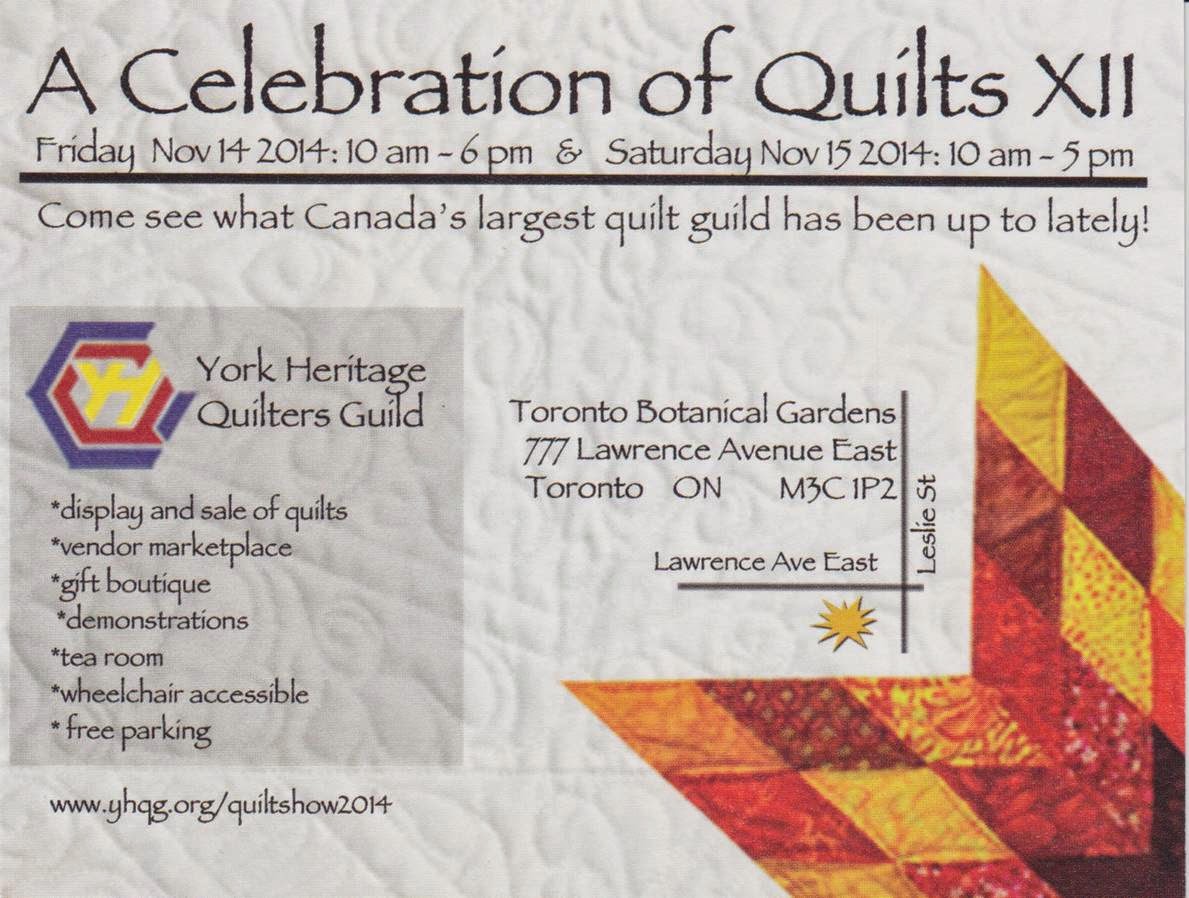 What is not mentioned is the admission which is $10.00 at the door or, if you know of anyone who will be attending the guild meeting tomorrow night, advance tickets are $7.00.

It is always a great show with many vendors.

Here's a link to the previous show.
https://www.flickr.com/photos/republic_of_me/
Posted by Dolores 4 comments:

Fall really is a wonderful season. I love watching the leaves turn colour. 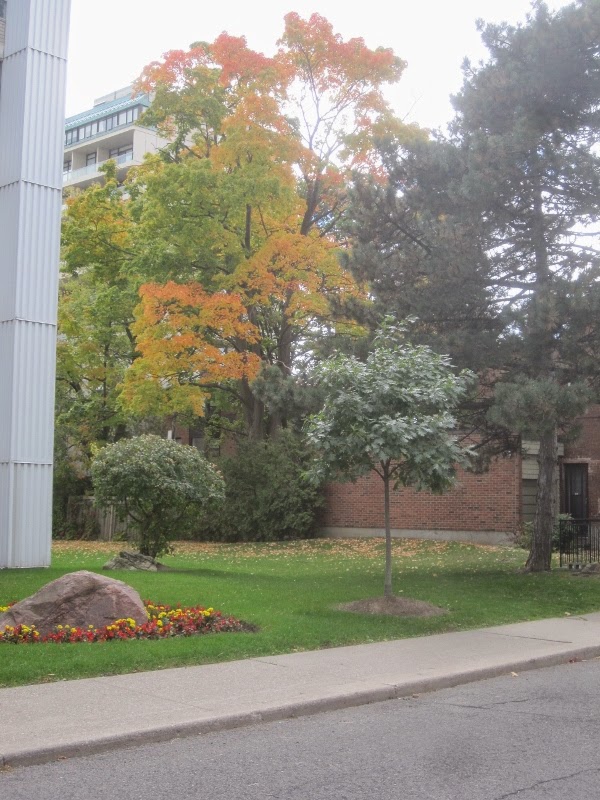 I think the matching flowers are a nice touch. 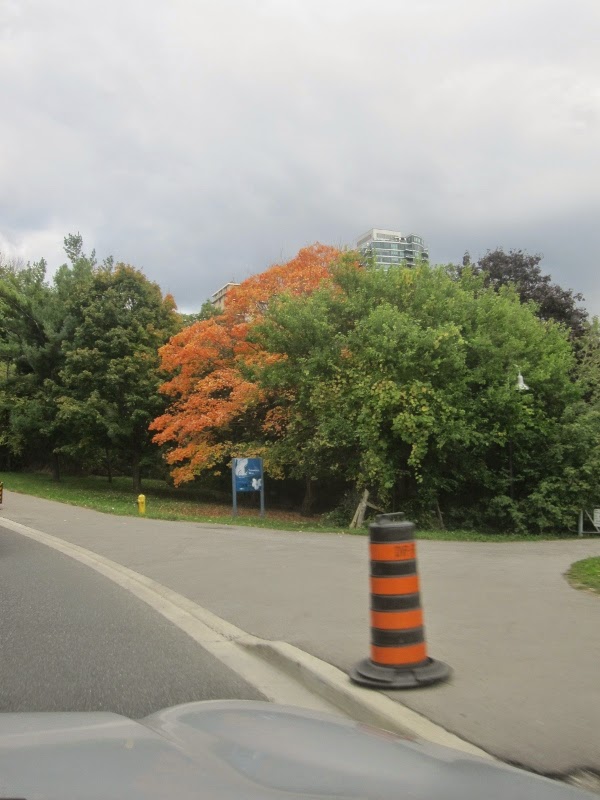 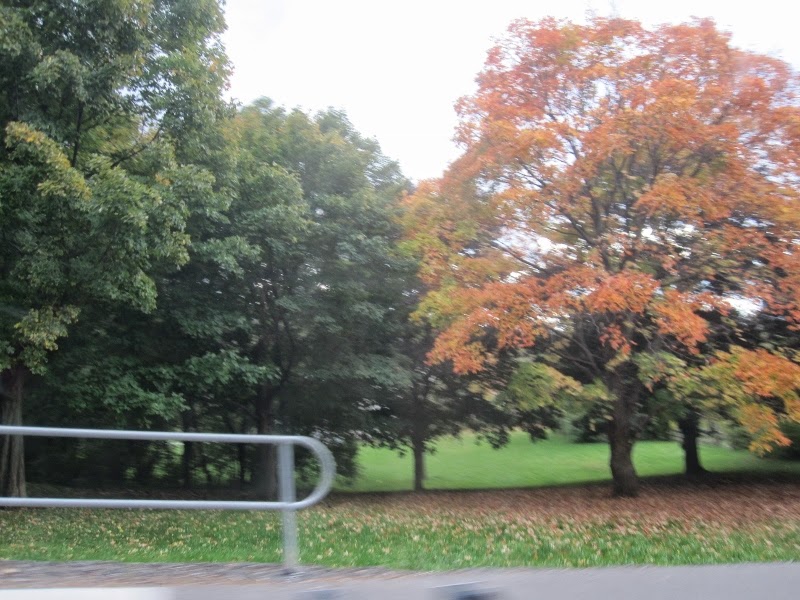 Just the beginning of falling leaves and all the clean-up that comes with it. 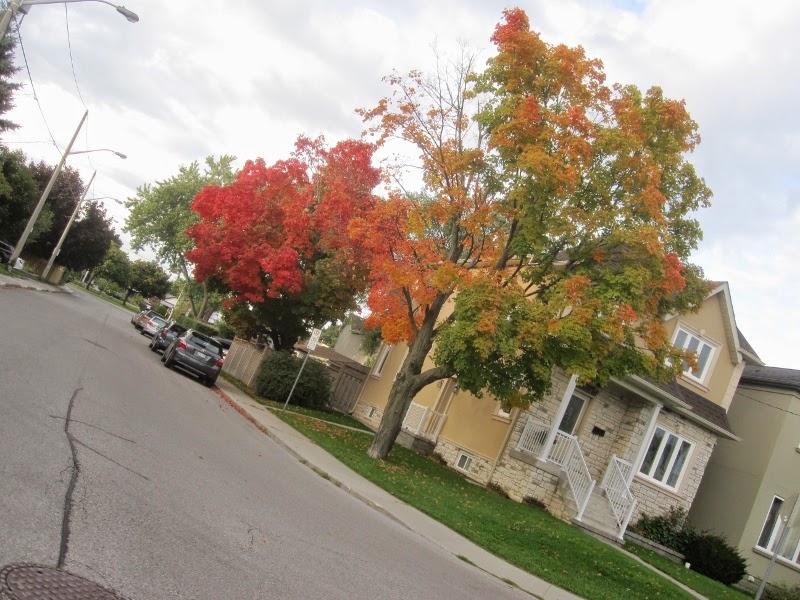 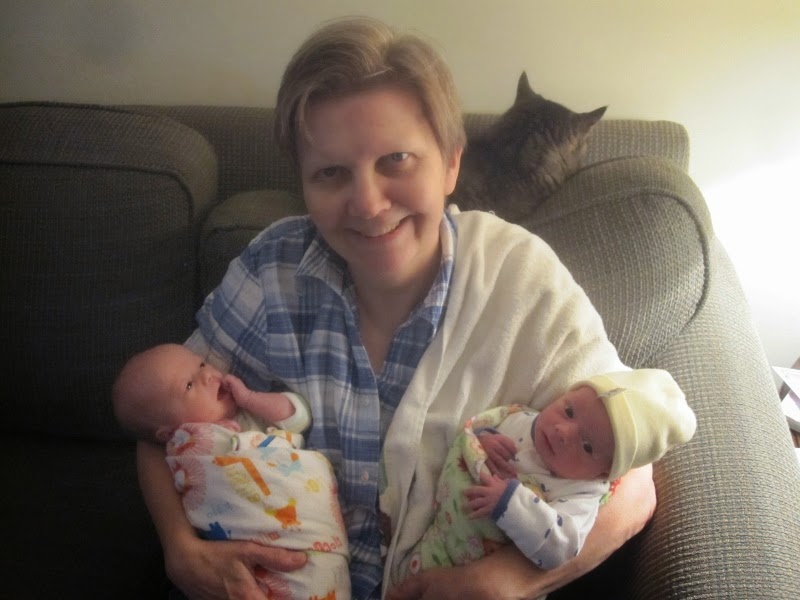 I consider these two little ones early birthday presents. Mackenzie and Severn, healthy little girls will be three weeks old tomorrow. The whole family (who live in town) came over for dinner today. We skyped and phoned the two who were missing. It was a very good day.

This year's Hallowe'en theme for my little grandsons is dinosaur. I have already made Luc a green and yellow tail. 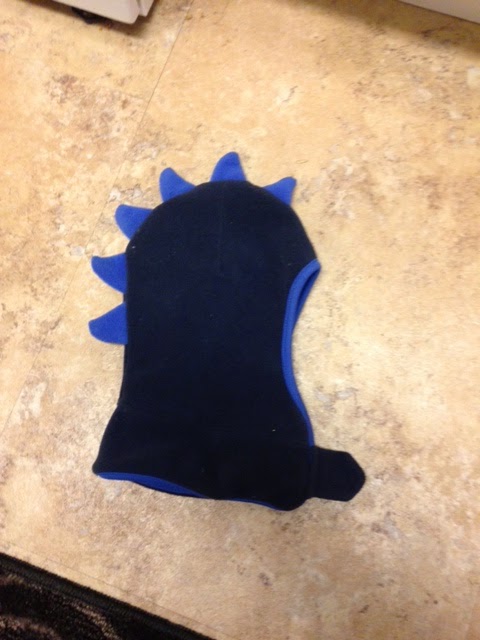 This fleece helmet is the inspiration for little Patric's tail 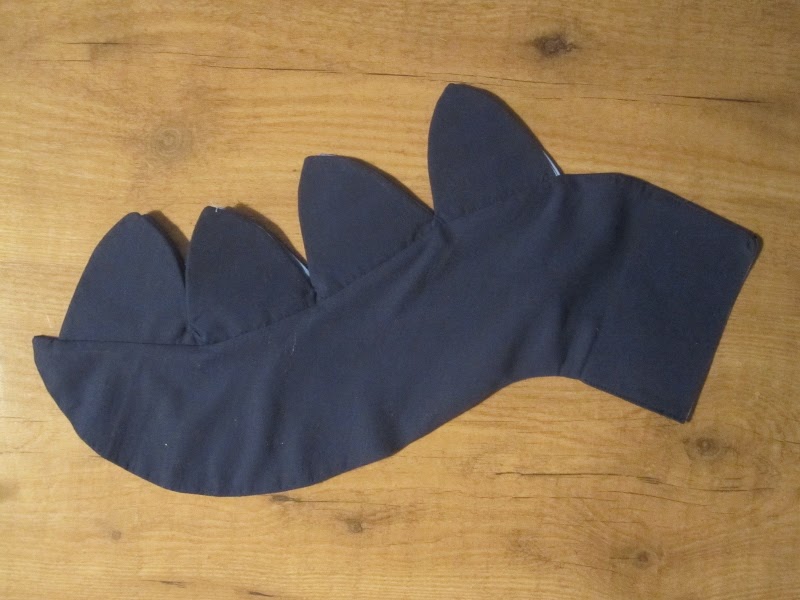 The fabric really is a navy blue. 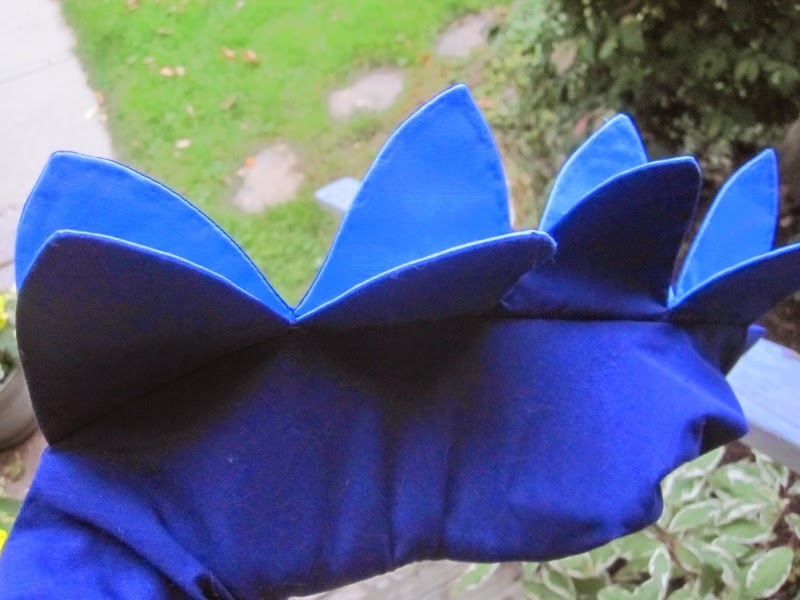 All done and ready to be sent.
But first, I have to make one more tail.
Posted by Dolores 5 comments:

Today is our Thanksgiving. Our family turkey meal took place yesterday for both the meat eaters and the vegetarians (tofurky.) Lots to eat and special time spent with the two new members of the family.

Last night was the second night that the Champagne Quilters got together. Last week we tweeked the quilt top and sewed the extra rows together. I say tweeked because Ann was not happy with the placement of some of the blocks. It seemed that there were some strips in the log cabin where the same fabrics were touching. It didn't bother Marg and it didn't bother me but Ann insisted and so we spent time taking some blocks out and moving them. Not a big deal really. 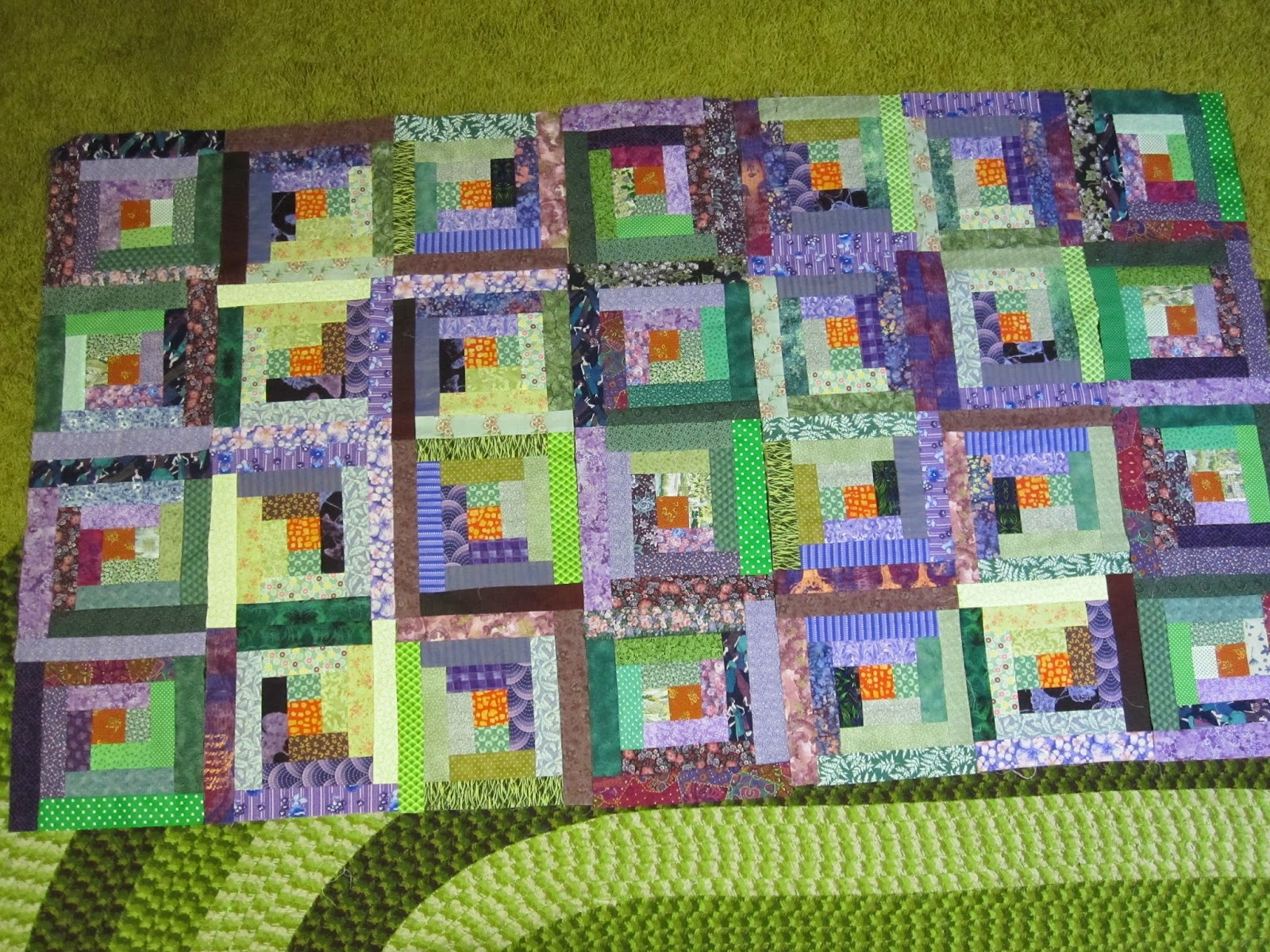 This is sort of where we left off in June/July. If you look at the third row in from the right, you will see that the top two blocks have two of the same fabrics touching. 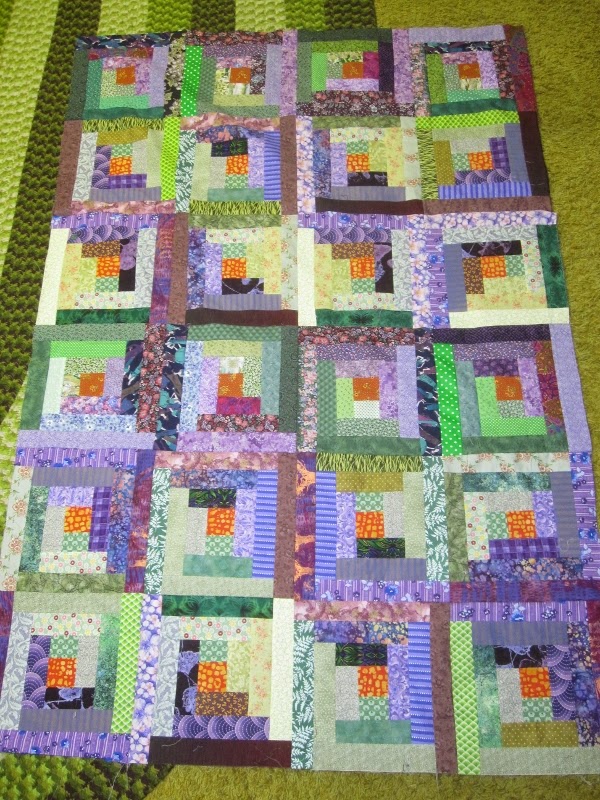 Things got shifted and moved and this was the final layout. 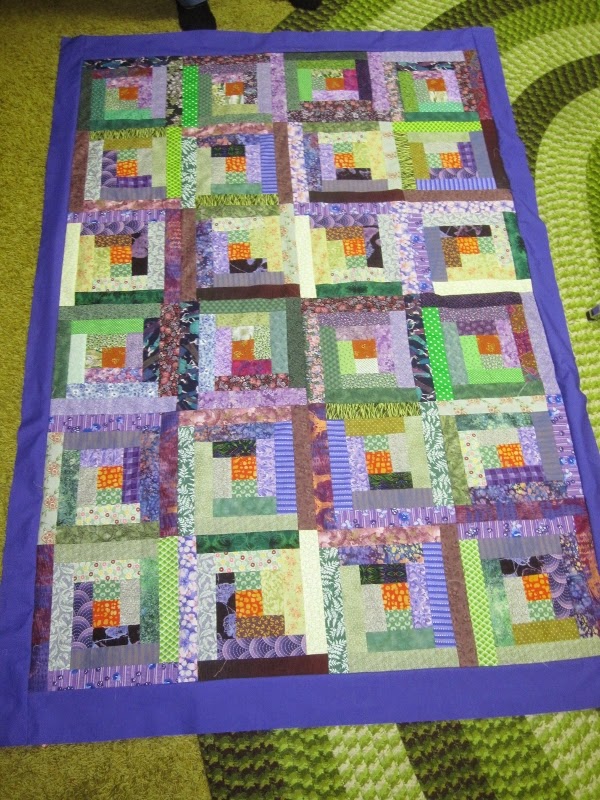 Last night we added the first border. It's wider at the top and bottom since we wanted to add length. We only had a limited amount of this purple and that's why we couldn't make it as wide as we wanted to. 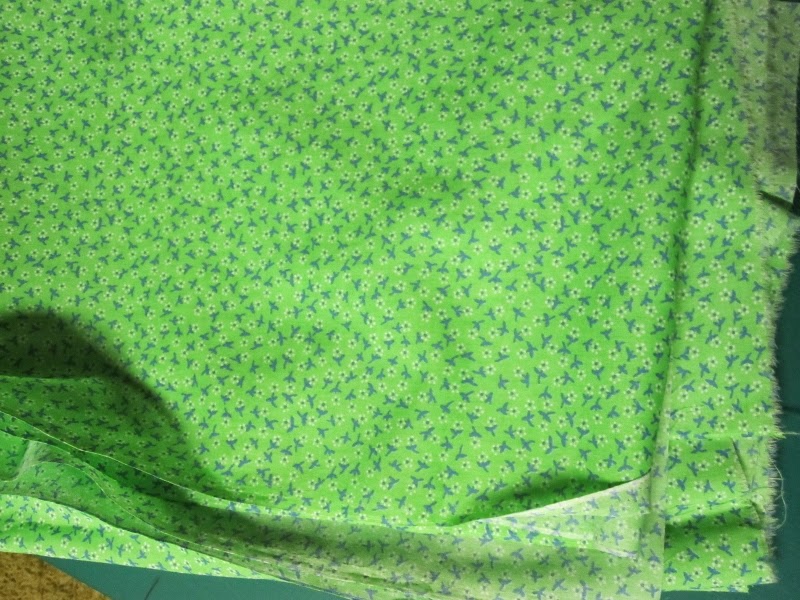 This is the outer border that we settled on last week but now that the first purple border is on, Marg thinks that we should have another purple border instead. She did find a darker purple but there isn't much of it and Ann didn't much like it. This will be given away to a charity and I'm sure someone will love it so I really don't see what all the haggling is about but there you have it. Marg is 87 this month and has all her faculties whereas Ann is 82 and has Alzheimers. She can get feisty at times.

On the home front: 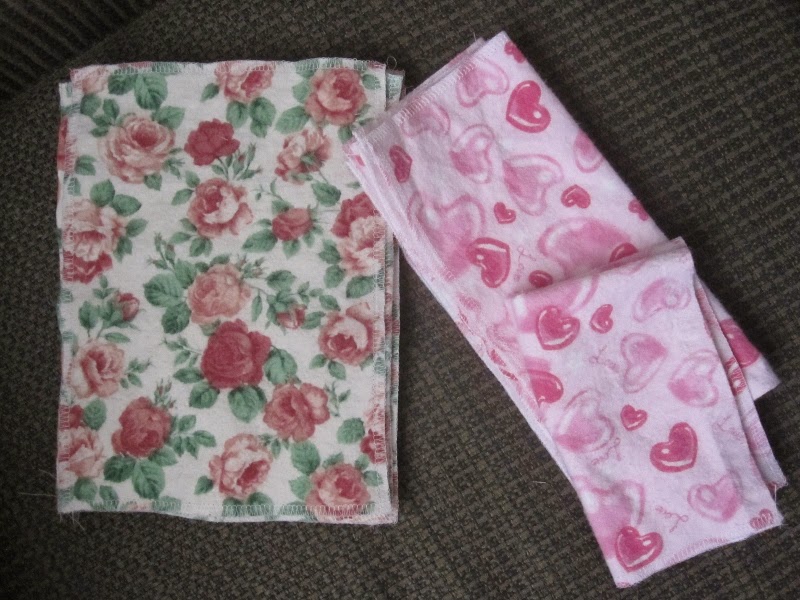 I made some flannel washcloths. My son and daughter-in-law requested them. 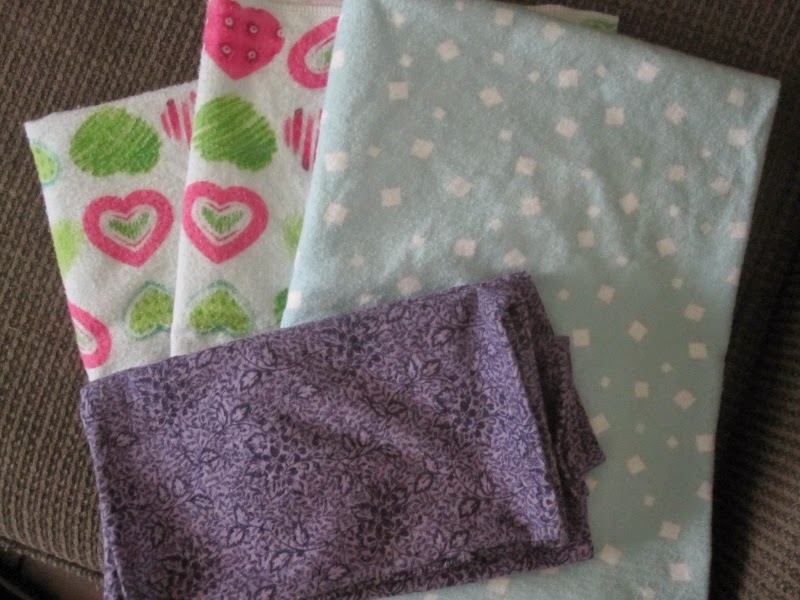 The purple flannel was hemmed to be used as burp cloths and the others are bigger flannel blankets. 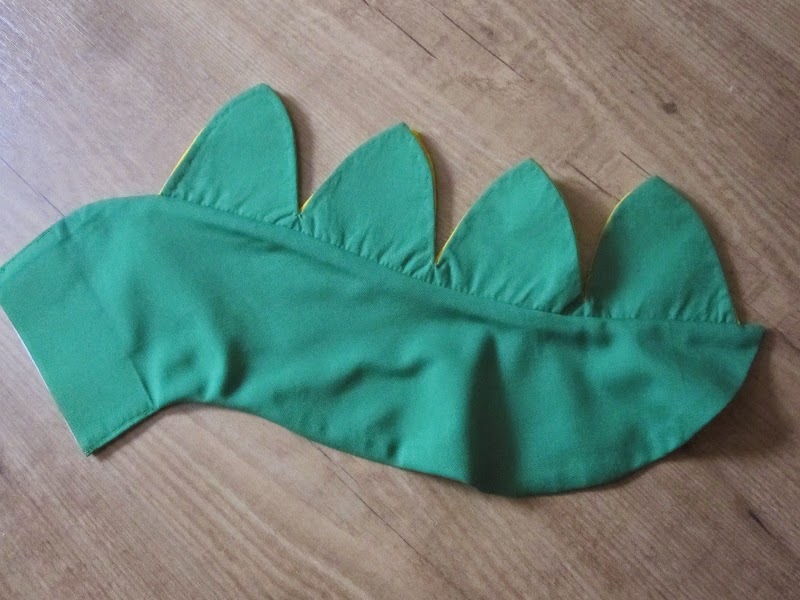 I also sewed up a dinosaur tail for little Luc. 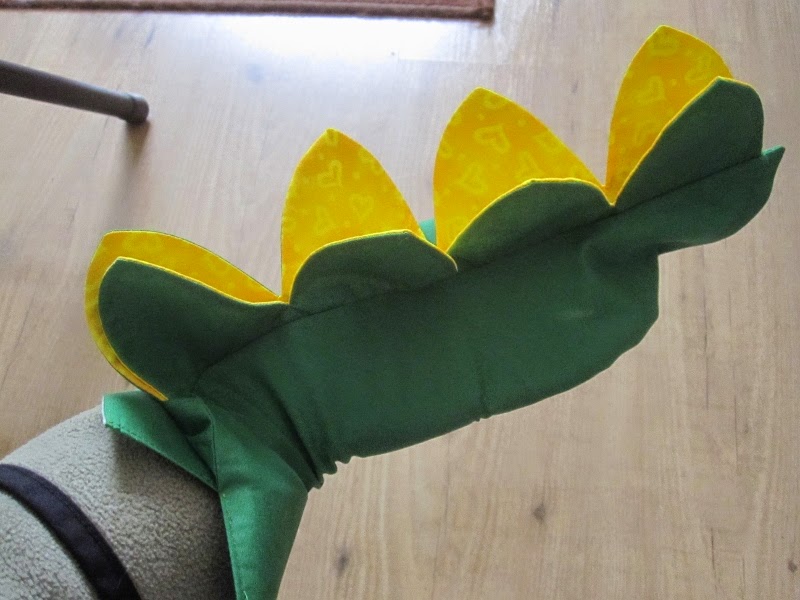 He has the main costume but needed a tail.
Now I have to make a navy blue one for little  Patric.
Posted by Dolores 7 comments:

Kathy Shaw is offering her Crazy Quilt Basic Course once again. It's free but it fills up fast. Go here to sign up.You only have until the 12th of October.
http://www.shawkl.com/


It's a great course and Kathy is such a giving person. If you want to see what I accomplished in the last class, here it is. 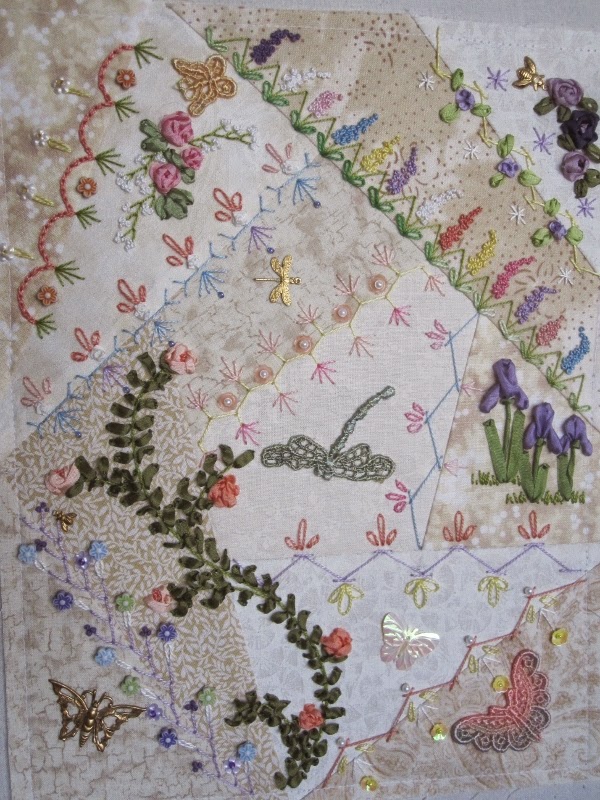 It was a very good learning experience.
I had never worked with silk ribbon and found that it wasn't all that hard.
So, if you have ever wanted to learn crazy quilting, embroidery and silk ribbon, now is the time.
Posted by Dolores 3 comments:

During the summer I had been sort of silent on the blog. It's not because I had nothing to blog about; it's because I had to keep my sewing secret. Since the little girls are here now, I will show you all of the things that I was working on. 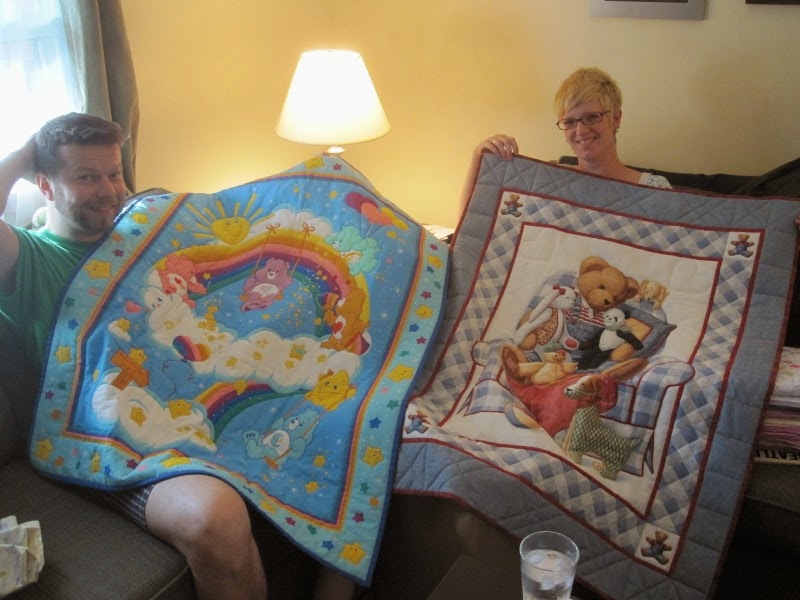 You've seen these as I worked on them but here they are all finished.
The one on the left is a 'Care Bear' panel and believe it or not, the one on the right is... 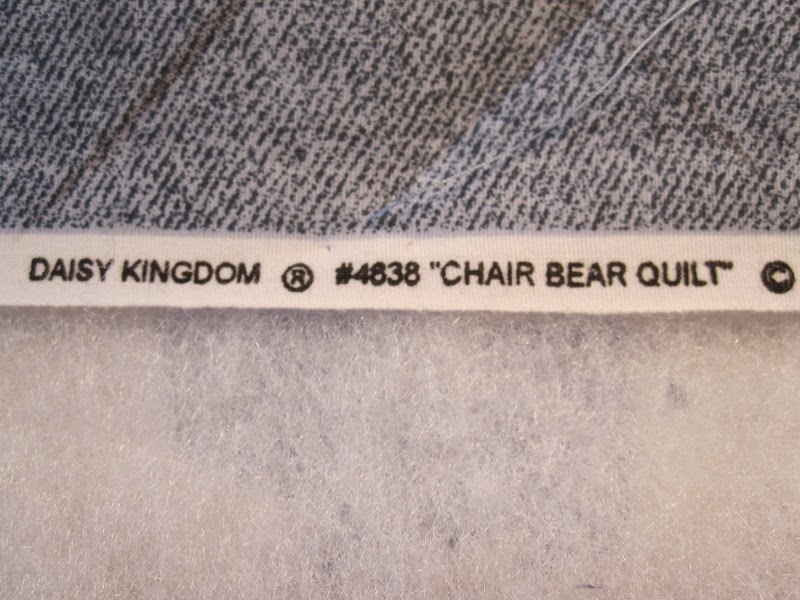 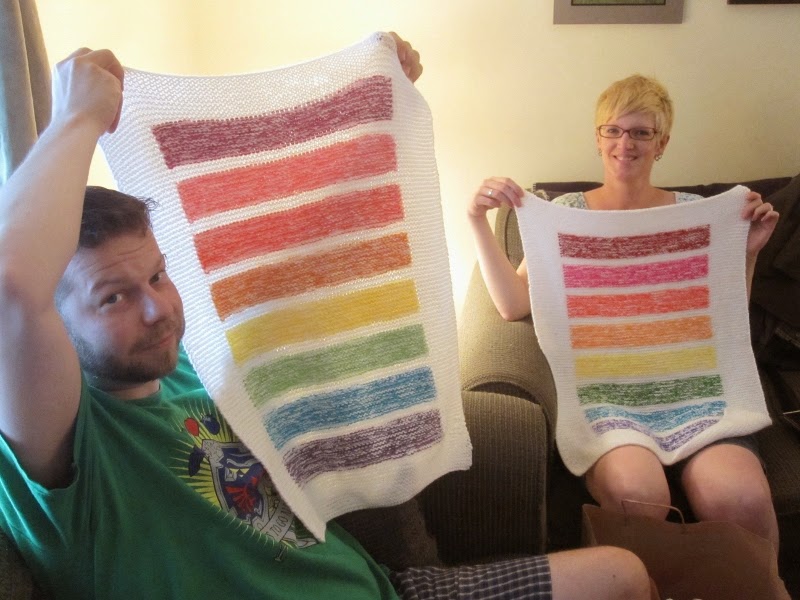 There were two stroller blankets knitted. 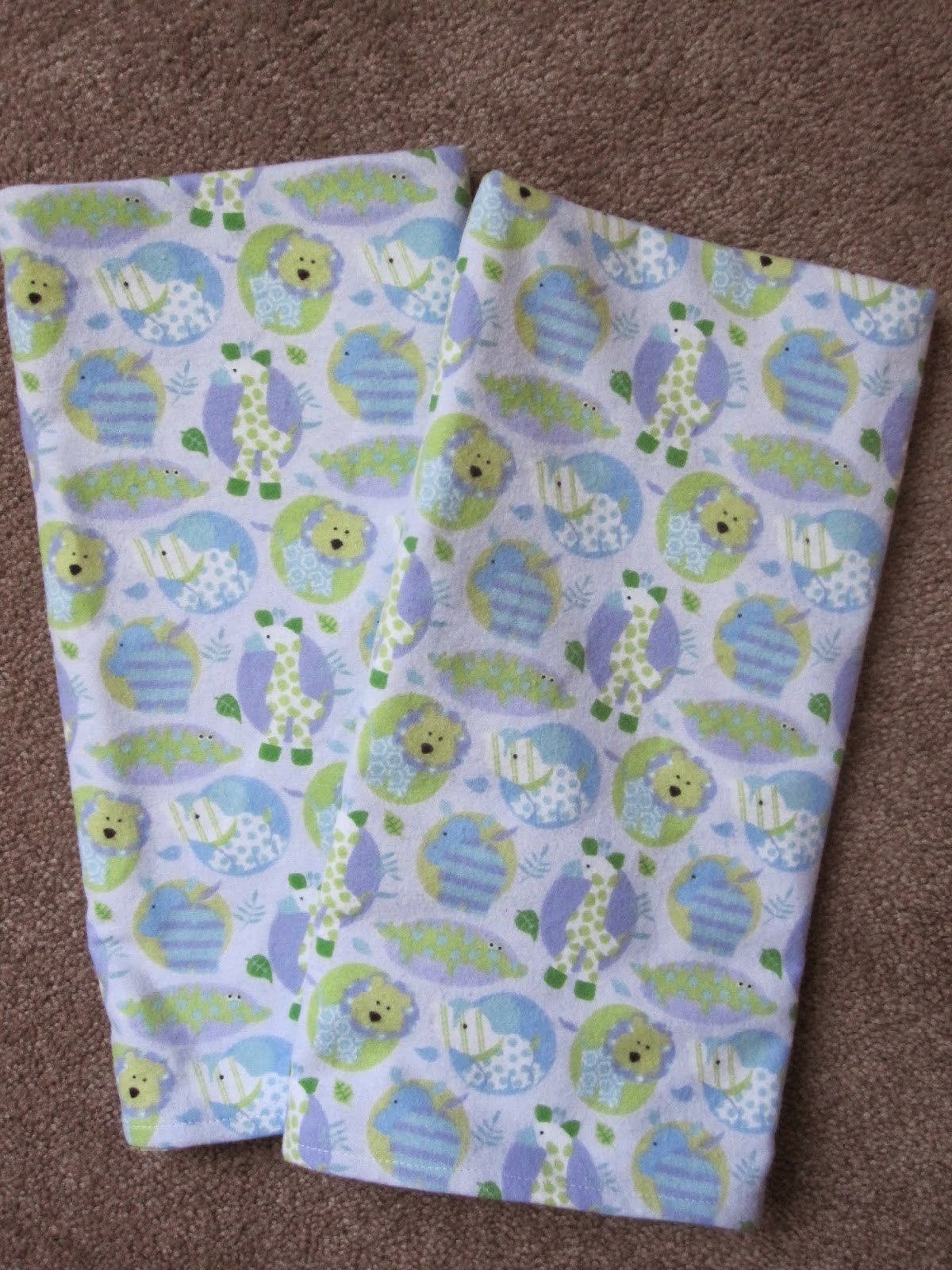 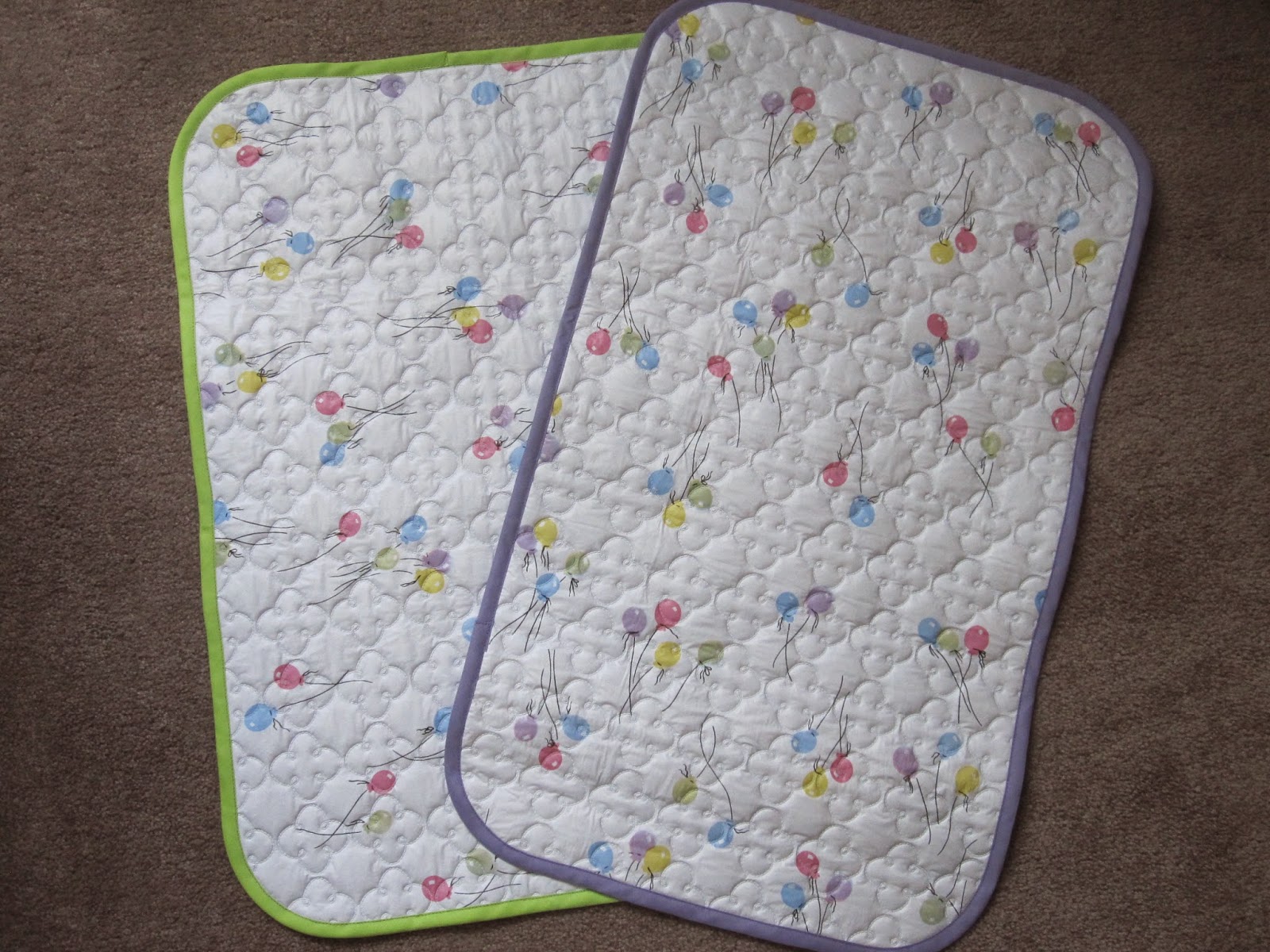 Change pads trimmed in my colour scheme for the twins - green and mauve. 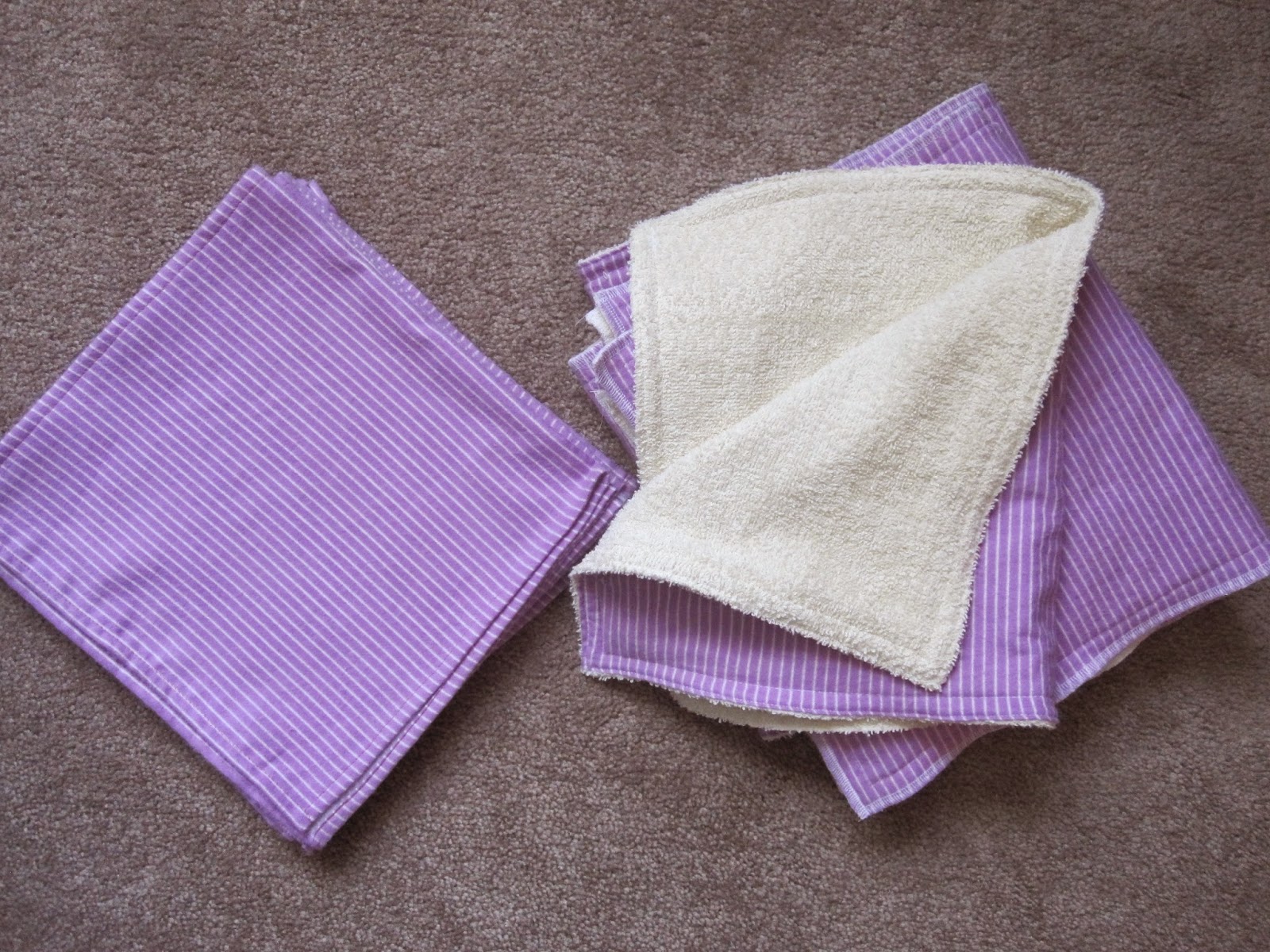 And some burp cloths - otherwise known as spit-up cloths. 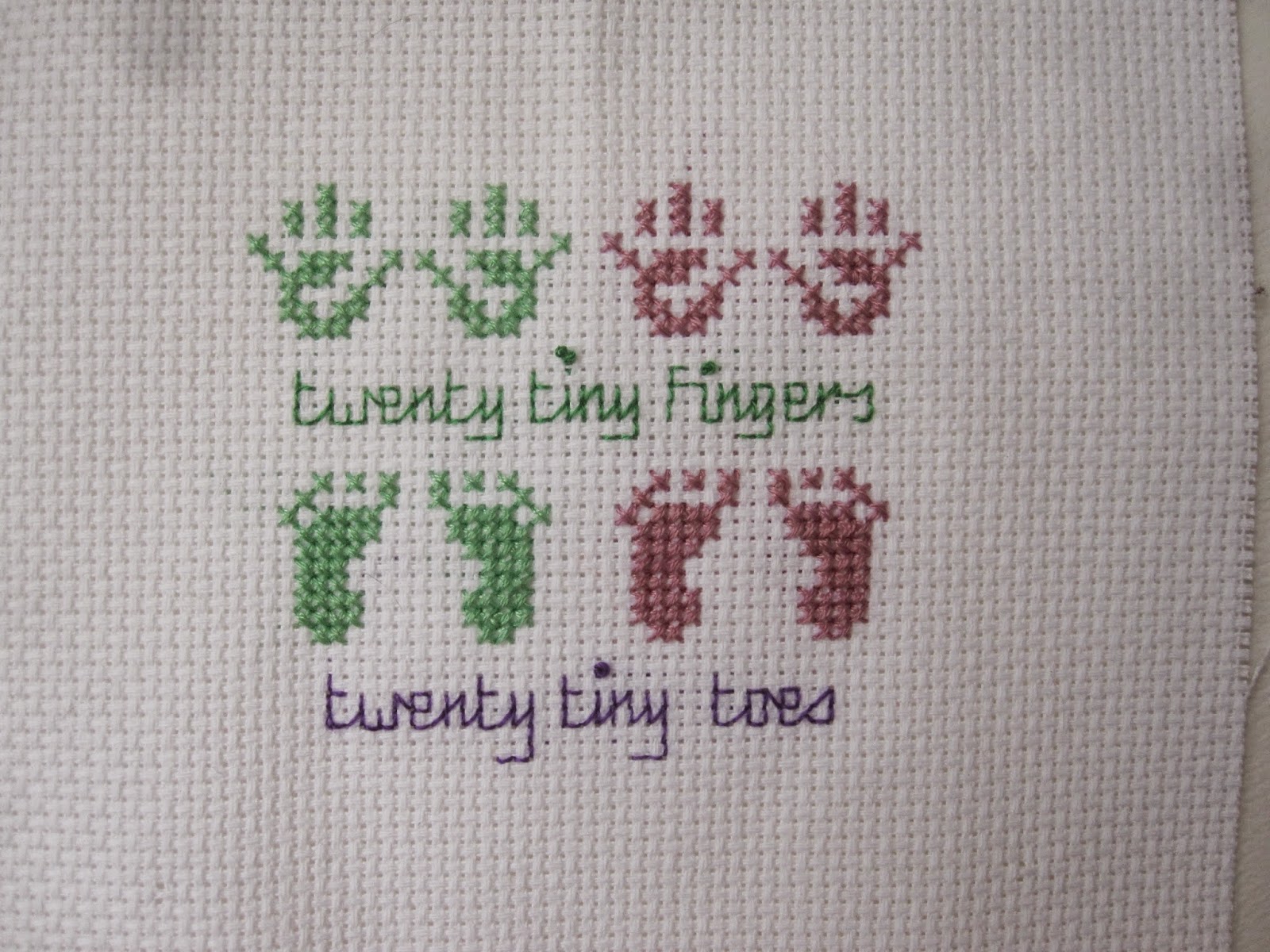 This is the cross stitch I made for the card.
I made cards for my daughter when she had both Luc and Patric. They were both different.

Well, as you can see, I have been busy, busy this past summer.
Posted by Dolores 11 comments:

The Around the World Blog Hop continues today.

Go on over and visit Carli of http://goodearthquilting.blogspot.ca/

Very interesting ladies who do some simply wonderful work. Not your everyday stuff.
Posted by Dolores 1 comment:

And did you know that the largest and longest river system in Canada is the Mackenzie River?

Did you know that the River Severn is the longest river in the United Kingdom? Did you know that here in Canada - actually in Ontario, we have a Severn River, Severn Lake, Severn Township, the Trent-Severn Waterway, Fort Severn and Port Severn?

Why all the Canadian trivia?

Well, last Sunday, the 28th of September, my son Mark and his lovely wife Kate had two little twin girls born to them. Twin A and Twin B as they were known in the hospital but the real names that were picked for them were:

No one stayed in the hospital for long - 48 hours and that was it. Birth weight was 5 lbs. 5 oz. for Mackenzie and 5 lbs. 2 oz. for Severn.
Not bad birth weights for twins born at 37 weeks. Both were, and still are, very healthy.

The family is doing fine and the extended family is overjoyed.
Posted by Dolores 24 comments:

knitting little hats for my charity of choice, the Silent Children's Mission. 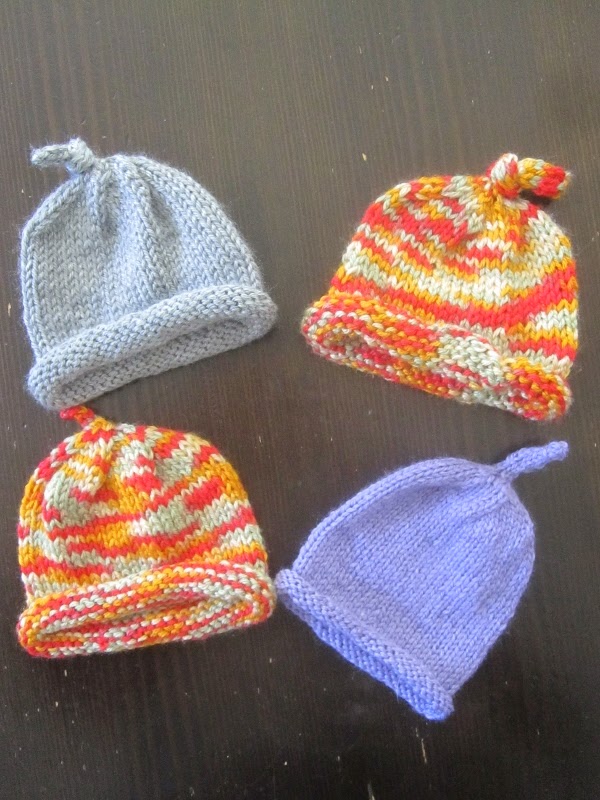 I bought the variegated yarn in British Columbia and I have a wee bit left for one or two more hats. 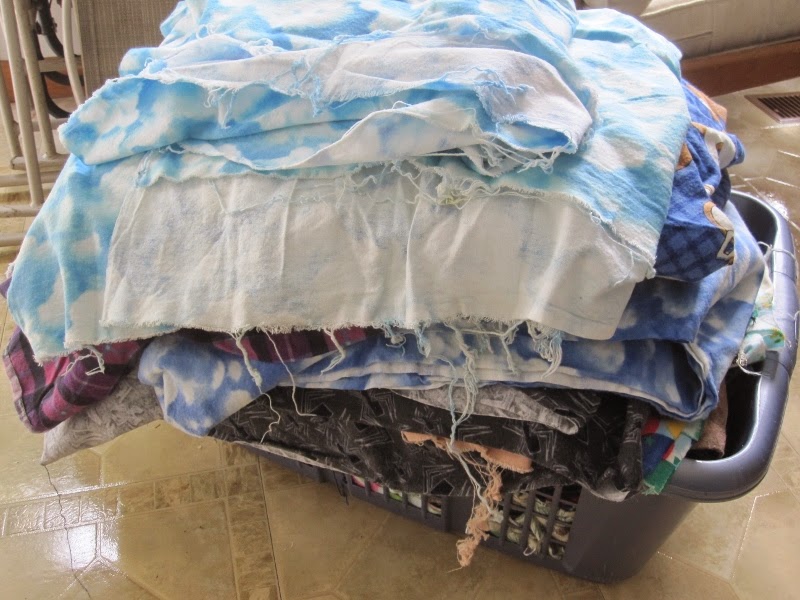 This is the laundry basket full of flannels that I found in my sewing room. Kinda hard to miss, eh? Well, stuff was piled on top and when I unearthed it, I was a bit surprised. Going through the pile was a lot of fun. I found some novelty flannels that I incorporated in Patric's rag quilt.
It's amazing what you find when you're looking for something else. Beside this laundry basket is another one and when I took stuff off the top of it, I found patterns. I haven't gone through them yet.
I'm still looking for binding fabric for my youngest daughter's quilt but I really do think I have to go out and buy some brown. BTW, my sewing room is only about the size of a small bedroom - 8' X 10'. My family wonders why I have branched out into another bedroom (or two) to hold my back-up sewing machine and knitting yarns...
Posted by Dolores 6 comments: