it just doesn't pay to rush...

I thought I would try out the sizing of the little t-shirt. I have quite a few pieces of knit fabrics.

I thought I would use my serger and did one sleeve fine. I left it because I had to answer the door and when I came back to it, I serged the other sleeve. Except I didn't double check to see how I was sewing it and so I sewed it incorrectly. Luckily, I have a couple of metres of this knit fabric and I didn't stress over it.

I re-cut the pieces and re-sewed the shirt today on my Kenmore using a knit stitch. It worked fine and now it's done. Since hems always tend to stretch when sewn, I interfaced the hems with some lightweight knit type of fusible interfacing. Now I want to make the shirt with the button front. I made several for both my boys when they were small. As a matter of fact, I am still sewing shirts for one of my sons - Mark. Eric, whose birthday it is today, (Happy 29th Birthday) prefers store bought shirts.
Posted by Dolores 7 comments:

Just a few photos in the life of Luc. 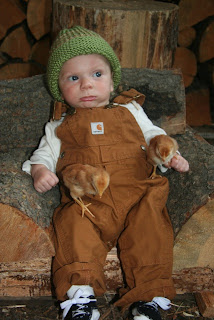 I don't think little Luc aka farmer Luc is impressed sitting on his log throne. 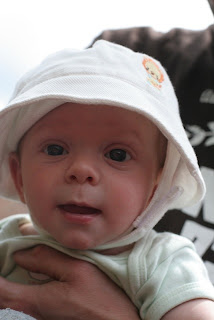 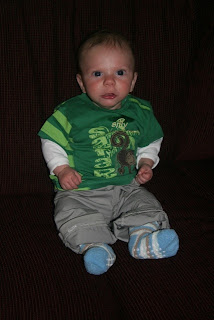 proud Grandma (Mummi) thinks he is a cutie.
Posted by Dolores 10 comments:

A bit of fabric, a chocolate wrapper and some paint dabbed onto Q-tips. The little nest.
Posted by Dolores 7 comments:

Books: a written or printed work of fiction or nonfiction, usually on sheets of paper fastened or bound together within covers. 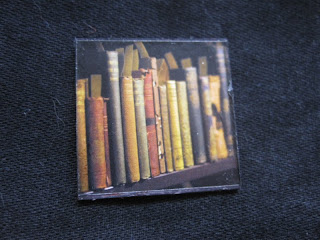 I like this image of old books. They look well used and loved with little place markings sticking up from them.
Posted by Dolores 10 comments:

A fellow blogger, Kay, had a tutorial for what she called a Potato Chip quilt. It was an interesting concept and so I decided to try it out. As stated in my previous post, it needed 38 strips but I got carried away and cut 39. The interesting part about the whole process is that you don't know how it's going to end up looking. 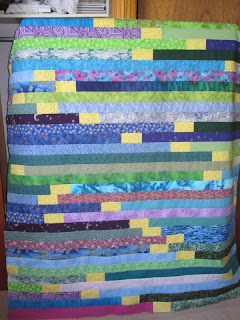 I started sewing these strips together last night and now it's all done and ironed. It measures 57" X 64".
Out of my head and now, on to other things.
Posted by Dolores 7 comments:

Every once in a while one takes a detour. I should be working on something else but I had already cut 10 pieces which were in a see-through plastic bag. I started out just wanting to add one or two strips. That led to a few more strips and before I knew it, I had to cut the amount required - 38 strips - but I got carried away and there are 39 different fabrics here - not counting the accent. 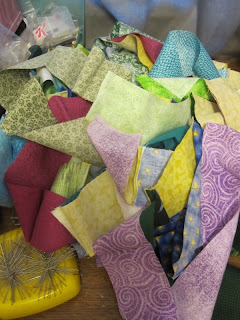 This is a pile of 2 1/2 inch lengths of fabrics. Mainly blue, green and purple with the yellow as an accent. When it's all put together, I'll post a photo of it.
Posted by Dolores 2 comments:

It feels so good to have finished a project completely. 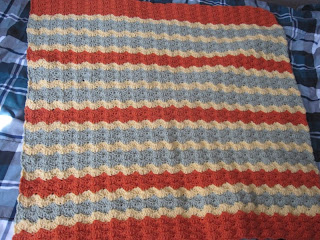 All the little ends have been woven in and I have thrown out the very small little pieces of yarn that was left. The reason there is only one green stripe in the pattern instead of two is because I was short of yarn and I so I used up what I had on hand. The orange is short by two rows also but you will never realize it unless you look for it. 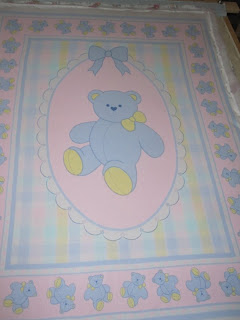 And this pre-printed baby panel I showed earlier, stretched on the frame, became... 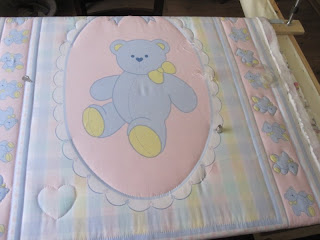 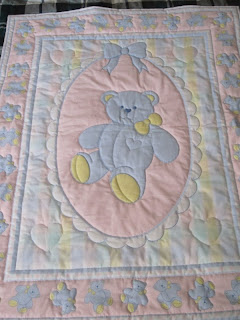 this little quilt all done. It even has a label. My friend Marg always said that it's not a quilt until it's quilted.
I will pack it away until closer to the baby's due date which is in November.
I have begun other things. I started knitting a baby pullover because I wanted to do some hand work now that I finished the crocheting. While cleaning up a hat/mitten/scarf cupboard, I came across some yarn packages I purchased a long time ago. Canadians will understand when I say that the yarn is Lady Fair which was an Eaton's store brand. 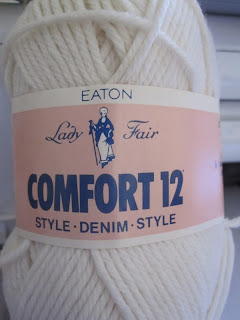 The Eaton's chain, which opened in 1869, closed down in 1999 and I know for a fact that I bought the yarn quite a bit before then.   http://en.wikipedia.org/wiki/Eaton%27s
If you take a look at the wikipedia site and scroll down, you will see a gorgeous big house that was purchased through the Eaton's Catalogue and sent as a kit. I loved going to Eaton's and especially Eaton's bargain store (Eaton's Annex - thanks Cathi) which was located behind the original store in Toronto. There was a basement walkway from the main store to the Annex and, even though it always seemed hot down there, they sold ice cream and hot dogs. The other reason I liked the Annex  was because it had the really, really old escalator. It was only wide enough for one person to stand on. I remember one time I had on my ratty old running shoes that I had painted and part of one shoe got caught as I was about to leave. I managed to retrieve it and my foot but one of the salesladies said that I should report it and get a new pair. I didn't want a new pair and was way too shy to make a ruckus of the fact that I actually walked around with torn running shoes so the fault was partly mine. Eventually, both Eaton's and Simpson's (another big department store chain located across the street from Eaton's) got rid of all their fabric, needlepoint and yarn. That really was sad.
Well, I'm off to work on other things. Have a great week. We are stuck in heat and humidity but I do love central air.
Posted by Dolores 8 comments:

Love: a feeling of warm personal attachment or deep affection, as for a parent, child, or friend. 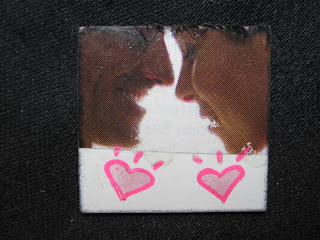 Another quilt for little Luc

I made this quilt first for my little grandchild - still not knowing if it was going to be a boy or a girl. 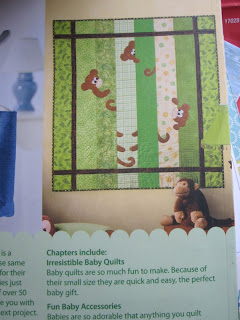 I saw it in a book that I borrowed from the library called Quilting for Baby. This is the back cover of the book. 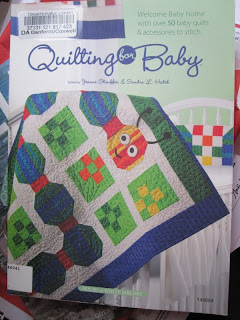 I liked the one on the cover too - after I looked at it over and over again but the one that really caught my eye was this. I may make the cover quilt later. 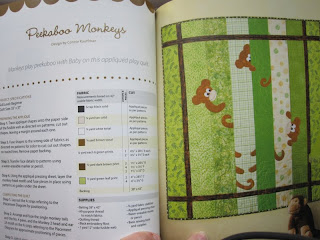 I don't know what it was that made me like this quilt enough to make it. Maybe it was the fact that I had loads of greens in my stash or maybe it was that those monkeys were just so darn cute. I didn't have much brown in my stash so I had an excuse to shop for some fabric - not much. 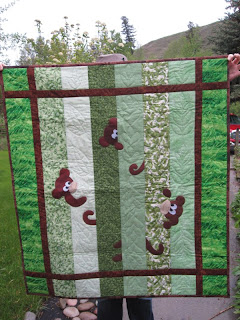 Here's my version and this photo shows up the quilting. I hand quilted different leaf motifs on each strip. I changed the pattern a bit and didn't put as many feet in it as the pattern indicated. It has a flat cotton batt and I absolutely will not use it for hand quilting again. It was a pain to use because I could not get my stitches as small as I wanted them. 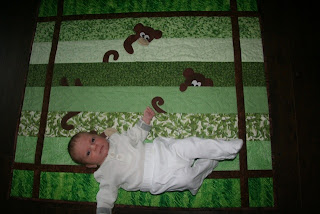 And here's the little recipient. Everyone who saw the quilt on the frame loved it. I think little Luc's theme will be monkeys since he received other monkey items.
Posted by Dolores 15 comments:

Sweet: having the taste or flavor characteristic of sugar, honey, etc. 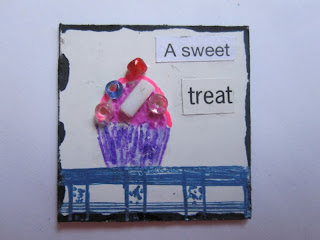 Sometimes I get a craving for a small cupcake with lots of icing.
Posted by Dolores 9 comments:

A Quilt for Luc

This is one of the quilts I made for my new grandson Luc. 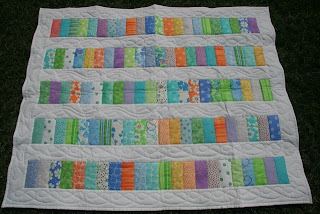 I used part of a charm pack of Dilly Dally by Me and My Sister Designs. I took out the ones that had black and pink since I don't like black for a baby quilt and I didn't know if it was going to be a boy or a girl. I added yellow, mauve and some of my own light blue fabrics. The turquoise was a neutral colour and I thought the whole quilt was nice and bright. 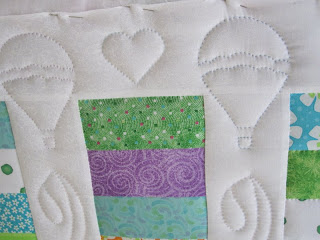 The pattern is from Moda and it's called Stacked Coins Baby Quilt. Click on the photo to see the quilting. It is hand quilted and I used a variety of patterns in the white. 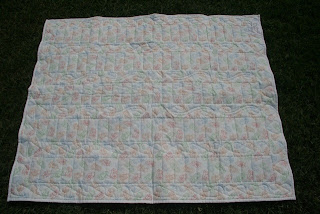 This is the back. I like my backs to be all one fabric because it is hand quilted. That way you don't have to quilt through seams. The batting is polyester and that's what gives it the loft. 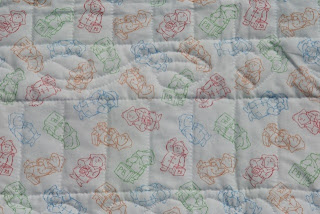 Here's a close-up of the backing fabric - it is multi-coloured Paddington Bears. My daughter was pleased. I purposely looked for something that wouldn't show through on the white and this was a perfect choice. I wash all of my fabrics before I put it together but even though I didn't wash the charm pack, I still didn't wash the quilt when I was finished. I don't like the wrinkly look for a quilt that is brand new. 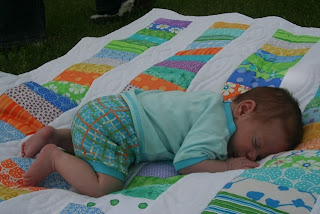 And here's little Luc on his quilt wearing what turned out to be a matching outfit which was a gift from a neighbour.
Posted by Dolores 12 comments: