The theme for this year's Row by Row was "Taste the experience." I was late in getting my top done and then I was late in getting it quilted. Once I saw the blocks that the quilt shops offered, I noticed that there were a lot of blocks that were 18 inches square. Once I thought about a quilt, I decided to just use the 18 inch block size totally. After some more thinking, I realized that since I hadn't yet made a shadow block quilt, I could very easily do one now. There weren't many winners this year. I think a lot of people weren't too keen on the idea of a quilt that was food based. I didn't care because I figured it could very well be used as a lap quilt to keep someone warm. 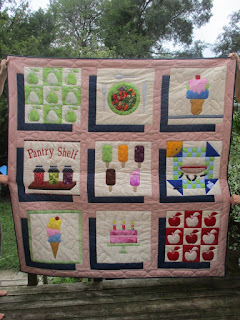 Here's my finished quilt. I bought no fabric because all of it came from my stash.

Some close-ups of the blocks I used. 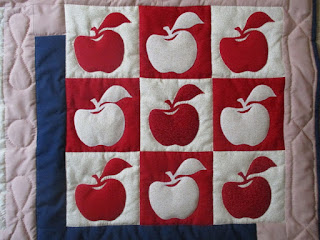 This block was from Thimbles and Things in Orillia. I think I used up one of my red fabrics. 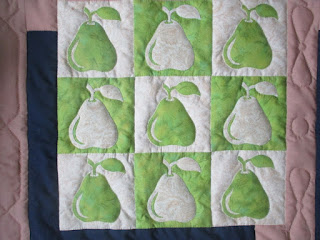 There were four quilt shops offering a version of this pattern. I didn't venture out to get the peach or the plum. This pattern came from Threads That Bind in Maxwell. For some reason, the four quilt shops offered this pattern as a 12 inch by 18 inch square. They did indicate that one could make a placemat from the pattern but none of the shops mentioned that the pattern actually should have been an 18 inch square. I just added an extra row. 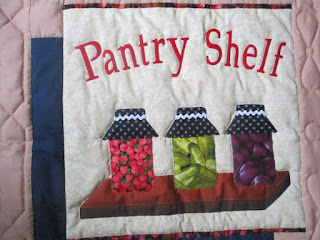 This one was a hit with my middle daughter and also my son-in-law's grandmother. I had won the pickle fabric and the raspberries in a previous row by row. The plum fabric was a remnant I picked up in my travels to collect the row patterns. The Pantry Shelf was offered at Feathering Quilt Shop in Dundas, Ontario. 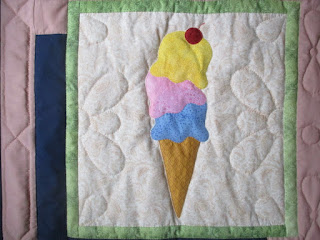 There were a lot of ice cream themed blocks. This one came from a Len's Mill Store in London, Ontario. 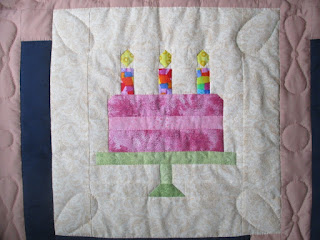 A cute birthday cake. The green fabric in the cake stand came directly from my scrap pile. The pieces were cut from odd lengths. The same fabric is in the block above. I don't know if there are any pieces left. I doubt it. Len's Mill Store in Waterloo is where I picked up the pattern. 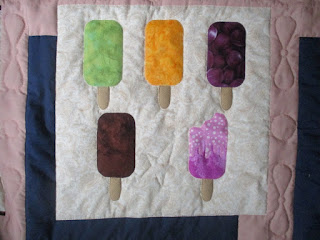 I liked this pattern. It was simple but there was just something about it that appealed to me. It came from another Len's Mill Store - this time from Cambridge. They had moved since I was last there. Luckily, there were addresses to all the shops and with GPS, we didn't get lost. 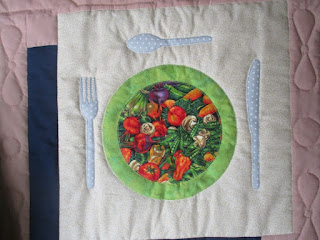 Country Concessions in Cookstown came up with this block. Their version had a cupcake in the middle with the words "Eat dessert first." In my version, I decided to call it "eat your vegetables." I just happened to have that veggie fabric lying around and thought it was perfect. I don't know if you've noticed but my colour palette has included quite a bit of lime green. I thought I would stick with the same colours throughout so that my quilt didn't look too scrappy. 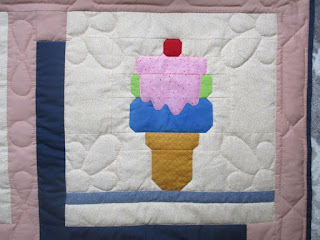 This ice cream cone version came from Quilter's Nine Patch in Elmira, Ontario. That pink ice cream drip was supposed to be a 3D flap but since I knew I was going to be hand quilting it, I just appliqued it on. Making it as a separate flap was too much work. You can see some of my quilting designs. I just used a couple of stencils and mainly just parts of them - not the total design. 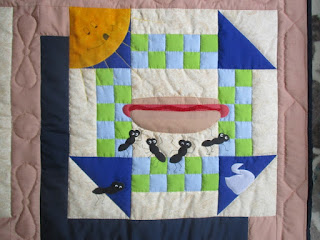 I thought that quite a bit of work went into designing this one from Ye Olde Fabric Shoppe in Stratford, Ontario. That's where I brought in my winning quilt. While making the ants, I thought I could use a white gel pen but after going to a local art supply shop, the young lady there told me that it would wash out when I told her why I wanted a white pen. She then showed me two paint pens/markers that could be used on fabric and would be permanent once they were ironed. I was allowed to try them both out and I settled for a Uni Posca marker. I like how the ants turned out. 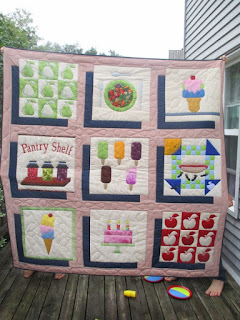 Now you can see what has been keeping me busy these summer months.

Oh yes, I also went to England in June for two weeks to visit my youngest daughter and her family. The day after I came home, my 10th grandchild (little Aurora) was born on Father's Day. Then my eldest and youngest daughters visited in the beginning of July with their families to see the latest addition to our growing family. After checking our schedule for the summer, my husband and I decided that we could go to British Columbia with our eldest daughter and her two boys to help with harvesting some of their summer garden produce. Her husband was out of town finishing up his schooling. Once we came home, we looked after some of our grandchildren while they were on summer holiday.

So I did manage to get this quilt done and now I'm trying to finish up a few other things.
Posted by Dolores 2 comments: 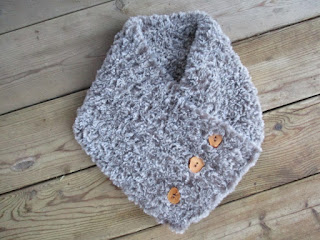 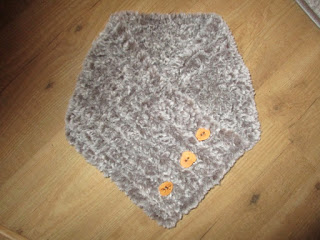 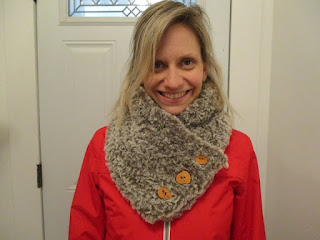