On New Year's Day there was a one day quilt along called Merry Mayhem Mystery. After I looked at the requirements, I realized that it needed only four fabrics and that you could make it in the size that you wanted and felt would work best for you. Since I have a lot of fabric in my stash, I was hoping to use some of it up. Each colour needed less than one yard/metre of fabric and so I chose my four fabrics and waited until the last clue was released. Then I got to work and started the quilt. I wanted a new quilt on one of the twin beds in the bedroom that the grandchildren use when they visit. 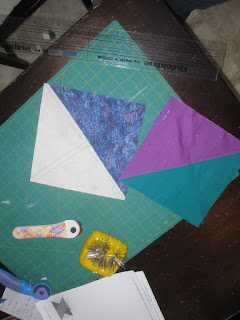 These were my four chosen colours. 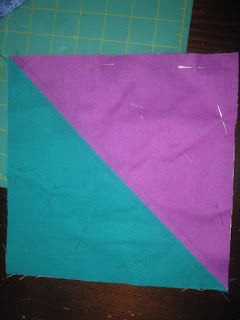 Sometimes it pays to wait and in this case, the instructions were a bit off so I saved myself some figuring out. 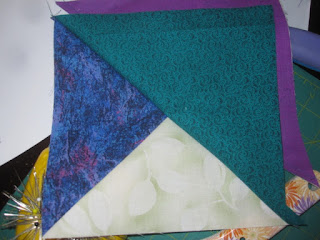 There was some cutting, some sewing and then more cutting. 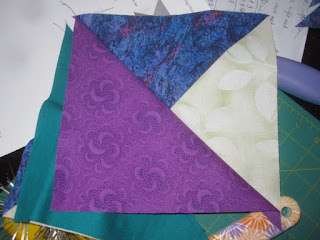 Of course, the iron was put to work too. 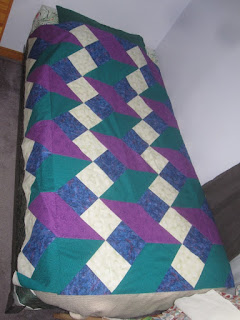 Here's the finished top laying on one of the beds. 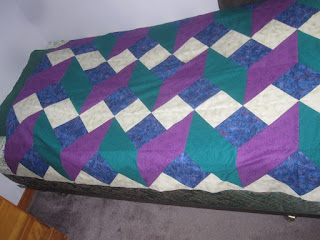 I have enough of the fabrics that I could add borders to make it a tad bigger. I finished this just today and now it's folded up and in the closet waiting to be worked on when I have more time to devote to it.
I don't usually do well on quilt alongs. Something usually happens in my life and I end up having to get other things done.

Now I have to cut and prepare some background pieces for another quilt. I'm also knitting another headband with reflective yarn. I just hope there's enough yarn left in the ball.
Posted by Dolores 4 comments:

Forgive me, that was a throw back to a tea commercial.

Anyway, Sew Sisters quilt shop has free shipping in Canada from now until January 7th. It saves postage, wear and tear on your vehicle, gas... You get the picture.

Hop on over. I have no affiliation to the store at all. I am just letting my Canuck followers know that they can shop postage free.

Here's some random photos of fabric (not what's on offer at Sew Sisters.) 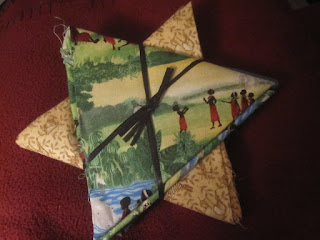 I don't know where this came from. 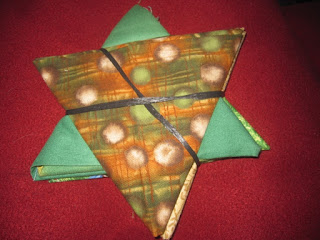 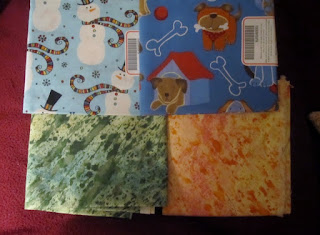 Older fabrics from a friend. I guess I should us the doggy one in a child's quilt. 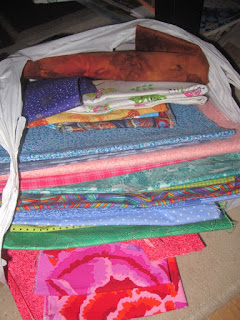 See? Lots of fabric in my stash so I don't think I'll be purchasing anything. However, there was a really nice bundle...

Enjoy! Maybe you will find something that you can use in one of the BOMs that I listed in the previous post.
Posted by Dolores 3 comments:

Blocks of the Month

Quite a few of us eagerly wait for January and the beginning of a Block of the Month program. There are several out there. Here's a few I have come across and feel free to check them out. It's one way to use up your stash.

Oh, and by the way, these are BOMs with no charge. Most are free for the whole month and then, if you missed that month and want to catch up, you can pay for the block. 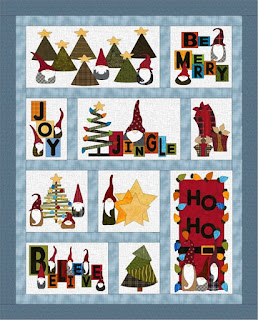 This is a Fat Cat pattern called Gnome for the Holidays.
You can get it here. The first block will be posted in February but the fabric requirements have been posted already.

It's a "Wild" Life BOM has various quilters designing a block for their designated month. 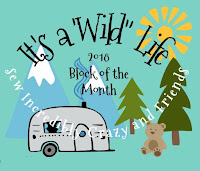 You can find the list of participating designers here. This too starts in February.

Kat, of Next Step Quilt Designs has an interesting star-themed quilt.

Sew Can She had a year of mini quilts in 2017. You can still get the patterns (that's where the link will lead you to) and Caroline had so much fun, she is  doing it again for 2018. This too will have different designers for each month.

Edit: I forgot to add, if you are into a lot of hand stitching, Jenny of ELEFANTZ has a year long embroidery BOM.

OK, I was going to tell you about the colourful bears but here's a link where you can find even more Blocks of the Month.

HAVE FUN!!
Posted by Dolores 2 comments: