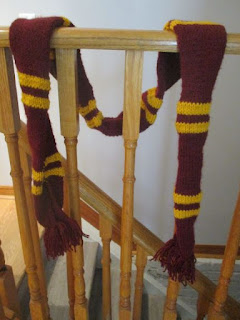 I finished this Harry Potter scarf for my eldest grandson. I purchased the yarn at Poundland in England (similar to our Dollarama.) I started it in England and just finished the fringe last week. I added fringe because the ends curled up. I will block it before sending it to see if that would help with the curling inwards of the whole scarf. 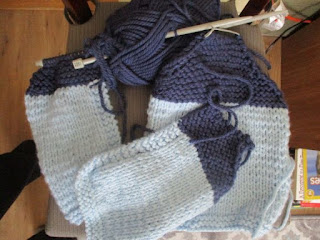 This is a baby sweater that has been unfinished for a while now and I thought it could be my next knitting project but... 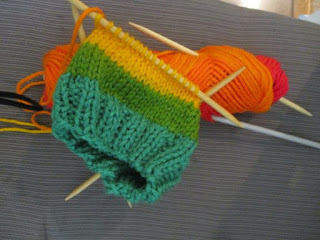 I started (and now finished) this little rainbow baby hat. It was supposed to be a newborn to 3-month size but it turned out bigger. I shall try another pattern. There is a charity on Facebook called Warm Baby Project and it's based in England. They supply knitted garments to hospitals and other places that need them. I have learned a few things while following the site: some hospitals have different coloured hats for the babies in need. They are called traffic light hats because they are either green, yellow or red depending on the level of care the little ones need. It's easy to see in a hurry. Also, rainbow hats and blankets are given to newborns whose families have previously suffered a miscarriage, still born birth or have otherwise lost a baby. 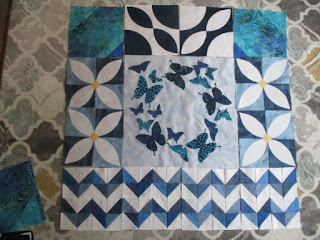 And this is my current sewing project. It's the Quilters Trek - previously known as Row by Row. I wasn't going to participate this year but the theme was True Blue so how could I pass it up? I'm almost finished the rows, or blocks and then I have to put it all together. Lots and lots of work but I love blue so it's been fun.
Posted by Dolores 5 comments:

I have several grandchildren who are of the age that they will have to wear a mask either in a store or dentist/doctor's office. I made some for my daughter and her family in British Columbia and sent them off using the post office's 2 to 3 business day option. Well, they were in the mail by Saturday and they didn't arrive until Thursday or Friday. One of my 3 year old granddaughters had a little trim at the hairdressers and her mom thought it would be a good idea to make her a mask. I did have a pattern that was the same as the adult pattern but it was for a child aged 3 to 6. I picked out a few fabrics and had her choose which one she wanted. 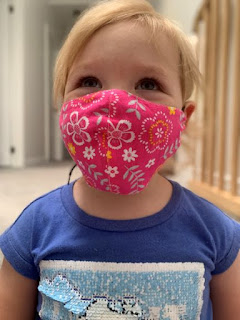 This is Wren and her new mask. 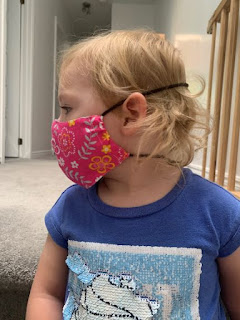 She liked the pink fabric even though some of the other fabrics had animal characters on them. The lining has monkeys on it. One of my other granddaughters left her mask at the dentist office so I made her a new one and then I made her twin sister one. Their little 3 year old sister got a new one too.

I thought I was finished with mask making but I think I'll be making a few more. Some can stay here as extras in case someone needs a mask because it's in the wash or they forgot theirs or they lost it.
Posted by Dolores 4 comments: