Bargello with a story

This bargello quilt was made for two reasons. The first reason was that the York Heritage Quilters' Guild was having a quilt show. This was in 2006. I had no new quilts on the go and needed inspiration. That was the year that my daughter Maili's boyfriend, Casey, decided that he would enter the AIDS Lifecycle 5 which is a 7-day bike ride from San Francisco to Los Angeles. The bike tour includes up to 2,500 bicyclist and more than 500 support crew participants who cycle or crew to raise funds for services and awareness of HIV/AIDS. I have no idea how I came up with the idea of a bargello quilt but here it is. The colours, of course, represent the water (blue), sand (gold), road (white and grey), and of course the trees (brown and green). 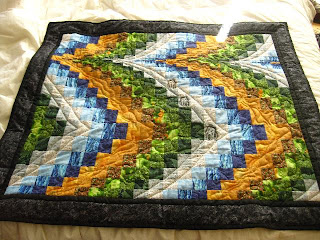 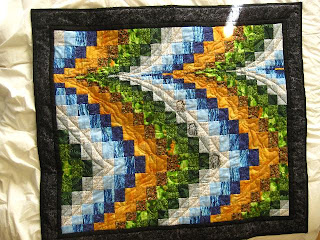 I actually made the quilt sideways. After sewing all the pieces together, I turned the whole quilt on it's side so that it was in the position you see here. I stencilled the bike riders on it. It was finished and quilted in time for the show. There was no set plan for the quilting and so I just went with the flow and put in what I thought it needed in each of the colours.
Casey received the quilt just after Christmas that year when Maili brought it to him after her visit home for the holidays. I do believe the label reads "From San Fran to LA."

Note: the AIDS Lifecycle bike tour is an annual event that takes place in late May or early June and earlier this year Casey did it again. This time Maili took part as one of the roadies.
For more info: http://www.aidslifecycle.org/
Posted by Dolores 8 comments:

One of the online yahoo groups I belong to is called Learning Fibre Arts or learningfa. One of the women who belongs to the group, Miriam, from Ireland, lost her daughter to cancer a couple of years ago. In order to cope while her daughter battled this disease, Miriam spent hours in her sewing room just cutting fabric. She made this tree in her daughter's honour after she lost her battle with breast cancer. Emma left behind two small daughters of her own.

It is not finished as you can see. It needs a tree trunk and then it needs batting and the backing. I think I may embellish it before I put it together.

I won a giveaway at Carol's blog. She is a Scot in Tennessee. She had several giveaways at the end of October. I love the book and have tried to decide which one I want to do first. None of them are very big and so they are quite doable. Aren't those fabrics great - sewing related - and that little square ruler will be coming in very handy. Thank you Carol.

Well, I knew it was coming since Sandra, my Stitcher's Angel emailed me to let me know that she had posted it. Today, I got the parcel (from Italy) and couldn't wait to open it. I did hesitate for a few hours because I debated with myself as to whether or not to wait until I got my own camera back. I had loaned it to my eldest son Mark so he could take pictures at his Hallowe'en party. I knew my daughter had a camera but it was with her at work. This is her picture. She kindly took several shots for me - and yes, I did open it instead of waiting longer.
As you can see, there are a couple of pieces of fabric, one light and one dark (both with roses on them), a heart-shaped box with a beautifully cross-stitched lid (with a rose on it), a wonderful pincushion that I can hang up that is in the shape of a dress with a beaded necklace and an apron (quite imaginative - I love it because I have been sewing my own clothes since I was a teen) and then, in the box, I found this bracelet. I have collected bracelets since I was very young and Sandra makes jewellery besides stitching. The little charms are Russian dolls. Click on the photo to get a close-up or better still, go visit Sandra's blog and see a better pic http://guazzcrocette.blogspot.com/2009/10/im-stichers-angel.html

Thank you so very much Sandra. You are an angel.
Posted by Dolores 11 comments: