It's actually Thanksgiving weekend here in Canada and right now it is more like summer - not fall. The weather has been simply gorgeous with temperatures in the mid 20s for the past few days. Today it got up to 23 and tomorrow it's supposed to be 27. Thanksgiving Monday is predicted to be around 26.


I have not been idle - I have been busy in the sewing studio. My middle daughter went to see her only nephew, little Luc, and she brought a few things with her. Luc's mom asked me if I wanted to have some fun and make him a costume for Hallowe'en. It seems that the neighbours are expecting him to be trick or treating on the 31st. At first it was to be Superman but then she said I could make a Flash, a Green Lantern or a Superman costume. Well, off I went to check the pattern company offerings online. I didn't even know that they made costumes starting at 1/2 size and going up from there. I decided to go with Simplicity 2506 and I used the little mouse version minus the ears, bow tie and belly. I chose to make Flash since he is mainly all one colour - red. I purchased some nice arctic fleece so that little Luc would be warm and also so that the one piece outfit could be used after Hallowe'en. 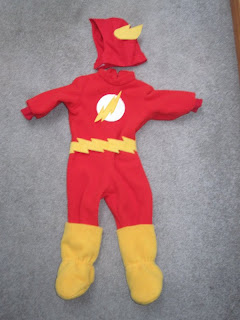 This is how the final costume turned out. I was advised by my eldest son that the symbol on the chest had to be there. I could forget other stuff but that symbol was a must. I hadn't even noticed it when I did my research on the outfit. 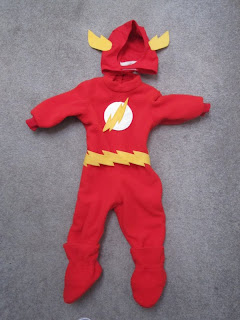 I made two pair of bootees. The yellow ones are for the costume and the red ones are to be sewn on after Hallowe'en so that the red fleece one piece can be worn when little Luc goes out daily with his dad. The centre symbol is just basted on and the belt has velcro on the back. I made the hood/helmet out of red flannel since it is two layers (it is fully lined) and fleece would have made it too thick.
It got the seal of approval and when little Luc tries it on, I will hopefully get a photo.

I have sewn a quilt top but it needs to be made bigger. Once it is put together I will post a photo before it goes on the frame. Right now though,I need to sort out sewing studio and bring it to some sort of order so I can find things.
Happy Turkey weekend!
Posted by Dolores