Yes, it is! It's early too!! It wasn't suppose to be out until the 1st of September but it arrived yesterday. 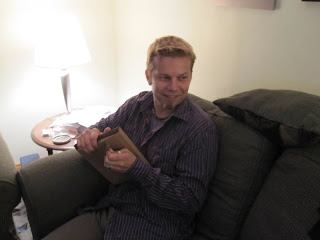 The BIG event had to be recorded  - regardless of what time it was... 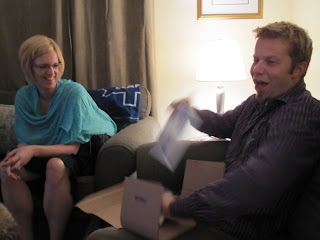 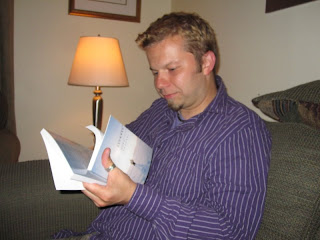 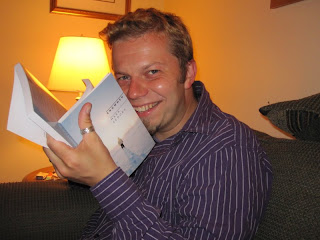 And, of course, every NEW BOOK has to be smelled. Yes there are two books there - these are the ones his brother pre-ordered but since he is in Spain, he lucked out. 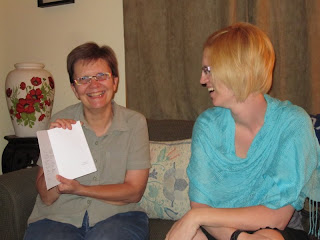 WOW, it's even dedicated!
(To my parents, Clare and Dolores) 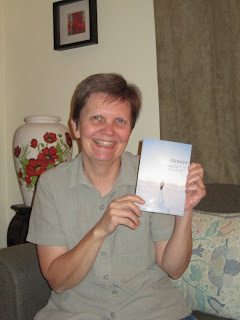 This is a commercial and a shameless plug, for all of you who didn't get it.

Here's the cover for a better look and ... 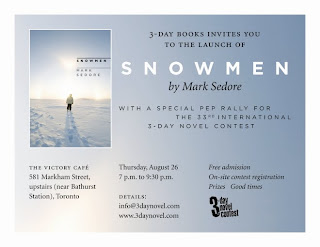 This is the invitation to the book launch - for those of you who are interested.
One more thing: Here's the very first review of the book from
http://www.uptownmag.com/2010-08-12/page6355.aspx
A winner in more ways than one
Snowmen, which took top honours in last year’s 3-Day Novel Contest, is a fast-paced, gripping tale about brothers

Quentin Mills-Fenn
How are you going to spend the Labour Day long weekend? Last year, Mark Sedore wrote a novel.

Snowmen (3-Day Books) won 2009’s 3-Day Novel Contest, the annual literary marathon. Winning manuscripts get published and, like all the 3-Day winners I’ve read, Snowmen is really quite good. It’s a fast-paced read, but it still manages to delve into a complicated relationship between two brothers.

Charlie is a decent guy, a music therapist. His younger brother, Larry, is a genius with a social disorder — he’s wildly successful, professionally, but a disaster, personally.

Larry lays two bombshells on Charlie: he has a brain tumour and he wants to walk across the Arctic Circle to raise money for cancer research. When Larry is unable to undertake the quest, Charlie fills in for him. Larry doesn’t like this at all and sabotages his sibling.

The book alternates between the antipodal brothers’ backstory, which relates the circumstances of their falling-out, and Charlie’s interior monologues on his lonely journey. Not directly addressed but intriguing to consider is any connection between Larry’s deteriorating mental health and his increasingly aberrant personality.

Sedore has produced a gripping and satisfying story which betrays no clue to its origins.

If you’ve got the inclination, who not do something productive next month and whip up a novel? You can make an outline, even collaborate with another person, but all writing has to be done during the long weekend, wrapping up at 11:59 p.m. on Monday, Sept. 6th. Register by Sept. 3 at http://www.3daynovel.com/. The winning entry will get published next year.
http://www.uptownmag.com/2010-08-12/page6355.aspx
Thank you for reading all this if you've made it this far. I am a proud and happy mom.
Note: The lovely young lady with me in the photos and wearing my favourite turquoise colour is Kate, proud wife of the new author.
Posted by Dolores