Well, the dress and matching hat are both done now and winging their way over to California for a wedding. Maili wanted a new dress to wear for the wedding of friends which is to be held in San Clemente, where she used to live. It will take place on the beach.

I showed the pattern for the dress a few posts back but here it is again for those of you who missed it and don't want to back track my posts (although you really should so you can read about the BOOK.)
I am not liking Simplicity's Project Runway patterns. They are supposed to be for beginners but I (who has been sewing garments for eons) didn't find the instructions clearly helpful at all - especially the way they laid it all out. Confusing! Never again will I buy one of them (but I do like Simplicity and their fit so I will still buy the regular patterns.) This past weekend I assisted a beginner sewer who purchased a skirt pattern that was one of these Project Runway patterns. Same deal - confusing, confusing as to "where do I find the next step?" Who writes these and do they go through a consumer test to see how helpful the whole written instructions are (are not!)? In my case, even the pattern pieces were dumb. The skirt part of the dress is identical in every way front and back and yet there were two pattern pieces in the package. They could have just had one and marked it "cut one for front and one for back." Anyway, enough of the rant! Here's the end result.

First up, the hat:

Actually, this is a photo of the fabric I used. I mentioned that the fabric was from my stash. It was a navy polyester piece that was 60 inches wide with a houndstooth check on it - shiny and dull. It was enough for the dress with a small piece left for a cocktail hat.

I made the buckram form and finished the edges. The form actually started out as just a rough piece of buckram that had been stretched on a head block. The whole thing was sort of misshapen (except for the top) and I cut out this teardrop shape from it. The darker parts that you see are actually some of the tin foil that I struggled to get rid of but the glue/hardening agent on the buckram would not give it up. The foil keeps the buckram from adhering to the block. Since the buckram was being covered up, I had to leave it. You can also see the scratches in it where I tried with a pin to score the foil and get it to release but, it wasn't meant to be - don't tell anyone it's there. 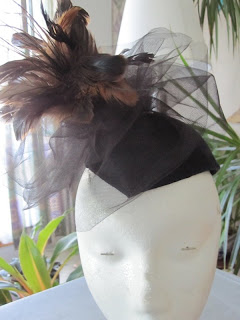 Here's my lovely model wearing the finished creation. A lot of design thoughts went into this. There was a lot of discussion as to what Maili wanted and how I was going to make this. I would like to thank Michael's craft store for the tulle and for that matter, the feather pick. They were the only store open on Saturday just before closing when I wanted some netting (I did have another feather pick that didn't make the final cut mainly because the stem part was so very thick.) Fabricland was too far to get to since we were on the road and on our way home.

I am showing this because I struggle with the dilemma of how to keep a cocktail hat on one's head. People use elastics - they look like they would go under your chin but they actually go behind your head. This would never do for me since my hair is fine and slippery. Combs are another way of keeping the hat on one's head. These are little, curved "pik" combs. Again, with me, it would not work. I know this isn't my hat and I know Maili has more hair than I do but I still struggle with the options. What I came up with while sewing the lining in, is little loops of thread (overlapped with blanket stitches) so that bobby pins or other clips can slide in and hold the hat to the head. This photo shows that there are three of these loops (click to enlarge.) The other thing I thought of was that if I had used a cotton or other non-slip fabric, instead of lining fabric, for the inside of the hat, it might not slip around. I thought of this even before putting the lining in but the sewer in me went with the lining fabric. It is totally hand made with the machine being used only to sew the bias tape on the buckram to hold the wire and finish the edges.

And here she is modelling the hat and the dress. She did want to see if the self bow at the bodice would have looked good but I did not have enough fabric for it. As it stands, I have maybe a rough 8" square and a bunch of long thin strips left of the fabric.
On another note, she told me that she was reminded that the actual ceremony will be on the beach and that she thinks the hat may be a bit over the top. She has a small daisy thing that she will probably wear instead.
Oh well, such is life - I am a mom and I can take it!
Now, I will go and sew something else. Stay tuned.
Posted by Dolores