Have you checked out my profile lately? I am now the proud grandmother of nine grandchildren. The month of October saw the early birth of two little ones, a boy and a girl. 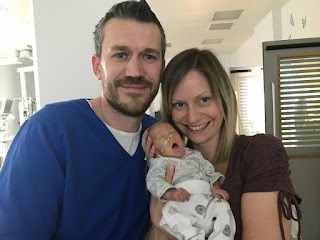 On October 8th my daughter Ayla and her husband David welcomed the birth of their son, Atticus Eliot Clarence. He was born prematurely but is doing very well and is now a whole pound more than his birth weight. I was in England at the time of his birth and got to see him almost every day for his first three weeks. 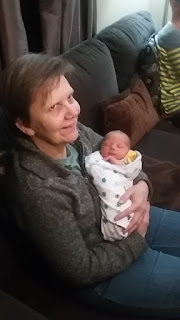 Exactly three weeks later, on October 29th, little Wren Margaret was born to my son Eric and his fiance, Davina. She was due November 10th but arrived a tad early. I had returned from England just two days before. Here's a photo of me and my newest little granddaughter shortly after she came home from the hospital.

That makes four grandchildren born in this sesquicentennial year.
I shall certainly be kept busy sewing, quilting and knitting.