The computer is fixed. It turns out that it was a software problem and fixable. Whew!
I would like to publicly thank my daughter whose lap top I got to use when she wasn't using it. That's how I managed to stay on top of my emails and blog surfing. It also was an enormous help so I didn't have to use the library computers. There, you usually have to wait for one and with my library, it is a 15 minute time limit.
Today is a real scorcher outside and it may break a temperature record. It is 31 (87.8 F) out there but feels like 39 (102.2 F) with the humidity. The record for today is 31.6.

I am still working on my list of projects and have photos BUT, with the fixing of the computer, I have to find my camera software to re-install it. So, for now here are some wee bit older photos (like from last month.) 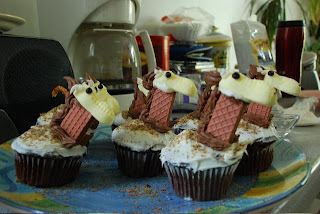 The theme of the party was horses. The young lady who threw the party was moving to Whitehorse (that's the capital of the Yukon Territory) to teach. My daughter, Maili, made these horse cupcakes to take to the party. Dad and I did the shopping for the chocolate wafer biscuits, the icing and the marshmallow peanuts (the horses' heads are soft marshmallow candies) 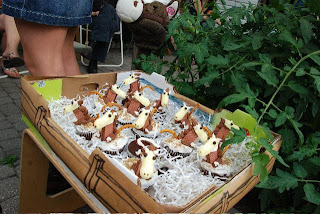 And, of course, they were brought to the party in their own corral. Very clever. 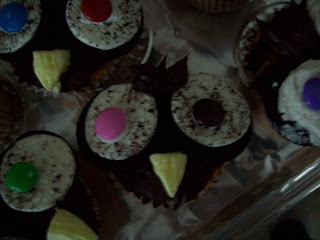 And then there was the birthday party. Again, Maili's friend threw the party for herself and invited friends. This time it was owl cupcakes. Sorry for the poor quality photos. This time chocolate cookies were used with the white icing in the middle of the cookie being put to use for the eyes - and then smarties were added. I see that the beak was, once again, the peanut marshmallow cut into a triangle. I think I would have had the same colour eyes on each but that's just me. Probably more fun this way. 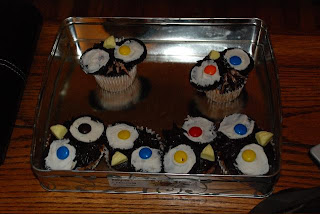 Here's the paliament (that's the collective noun for owls, honest, I'm not making it up - go see for yourself but you have to scroll down http://palomaraudubon.org/collective.html.) There were more but I guess they were shy and didn't want to be photographed. 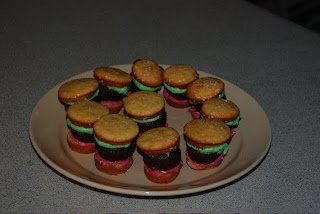 And lastly, mini burgers. Before Eric went out west to BC (he comes home today,) there was a birthday party for him and two others - but at our place. Two of them turned 25 and Eric turned 27. Big sis made mini burgers this time out. So, so cute. These were all made by the creative Maili with the help of the internet. Loads of ideas out there.
Many thanks to all my blogging buddies out there. It seems computer problems have been epidemic as I heard many other stories.
P.S. While I was without my computer, and while I was using my daughter's, I did manage to enter a couple of giveaways. I won a couple and will update you all later.
Posted by Dolores