I belong to a couple of facebook groups and one of them is knitting in Canada. A while ago there was a post about a hospital in Alberta (I live in Ontario) that wanted baby hats. There was a call out to knitters and there were specific guidelines. I think the number of hats wanted was 400. The yarn that they wanted the hats made from was one I had never used before - Bernat's Softee Baby in colours of Antique White, Gray Marl,  Gray, Mint and Lemon. There was also a pattern given. One ball of yarn made 6-7 hats. The request was mainly for knitters in the Alberta area but I was sure they would accept hats from anywhere provided the specifics were met.
Well, off I went to purchase the yarn. I ended up making 10 hats and sent them on their way. There was a deadline but that was April and I wanted to finish them quickly. They didn't take long to make - an evening while watching a bit of TV. I enjoyed making them and I was glad that my efforts were appreciated. I do hope they met - or exceeded - their goal. 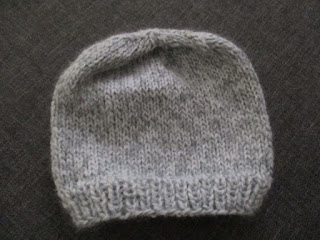 This is just one of the Gray Marl hats that I made. They aren't very big and the yarn was very soft.

I am now in England for an extended period of time. My youngest daughter, Ayla, gave birth to twin boys on March 13th and I came over to help her out. We are all in self isolation and thankfully, there is a park nearby.

Keep well and I hope this time passes quickly. I have supplies for knitting, sewing and reading so I shall keep busy.
Posted by Dolores