There are some people who don't like paper piecing but I don't mind it. Although it's an old technique, it's not that old a use in modern quilting. I remember the first time I saw it used was in a quilt magazine. It could have been Quilters' Newsletter. I never did try it then but I have done several paper piecing projects since. Some bird patterns come to mind - like a crow. They are fun patterns and there are some quilt pattern designers who specialize in the technique. I am a pattern tester for one such designer. Her name is Aimee Leptick. She designed a cute pattern for last year's Row by Row Experience. It was a bull dog with earphones on his head. If I find the pattern in my files, I'll show you. That's not the pattern that I tested though. 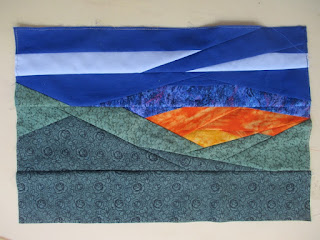 This is the one I tested. It's called Evening Horizon and Aimee designed the pattern for the Stonehenge Fabric Anniversary. She has made it with two different fabric lines.

Pop on over HERE  to read about it and there's a link to the pattern which is half price for one week only. It's a 12" by 18" pattern so it's not that big or difficult to put together if you are at all hesitant to do paper piecing. I had fun with it and it will get quilted and hung on my newly painted walls.
Posted by Dolores