I have always enjoyed live theatre and was even a subscriber as a very young teenager (I think I was 15.) I used to go alone. When I was 16, I worked as an usherette and it was the best part time job ever. Years later I mentioned that to my children and at least 3 of them have worked at theatres and my eldest son is a part time manager today. In the olden days people dressed up and refreshments were not allowed in the theatre at all. Times have changed but I still enjoy going to the theatre and yes, I do dress up. However, I do not bring a drink or food into theatre. Living in a big city has its advantages and here, in Toronto, we have many theatres both large and small. We even have Young Peoples Theatre where I brought my little ones years ago. 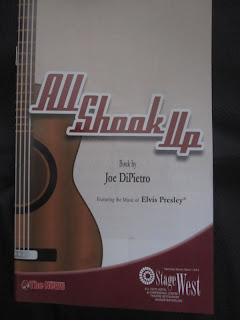 This past Sunday my husband and I went to see All Shook Up at Stage West, which is a dinner theatre. We, along with another couple, have been season subscribers for several years. This was a play and all of the music performed were songs that Elvis once sang, It was enjoyed by all of us.
Yesterday, I went to a matinee to see ... 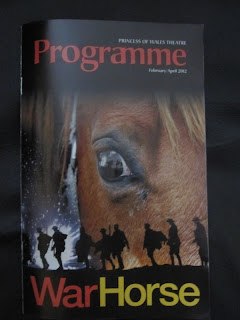 War Horse with my daughter Maili at the Princess of Wales Theatre. The tickets were a Christmas gift to me from my husband and it was really, really good. I loved the puppets and the minimalist stage settings. I don't know what it is with stage settings but I love the creativity of someone who can take the director's vision of the play and design settings in the small, confined space of the stage. The puppets were just wonderful and at one point I turned to my daughter and told her I felt sorry for the two that were worked to death. She just looked at me and thought I was nuts. The horse puppeteers did a marvelous job.
However, what I didn't like was the fact that some audience member forgot to shut off his or her cell phone. It was so disturbing because it went on for quite some time and I missed part of the play because of it. DUMB!! The other thing I really disliked was the fact that the lady sitting beside my daughter fell asleep during the second act. That really wasn't so bad but she snored! Yes, she snored. She had on dark sunglasses too. The only redeeming thing was that the loud shouting on stage or the very loud artillery fire (this is a war story) woke her up every once in a while - but then she promptly fell asleep again to snore away.
This was put on by a University of Toronto group called New Faces. My eldest son Mark took me to see it on the first night that it was on - March 8th. It ran for only 3 days and the night we were there, it was poorly attended. That was a shame because the group went to a lot of time and effort to put it on. Mind you, in my opinion, and also my son's, there was only one young lady who was worth her salt as an actress, but still, it was worth seeing. The others I think, just needed more time to mature as actors. Mark was curious about this Oscar Wilde play and his wife couldn't make it. He knew I would hardly ever pass up an opportunity to go to the theatre. After seeing it, I realized that I had seen the play done by a community theatre group a few years ago.
I must say, I have been lucky this month with my theatre-going - 3 plays in one month.
So, if you have a chance to go see these any live theatre, go. It will bring you joy. There may even be an amateur community theatre group in your area if you don't happen to live in or near a big city. Go out and support them.
Posted by Dolores