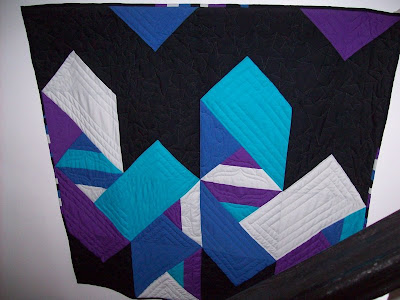 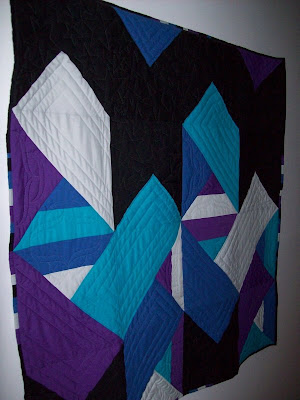 I have been thinking that I have not posted photos of my hall quilts in a while. This one, which is found beside the staircase (hence the awkward angle for the photo), is call Mid Night. It is made from a pattern that appeared in McCalls magazine many, many years ago. I borrowed it from the hospital book cart when I was having one of my children (can't remember which one it was.) Anyway, I made the pattern as it was in the magazine (that one is still a UFO since I do not know how to quilt it effectively) and then I decided I would make the quilt using the same blocks but in a totally different colour scheme and placed differently. The quilting is just something to fill in the big spaces and all the quilting is done in white thread. There are stars in three different sizes quilted in all the black areas. The label indicates that I finished it in March of 1993. (Click on the photos to get a better view of the quilting.) 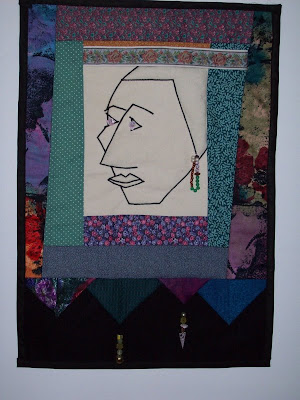 Further down the hall, by the basement stairs is P. Cassos's Broad. This was a fun little quilt to do. It was a guild challenge for a quilt show. If you wanted to participate, you were given a little brown bag with odd little things and I think you had to use everything. I did not alter any of the things I ended up with. I'm still not into beading (although I would like to be) and so her earring is just a string of beads that was in the bag. Her eyes are porcelain flowers with a hole in the middle. There were three of them and the other one is found in one of the two hanging things at the bottom. I freehand drew the face on a piece of muslin and then zig-zagged over the pencil lines. I still have another face that I want to do something like this with. The bag also had a length of ribbon and you can see it just above her head. I didn't sew it down but left it loose. It has a batt but I don't know what I used - probably a piece of flannel. It is machine quilted and I didn't even put a label on the back. I was probably running out of time. 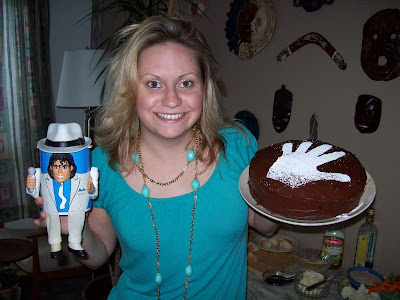 No this is not a quilt but a photo of the birthday girl Ayla, who would like to thank everyone for the birthday wishes. Since MJ died one week before, she thought she would honour him by incorporating him in her birthday. Big sis Maili made the cake (I held the template while she sprinkled icing sugar) and the cup/mug is dad's. Since he was a MJ fan, friends got him this years ago. It needed a bit of cleaning up since it was on top of the kitchen cupboards for quite a few years before being relegated to the inside of the cupboard.

P.S. the necklace she is wearing is one I had in grade eight(?) It belonged to my friend's sister who no longer wanted it and since I had a turquoise burlap dress (fully lined) at the time, she gave me the necklace.
Posted by Dolores