I am not a fan of doing repairs but some times, they have to get done. 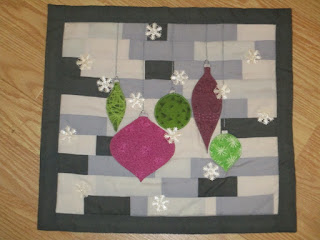 This is a small wall hanging I made in 2010 as a napkin challenge that a blogger had. I liked it a lot but gave it to my middle daughter Maili. 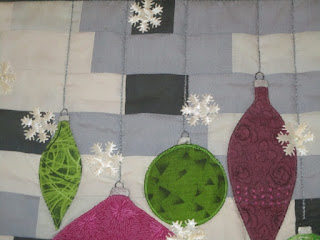 She gave it back to me just after Christmas because little Teemu decided to play with the little beads that held the snowflakes on. The snowflakes were in a baggie and it didn't take long to re-attach them with some extra beads I had.

I did other repairs but they weren't as pretty as this. I still have to hem three skirts but I think I will put a quilt together first. It's a lap size kit that was given to me and I plan on donating it to those that have lost everything in Australia due to the fires.
Posted by Dolores

Dolores
Wife, mother, mother-in-law and proud grandmother to ten adorable little people. Besides quilting, I love to sew garments, cross stitch, embroider, crochet and knit. My header photo of the Toronto sign in front of City Hall was taken by me in 2016.